Theatre Review: ‘Here We Are’ by Interrobang Theatre Company 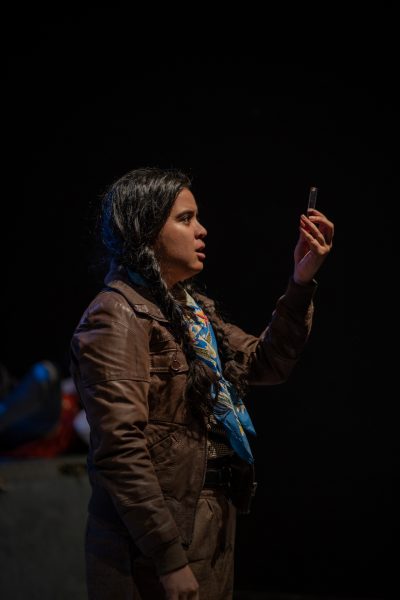 In early July of 1937 the greatest magician in the world performed a final disappearing act. To hear playwright Jen Diamond tell it, Amelia Earhart chose – sort of – to leave nothing of herself behind in our world: “Legacies are for the men who held the pen all along”, she tells us, during a gripping and poetic dance with death (and with Death) that forms the core of Interrobang Theatre Company’s current world premiere “Here We Are” by Jen Diamond, appearing for a final weekend at Fells Point Corner Theatre.

It just soars, full of lyrical cadence and poignant imagery.

Set in an afterlife abstraction, we meet the great aviator – let’s dispense with the gender-specific “aviatrix” – coming to terms with her life in the form of a high stakes give-and-take with the character of Death in a kind of absurd idea of “The Devil and Daniel Webster.” The always versatile and dynamic Mani Yangilmau is a slam-dunk casting choice as Amelia. They prowl the stage, calculating, negotiating with Death (David Brasington) and reliving Amelia’s best and worst life stories with help from a “Person Doll” (Griffin DeLisle) who shape-shifts at Death’s whim to become major figures in the retelling of Amelia’s life. In “Here We Are,” Death makes an enticing offer, promising what he knows Amelia wants most in return. It’s a dangerous bargain, and she does her best to manipulate the situation to her own advantage.

Yangilmau’s powerful presence is richly theatrical. They also produce some truly lovely moments when paired with DeLisle’s portrayals of Amelia’s brother, husband/manager, and copilot. As Amelia’s eyes stay squarely on the prize Yangilmau is all-in as well; there isn’t a single moment when one can catch them in the act of acting.

DeLisle’s physicality is astounding – completely real and true in showing us an empty vessel brought to life and character by the simple application of a few costume pieces – and his performance of a prone body being attacked by a murder of crows is a jaw-dropping bit of dance work.

As Death, David Brasington is a delightfully manic snake oil salesman, hungry for his victims’ stories. He knows where Amelia’s buttons are: “There is nothing to remember because there is no future to remember it in,” he tells her, in response to the simple request that “now that I’m nothing my stories must be nothing too.”

Kitt Crescenzo’s costume work is wonderful. Death looks like a cross between the Wizard of Oz and 1972 Brian Eno. Set against this, Amelia and the men in her life are simple, realistic, of-the-world. Jess Rassp provides a gorgeous set consisting of an elegantly straightforward painted stage, cyclorama for projections (lushly designed by Steven Burrall), and a very aeronautical-looking trunk that’s full of surprises. Sound design by Justin Lawson Isett is superb. And in the never-gets-enough-credit category, Chelsea Pace is a triple threat serving as dance, fight, and intimacy choreographer.

The actors do incredible work, the production design elements are marvelous, yet for us, the star of this show is the script. Jen Diamond’s work on this piece is absolutely poetic. The play is abstract – sort of – but nowhere does Diamond’s language fly out of orbit. It just soars, full of lyrical cadence and poignant imagery.