Theatre Review: ‘Icarus at the Border’ at Towson University 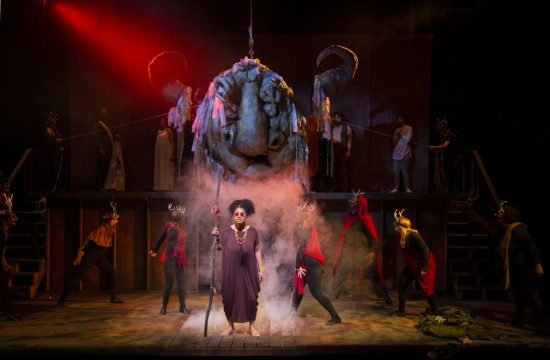 “The Queen is in love with the flying White Bull God.
Icarus inhales sweet, dangerous fumes at Delphi.
The Minotaur paces in his maze cave.
Blind Tiresias, the sage, sees all.
In a dream state, Freud imagines these archetypes on his couch.
Generals watch the sky on fire. “

A six-year collaboration between Towson University professor Dr. Tavia La Follette and South African director/playwright Malcolm Purkey has created a dazzling stage fable entitled “Icarus at the Border, a Meditation on Monstrous Appetites” appearing now through November 23 in the Studio Theatre of the Center for the Arts on TU’s campus. Billed as co-devisers and co-directors, the team of Purkey and La Follette give audiences a work of puppets, projections, percussion, and seemingly infinite theatrical possibility.

The play consists of plot elements woven together from Greek mythology and themes that are both timeless and contemporary: addiction, nationalism, trauma. In it, the titular Icarus’ final flight is perhaps one of fancy, and the outcome is in doubt except at a macro level.

The performances are consistently brilliant…

“Everything you are about to see is a lie” is video-projected at the start of the show, readying patrons for the intense work of invention to follow. Next, we meet Daedalus (Alex Wynd) and Tiresias (Kendra Hyater-Davis) as the former works on his flying contraption and the latter warns of its implications: ” …bombs in their bellies and plague in their blankets… “

A General (Justin Henderson) and a Queen (Anna Steuerman) appear, gravely concerned about their failure to produce an heir. For the Queen, an invention from Daedalus or a potion from Tiresias – or both – may fit the bill, though probably not in the manner intended.

Freud (Daniel Rosen) and his time-traveling patient DH (Aryamar Colón-Pappaterra) join the tapestry with their own story. DH ultimately asks: “Where does a dream end and the psychosis begin?” as an Aztec earth goddess, a suffragette, and a Soviet fighter pilot all speak of sacrifice; and the Queen’s eventual progeny, the Minotaur (Justin Oratokhai), and his BFF, Icarus (Jacob Sanchez) fight to remain together against the General’s lust for vengeance.

Artfully connecting all of these is a masked and antlered chorus and a pair of live percussionists. These give the production its considerable backbone, along with puppets by Dr. La Follette, costumes by Ava Ertel, set by Daniel Ettinger, lighting by Gene Ethridge, and projections by Jay Herzog.

The performances are consistently brilliant (particularly for a student production), the design elements are awe-inspiring, and the direction is brisk and urgent. “Icarus at the Border” is must-see.

The Towson University Department of Theatre Arts’ production of “Icarus at the Border” runs through November 23 at Center for the Arts, 7700 Osler Drive, Towson, Maryland. Click here for tickets and information.