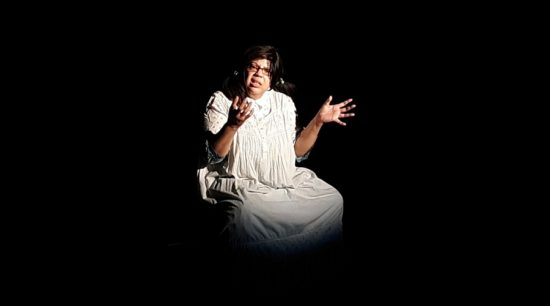 Veteran Baltimore director Rosiland Cauthen has another hit on her hands with the Arena Players’ production of George C. Wolfe’s “The Colored Museum.” This is an early (1986) play by Wolfe, whose writing credits also include “Jelly’s Last Jam” – though he is perhaps better known as the Tony-winning director of two Broadway classics of the 1990s: “Angels in America” and “Bring in ‘Da Noise, Bring in ‘Da Funk.”

“The Colored Museum” is a dazzlingly entertaining collection of artworks. There are eleven in all, consisting of archetypes, stereotypes, and prototypes of the African American experience. We view the exhibits in series, with the ding! of an elevator to let us know that we’ve moved to another floor and another story. A wonderfully talented cast of six actors performs these small works, most of which are monologues, with a few ensemble pieces.

Arena Players’ “The Colored Museum” is an absolute treat!

The writing is extremely sharp and quite fresh despite its age. The direction is tight, with not a moment nor movement wasted. The acting is a real treat – these performers demonstrate a full awareness of the quality of the material and truly bring their A games.

Opening the evening we’re introduced to Miss Pat (Pamela Sparks), a flight attendant whose pre-departure speech involves a great deal more than securing one’s tray table. Suffice it to say that, on this voyage, shackles must be worn until the captain turns off the light; and earphones can be purchased for the price of your first born male child.

Upon arrival at our destination in the New World we spend time with Aunt Ethel (Lisa Wooten) and her Home Cooking Show; a pair of “black and fabulous” automatons trapped inside Ebony Magazine; a pair of wigs engaged in a hilarious argument over which will be worn for an important lunch date; an upwardly mobile man (Jamaal Amir McCray) who disposes of the trappings of his youth and even – in a reverse Endgame moment, sort of – trashes his younger self (Isaiah Evans).

The highlights of the collection include Joshua Dixon’s military monologue as Junior Robinson, a soldier whose surrealistic experience with napalm has changed him in extraordinary ways. The writing is abstract and stylized, and Dixon’s delivery is absolutely riveting. His character knows “the secret to your pain” and offers a sinister remedy. Disco denizen and “snap queen” Miss Roj (McCray) is all power and patois in the only exhibit in the museum whose writing feels a bit dated; and we couldn’t care less, thanks to McCray’s ecstatic and heartbreaking performance.

Possibly the best artwork of the collection opens the second act. In a kind of Masterpiece Theater meets Lorraine Hansberry’s and John Waters’ love child, we have the “Mama on the Couch Play.” It’s a silly farce, then complete absurdism, and at one or two points it’s a darker oh my, what just happened? kind of tale. Tesey Phillips does stellar work here as the Lady in Plaid, as do Dixon as the narrator (and slap foley) and Evans as Walter Lee Beau Willie – killed for the crime of overacting and resurrected with the rousing musical number “Why Couldn’t he be Born into an All Black Musical?”.

Arena Players’ “The Colored Museum” is an absolute treat!

Running Time: 111 minutes with an intermission.

“The Colored Museum” plays through November 17 at Arena Players, 801 McCulloh Street in Baltimore. For tickets call (410) 728-6500 or purchase online.