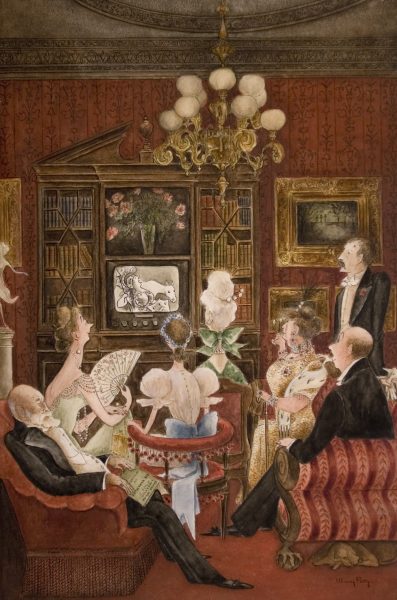 The Mitchell Gallery at St. John’s College, Annapolis, is currently exhibiting The Life and Art of Mary Petty.   Mary Petty (1899-1976)  and her husband Alan Dunn were artists for the New Yorker magazine during the mid-twentieth century. Because this exhibit is also about her life, works by Dunn are also included.

New York  society was and is focused on the arts, and thus several of the paintings and illustrations represent high art, including opera and theater. One watercolor and ink, Mrs. Peabody and Guests Watching Television (1950), shows very fashionably dressed family members watching the opera Die Walküre by Richard Wagner on television. The seven figures in the picture are dressed, not for a casual evening at home watching television, but dressed up as if for the opera in gowns, tails, and opera gloves.  One man even holds a program or playbill for Die Walküre, but those who know the opera well will recognize the scene the artist has painted on the small black-and-white TV of  Brünnhilde and the horse she rides.  There are humorous touches:  the husband, for example, is asleep as one might expect a husband would be at a real opera!

In “Peabody Mansion Ball” (1948), Mary Petty even arranges the painting like a theatre.  The maid represents the audience in the balcony looking down at the performance, a society ball.  Below is an “orchestra pit” which includes a pianist, violinist, and a cellist.  Here and in other paintings by Mary Petty, there is “dead space” or relatively little detail at the top of the canvas, so the layout artist could then overlay necessary information on the cover, such as the title of the magazine, the month and year, and presumably the price of the issue.  The Mitchell Gallery kindly provides two current issues of the New Yorker as part of the exhibition, so the visitor can compare the final look of the cover to these originals before they were edited for publication. 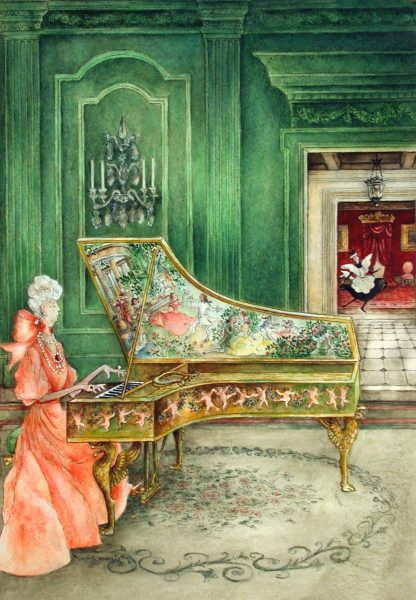 The “Peabody” name mentioned above refers to a wealthy family:  two characters on view in many of the covers are Mrs. Peabody and her maid Fay.  In another painting related to the arts, Mrs. Peabody is shown in a long flowing gown playing a harpsichord (1961).  Beyond a slight cartoon-like quality, we see Mary Petty’s skill as an artist with free-spirited dancing figures on the harpsichord painted in Rococo style.  The maid Fay, who should be doing her housework, is seen in the background dancing lightly but enthusiastically in a red room with velvet curtains.  The name Fay also means “fairy,” and in this painting and others, the white part of her black-and-white maid’s uniform resembles fairy-like wings lifting her up in the air.

In Fay Summoning Huntress, Fay is calling upstairs to Mrs. Peabody (“the Huntress”) to go hunting using what looks like a ram’s horn.  Here again there is something theatrical in how Mary Petty “sets up” the picture much like a staged scene.  Doors frame an outside, stage-like setting with hunters holding pistols accompanied by their dogs.   Fay is the musician in the scene and the viewer the “audience.” 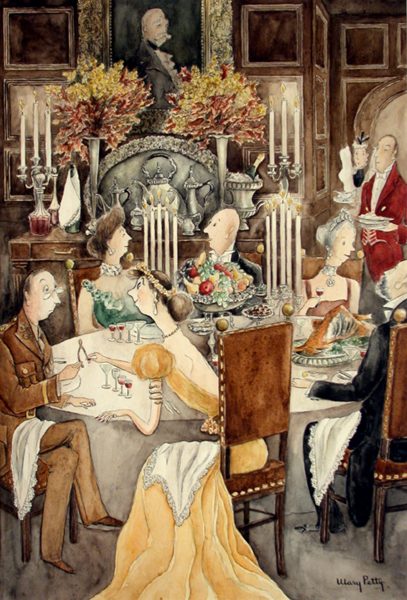 Some Thanksgiving seasonal fare in the Life and Art exhibition:  In Mary Petty’s Thanksgiving Dinner (1944), a man and a woman are breaking a wishbone from a turkey.  The soldier might be wishing for the end of war, since the image was illustrated during World War II.  The woman’s wish and a smile on her face suggest she might be wishing for romance with the soldier! 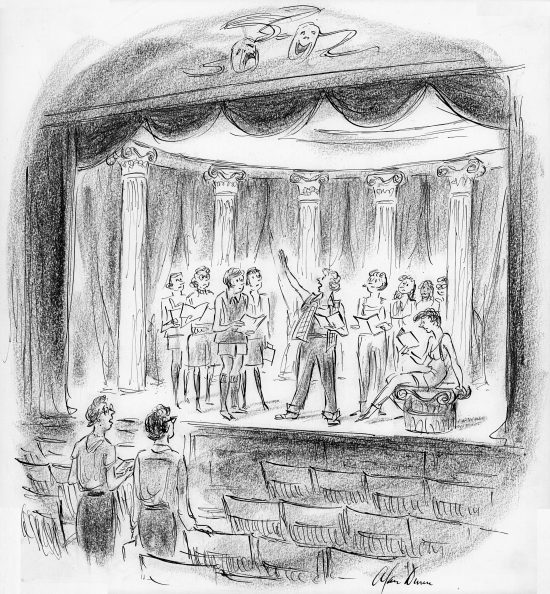 One cartoon by husband Alan Dunn in the exhibition shows the obscure humor for which New Yorker cartoons are noted. The 1963 sketch in crayon and ink depicts a rehearsal for a production of an ancient Greek tragedy by Euripides. Classical costumes and Ionic columns are present, but it is clear the director is making some non-classical changes: “I figure what Euripides doesn’t know won’t hurt him.”  Another sketch in the early days of the nuclear age shows a horseshoe over the door to a nuclear physics laboratory.

Mary, too, can be quite whimsical, as in her cover Modern Ghost in a Modern House (1949). The house furniture shown in a darkened room is very modernistic. In order to match, the ghost is painted abstractly like Picasso-style modern art, for the head has suggestions of Cubism with out-of-place facial features.  In  Family Portrait Being Painted (1948), a painter is shown painting a family portrait in the style of Mary Petty.

The New Yorker cover Mrs. Peabody in Gazebo features a house on the left is reminiscent of the house in the Addams Family. While most of us today might know the Addams Family from the television series and films, it is worth remembering that Charles Addams, the creator of the franchise,  originally published his Addams Family as cartoons in the New Yorker.  Mrs. Peabody in Gazebo also demonstrates how Mary Petty enjoys using anachronism in her art.  The costumes are Victorian or Edwardian, but the radio Mrs. Peabody is listening to as she knits is from the 1940’s and is ultra-modern for the time.  Returning to the theme of drama, she seems engaged next to the radio as if listening to a radio soap opera!

In sum, those interested in visual art media along with views of the mid-twentieth century theatre and art scene will want to have a look at these unusual New Yorker art offerings at the St. John’s College Mitchell Gallery.  The Life and Art of Mary Petty runs through December 15 and is well worth the trip as Annapolis prepares for the holiday season.

Biography:  Cordelia Dreisonstok is a music and arts major at Catholic University of America in Washington, D.C.  She is also an illustrator for magazines.