Theatre Review: ‘Fiddler on the Roof’ National Tour at the National Theatre 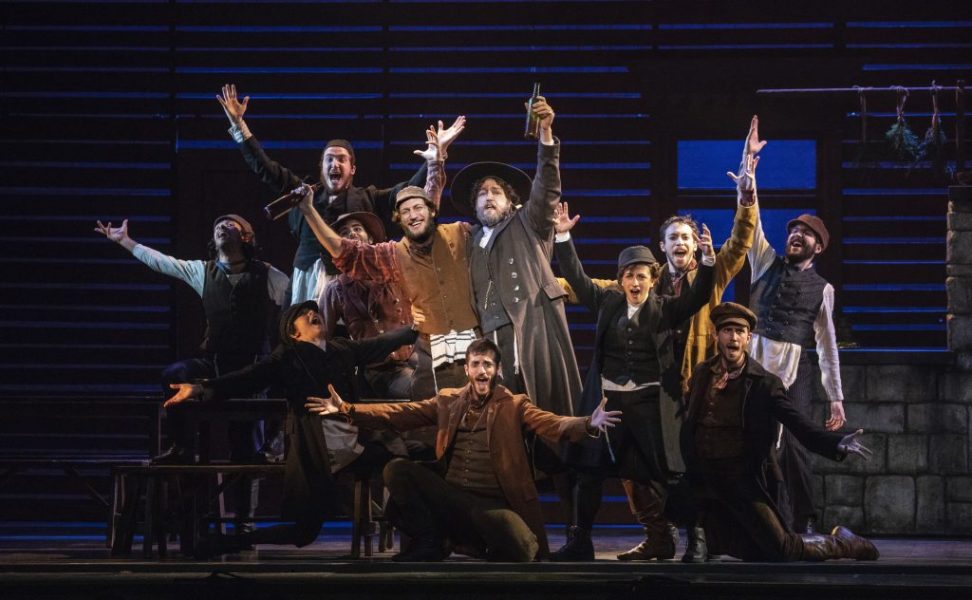 Yehezkel Lazarov, Jonathan Von Mering and the cast of Fiddler on the Roof. Photo by Joan Marcus.

Family, tradition, and community once again take center stage when “Fiddler on the Roof” stops by the National Theatre for a week-long stay. I am happy to report Tevye, the loveable milkman, and the far away Russian village of Anatevka is still worth a visit, courtesy of the Bartlett Sher-directed production, now on its second year on tour.

Sher has made a name for himself directing compelling revivals of musicals from the Golden Age, such as “South Pacific,” “The King and I,” and the recent “My Fair Lady.” His production of “Fiddler” opened on Broadway four years ago starring Danny Burstein as Tevye.

Don’t miss this trip to Anatevka.

Following in Burstein’s footsteps – and many other former Tevyes – the brilliant Yehezkel Lazarov dons the milkman’s prayer shawl on the tour. Lazarrov effortlessly commands the stage with an easy charm and impeccable timing. Throughout the production the leading man has the ability to elicit a belly laugh one moment and break hearts the next, as he puts his own stamp on the titular role.

One of the hallmarks of Sher’s production are bookended moments that frame the story, hinting at a modern context, beginning with a figure in a red, modern coat reading from an old book (perhaps Shalom Aleichem’s original stories) and kicking the show off with the opening lines, “A fiddler on the roof. Sounds crazy, no?” The man is Lazarov, who quickly removes his parka and steps into Tevye’s role as the central character. Sher did this with the permission of lyricist Sheldon Harnick and the estates of composer Jerry Bock and book writer Joseph Stein (now both deceased). This small innovation, adding a dose of contemporary symbolism, does not diminish the rest of the faithful production. After Lazarov becomes the effusive milkman, the rest of the show unfolds with all the brilliance and heart we’ve grown to love, thanks in no small part to his commanding performance.

Speaking of the production itself, Michael Yeargan’s impressionistic scenic design looked right at home on the venerable National Theatre stage. Utilizing wide open spaces, with scant representative backgrounds, the settings brought the little village of Anatevka into focus, assisted with an artistic flair by Donald Holder’s precise lighting design. One of Sher’s frequent collaborators, costume designer Catherine Zuber provided the earthy tones and fabrics of the 1900s Jewish shtetl as well as the whimsical nightmare look of the zany visitors in “Tevye’s Dream;” this section reminded me of a Tim Burton fantasy, fitting the scene like a glove with extra long fingers.

All of these elements merely came together to serve this veritable classic musical, so well-written and likewise executed, “Fiddler on the Roof” has lost none of its luster over the years. Sher’s breezy staging – recreated by Sari Evans – kept moving swiftly, aided by the dynamic choreography by Hofesh Shechter, recreated for the tour by Christopher Evans. Credited as inspired by the original work by co-creator Jerome Robbins, the dances literally lept off of the stage, into the air, and captured the ethnic flavor of the old world while embracing a freedom of expression that crackled with excitement. The opening, “Tradition” gave a nod to Robbins but worked its own kinetic magic, as did other moments throughout the evening.

Lazarov is skillfully supported by an energetic company, starting with his sharp-tongued and big-hearted wife, Golde, played with saltiness by Maite Uzal. Her scenes with Lazarov were equal parts comical perfection and the warmth of a 25 year marriage. As the older of their five daughters, Kelly Gabrielle Murphy, Ruthy Froch, and Noa Luz Barenblat make strong impressions as Tzeitel, Hodel, and Chava. Froch wraps her gorgeous soprano voice around one of Jerry Bock’s most haunting ballads, “Far From the Home I Love,” her goodbye song to her family and life in Anatevka. Barenblat’s memorable performance as the third daughter is heart-breaking, especially when she performs the dance “Chavaleh” while Lazarov sings the simple, haunting lullaby

As the young men who challenge tradition and take the dairyman’s daughters away to uncertain futures, Nick Siccone, Nic Casaula, and Jack O’Brien take the stage. Siccone, channeling a young Woody Allen, is perfect as the nebbish tailor who steals Tzeitel’s heart, Motel. Casaula offers a stark contrast as the headstrong Perchik, a radical student who woos Hodel off to Siberia. Motel and Perchik also have to win over Tevye, but they have the advantage of being Jewish, too. This is not the case with Fyedka – played by O’Brien -a Gentile outsider to the shtetl. As Tevye and Golde have to swallow many changing traditions, Chava marrying outside their faith is the most bitter pill of all.

As the village’s omniscient matchmaker, Yente, Carol Beaugard nails each of her comedic lines and scenes. As the affluent and prickly town butcher, Lazar Wolf, Jonathan von Mering underplays his scenes while serving as a delightful foil to Tevye. The tavern scene where Lazar and Tevye misunderstand each other about Tzeitel as a bride and Tevye’s new milk cow is comedy gold, especially as performed by von Mering and Lazarov. The scene is topped off by a most exciting and zestful rendition of “To Life (L’Chaim).”

In the silent yet pivotal title role, Ali Arian Molaei provides an elegant reminder of the best traditions the citizens of Anatevka must leave behind as they are being pushed out of their home.

If there is any doubt at this point, allow me to state the obvious: this review a rave. “Fiddler on the Roof” is a well-known classic and this production only solidifies its status as one of the gold standard musicals of the American stage. Don’t miss this trip to Anatevka.

The national tour of “Fiddler on the Roof” runs through December 15 at the National Theatre,1321 Pennsylvania Avenue NW, Washington, DC. For tickets, call 800-514-3849, or click here.