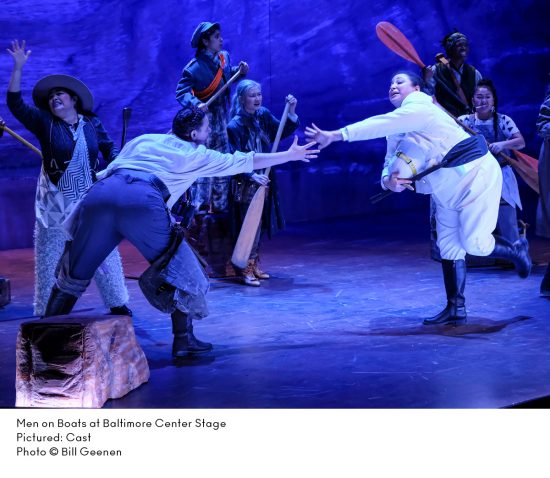 In the summer of 2017, the (tragically) now dormant Cohesion Theatre Company closed its third season with the area premiere of a brilliant new play by Jaclyn Backhaus called “Men on Boats.” Two years later, the play – and a member of its Cohesion cast, Cori Dioquino – both find themselves engaged at the “State Theater of Maryland,” Center Stage. Smalltimore! Dioquino is a member of CS’s teaching artist staff, and “Men on Boats” is a member of its 2019-2020 mainstage season.

Based on real events, “Men on Boats” theatrically recounts a federally sponsored expedition shortly after the Civil War to explore and map the Colorado River and its environs, including one very, very large Canyon. A ragtag band of soldiers, adventurers, and ne’er-do-wells, led by the one-armed John Wesley Powell (Ceci Fernandez), set out to tame the West (and its native inhabitants), name things after themselves, and create the stories worth writing home about. It’s a testosterone-fueled death-defying joy ride; the stuff of legend. This 19th century yarn becomes a 21st century play through a kind of lens we aren’t accustomed to – not a John Ford western, not a Disney “docutainment” film, not even a Billy Crystal parody: “Men on Boats” was created by a woman playwright with the intention of having it produced and performed by women. The result is surprising, captivating, and spectacular; un-ironically dazzling.

Expedition leader Powell’s missing arm is achieved by actor Fernandez wearing a baggy shirt with the left sleeve knotted off. The effect fools no one, and it isn’t meant to. Similarly (and with the kind of magical delight that only ever happens in the theater), characters who find themselves overboard and underwater display this dire occurrence by pulling rubber fish from their pockets and waving them in front of their faces as their arms flail akimbo in the manner of a used-car-lot noodle balloon. Campfire smoke is delivered by an aerosol can. The papier mâché boulders absolutely look like papier mâché, as if the props department tried very hard to make them look like someone slightly less competent tried very hard to make them look real – they remind one of the This is Spinal Tap Stonehenge monument, as a matter of fact, in both effect and intention.

As a theatre scene, Baltimore is gaining a reputation as a birthing-place of new plays – and it is wonderful to see one of them which has “graduated” return to Charm City at the regional theater level. Center Stage’s “Men on Boats” is worth a visit!

Advisories: Profanity (and lots of it), simulated gunshots.