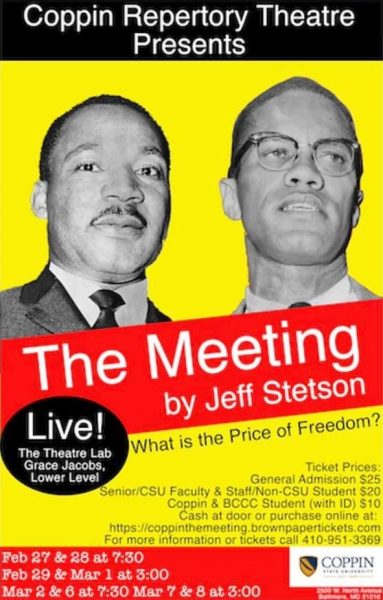 Audiences in Baltimore are extremely fortunate to have not one but two of the most accomplished HBCU theater programs within their City’s limits. On the east side is Morgan State University and its Murphy Fine Arts Center (presenting August Wilson’s “The Piano Lesson” through February 29); and on the west side is Coppin State University, home of the James Weldon Johnson Auditorium as well as an intimate and flexible black box space in its Jacobs Building. The latter is the venue for Coppin Repertory Theatre’s powerful production of “The Meeting” by Jeff Stetson.

The play is set in a Harlem apartment on Valentine’s Day, 1965. It’s the evening immediately following the fire-bombing of activist Malcolm X’s home, and he has invited the Reverend Dr. Martin Luther King, Jr. to meet with him in private. X (Tavon Pittman) and his nervous bodyguard Rashad (Mark Matthews, Jr.), await King’s arrival, arguing over the meeting’s purpose and X’s safety. The men play at metaphors to chess: Rashad consistently wins when the two play, because his aim is to protect his king. X responds “Maybe it’s time to protect the pawns for a change.”

…powerful …This show is absolutely not to be missed.

Dr. King (Ryan Pratcher-Bey) makes his appearance, Rashad exits to stand guard outside, and the civil rights icons thrust and parry over philosophical and strategic disagreements. The air is thick with accusation – disapproval – as the men mock each other while harboring a quiet undercurrent of mutual respect. “You’d be amazed how much one can take, when the purpose is clear,” King boasts. “Ignorance is sometimes the sincerest form of flattery” is X’s reply. They struggle to persuade each other towards course correction, highlighting their differences: “Your people want to be able to buy a cup of coffee. My people want to own the coffee shop,” X proclaims. Probing for an opening, he asks King “If you can’t change, can you at least get angry?”. The pair discuss their separate movements, their potential legacies, and even their likely early deaths: “If they kill me first, you’ll have nothing left to negotiate against” X states. “If they kill you first, I won’t be allowed to live.”

There are also lighter moments, including literal arm-wrestling which helps the men find common ground: “Just imagine what would’ve happened if we had joined hands and pushed in the same direction.” Their daughters also serve to connect them. King comes to the meeting with a gift from his daughter to X’s – her favorite doll, meant to replace what may have been lost in the family’s fire that day.

Michael D. Klima’s set and lighting designs are clean, bright, and effective. Sound and video projections by James A. Brown are just the right enhancements to serve what might be a slightly static script at times. Dynamism is achieved, though, by exuberant direction from Willie O. Jordan and fierce performances of all three actors. In the role of Malcolm X, Pittman is full of swagger and flippant snark. He’s casually flinty, with a smugness that’s more tired than bitter. Pratcher-Bey approaches Dr. King with all the bombast of a southern baptist preacher, his almost operatic passion belying, perhaps, just a touch of envy. Neither of these actors is a perfect doppelgänger for his character, but that’s far from the point. They both have obviously spent many, many hours studying film and absorbing the style of movement and vocal cadence, diction, and inflection of the men they’re portraying. Doubtless they received lots of help from the production’s dramaturg, Eugenia Collier. Their performances are absolutely mesmerizing, and Matthews’ support as Rashad is perfect. This show is absolutely not to be missed.

A helpful map of the Coppin campus is available here. All performances are followed by an informative and engaging talk-back, curated by Mirma Johnson-Majors.