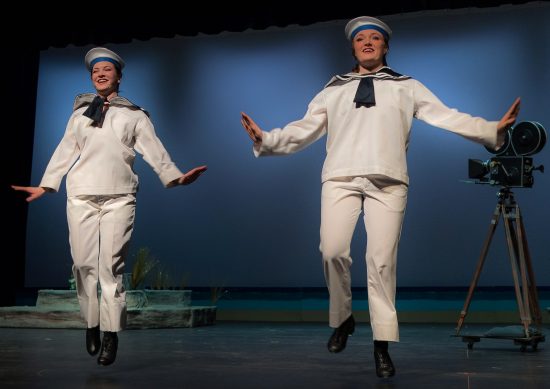 Two World War II-era sailors tap-dancing along “on the town,” so to speak, visit a movie studio with a vintage movie camera ready to film.  “What Ought We to Do?”  In this conceit, the current production being filmed is Gilbert and Sullivan’s operetta “Pirates of Penzance.”  As the orchestra tunes its instruments, it is as if one sailor says to another in the words of Gilbert and Sullivan, “Hush, Hush, Not a Word.”  Deco fonts screen titles and stars.

So begins the Victorian Lyric Opera Company current production of “Pirates,” giving a unique “classic Hollywood treatment” to G&S’ tale of a young man indentured to pirates who intends to leave this discreditable way of life.  Yet he is prevented from doing so by his “sense of duty,” of which the Pirate King (an ebullient Jonathan Caudill) always reminds him.  In a plot development which is timely for our current February in leap year 2020, it turns out this young man, Frederick by name, was born on February 29.  He thus cannot leave the band of pirates on his “21st birthday,” as this is technically decades in the future!  Indeed, it is to be 1940, the era to which this production, directed energetically by Amy M. Sullivan, pays homage.  Here is the Victorian past as well as the American past.

‘All is prepar’d; your gallant crew await you,’ as ‘Pirates’ lyricist W. S. Gilbert would say.

Parts of the production bring out subtle as well as not-so-subtle classic Hollywood tropes and stylistics, such as emphasizing puns about piracy and the musical number “With Cat-Like Tread, Upon Our Prey We Steal.”  This song which has a Broadway-like musical sound and an effective Hollywood rotating spotlight effect under the sure hand of lighting designer Matthew Bailey.

While classic Hollywood and 1940’s fashions serve as a framing device, we are brought into the Victorian original as proper young maidens refuse to offer reformed Frederick (an agile and talented Billy Binion) their pity – that is, until Mabel— played by Rebecca Kaye—makes her “Hollywood entrance” employing impressive vocal range and mastery of scales.  In order to visually distinguish Mabel from the other fair maidens, costume designer Stacey Hamilton has conveniently “color-coded” Frederick and Mabel in peach colors;  likewise, other couples are paired in mirroring colors.  Additionally, there is a pleasing blend of both Victorian and 1940’s costumes throughout the show.

This unusual production brings classic Hollywood and comic opera traditions well– “from the Victorian Age to the Jazz Age,” as stated in the program notes.  Actress Colleen Robinson Miller likewise blends both the characters of Ruth and a studio movie actress to great comic effect.

In an enjoyable dual role, Gary Sullivan plays Major-General Stanley and the Hollywood film director in the outer frame. Mostly sitting on the side of the stage with stereotypical director chair and megaphone, he suddenly leaps in, assumes character, and sings the patter song “I Am the Very Model of a Modern Major-General,” with an additional verse referring to auteur film directors Alfred Hitchcock and Cecil B. DeMille.  Or following the spirit of the production, he sings lyrics not only “mathematical” and “quadratical” but adds the “cinematical!”

Interestingly, the cinematic approach sometimes suggests new associations for those who know and love vintage Hollywood movies.  A humorous skit using “orphan” and “often” as word misunderstandings, for example, almost seems to prefigure Hollywood Abbott and Costello routines such as “Who’s on First?”  Perhaps the “comic opera” and “classic Hollywood” worlds really are not so far apart!

Leaving the “vintage Hollywood” theme behind for a moment, there are some other lovely cultural references as well: Jugendstil stained-glass windows; the men singing the hymn-like “Hail, Poetry” in exaggerated praise of poetry in a brilliant chorus; Shakespearean concepts of a play-within-a-play as well as having two dialogues go on at the same time on stage, as the audience has to suspend disbelief that the characters do not hear each other in “Hush, Not a Word.”

The music!  The show!  The stars!  Like the two sailors who look like they have come out of MGM’s “On the Town,” stroll by the F. Scott Fitzgerald Theatre and watch your favorite Gilbert and Sullivan tunes performed  from “Pirates of Penzance” in classic Hollywood style. “All is prepar’d; your gallant crew await you,” as “Pirates” lyricist W. S. Gilbert would say.

Running Time:  two hours and twenty five minutes, including a fifteen intermission during which the orchestra (directed superbly throughout by Amy Nicole Broadbent) plays the “El Capitan” March of John Philip Sousa, thus sampling the  VLOC’s next production in June.

“The Pirates of Penzance” plays through March 1 at the Victorian Lyric Opera Company performing at the F. Scott Fitzgerald Theatre at the Rockville Civic Center – 603 Edmonston Drive, in Rockville, MD. For tickets, call the box office at (240) 314-8690, or purchase them online.