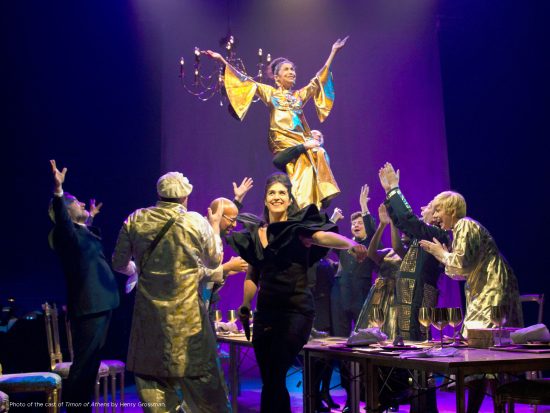 The cast of ‘Timon of Athens.‘ Photo by Henry Grossman.

“Timon of Athens” is certainly not a play that gets done very often. And it is not filled with the memorable lines or plot twists that such Shakespearean gems as “Hamlet,” “Macbeth,” or “Romeo and Juliet” have to offer. But director Simon Godwin has certainly worked hard to make this lesser known work a compelling piece of theatre with a magnificent central performance by Kathryn Hunter in the title role.

Godwin, the new artistic director of Shakespeare Theatre Company, has brought his stunningly relevant production to the Klein Theatre at the Lansburgh after it made a splash in the United Kingdom at the Royal Shakespeare Company in 2018. He remounted it as a co-production with the Theatre for a New Audience where it ran just before coming to DC. So the acting company is seasoned and the production is in fine form, a great sign as Godwin makes his debut as director for the premiere classical theatre in our region.

A hallmark of this production is the gender-swap for not just the title character but several others as well. As has been widely reported, Kathryn Hunter turns in an indelible performance as Timon – now Lady Timon. As this is a less familiar Shakespeare – with an assist from Thomas Middleton – I know it made no difference to the understanding of the character or her tragic downfall that it was written originally as a male character. Godwin and his co-editor of the text, Emily Burns, made enough cuts and slight revisions as to render the script clean as a whistle. Hunter’s commanding stage presence – made even more poignant due to her tiny frame – simply filled the stage with a towering performance. (More on her later.) Another major gender shift was to make the Athenian army captain Alcibiades a female soldier, played with stern conviction by Elia Monte-Brown. As with Timon, my unfamiliarity with the these characters allowed my imagination to simply accept them and be taken in by the story.

What is “Timon of Athens” about? To put it simply: a generous benefactor and gregarious host is surrounded by a cadre of fair-weather friends and needy hangers-on at one of her sumptuous banquets. Of course, Timon sees these people as she wishes to see them, until she is forced to see the truth: they’re only there when her generosity flows. When her trustworthy steward Flavius – memorably played by John Rothman – finally convinces Timon that she is bankrupt, she sends servants to borrow from all those friends whom she supported. The servants return empty-handed and Timon decides to exact revenge against the so-called friends who rejected her plea for financial help.

As staged by Godwin, the first banquet, when Timon’s fortunes are not in question, serves as a mere teaser to the second, a true coup de theatre. Timon’s hospitality masks her rage only to a point and when she reveals her vengeance, the elegant feast turns into a veritable bloodbath in a matter of seconds.

Timon’s inevitable downfall is also clearly presented – as she moves from her gold-tinted surroundings to the lowest of stations – a hovel in the woods, surrounded by found objects, digging into the earth, while living on roots. Watching Hunter contort her body into nearly impossible configurations as she dug into the dirt reminded me of the lowly state King Lear ended up in, raging in the wilderness tinged with madness. Timon, on the other hand, makes a clear decision to leave the comforts of home and city and sees clearly there is only, perhaps, one honest man anywhere: her loyal Flavius.

While Timon is favored and then banished, she is surrounded by those who wish to take advantage of her open nature and goodwill. The actors who inhabit these sycophants are all excellent: Liam Craig, Shirine Babb, Julia Ogilvie, Daniel Pearce, and David Quay. Each of these actors also take on various other roles during the production, all solid performers. As do Zachary Fine and Yonathan Gebeyehu as an artist and poet, respectively, who crave Timon’s patronage when times are flush. Helen Cespedes and Adam Landgon portray faithful servants who turn revolutionaries.

Matching Hunter’s performance throughout the play is the sharp Arnie Burton as the cynical but always truthful philosopher Apemantus, dressed like an aging hipster. Burton’s character offers stark contrast to the other characters who feign loyalty while Timon’s fortunes are full. Apemantus confronts Timon with the true nature of men and women early on, but it is too late when Lady Timon sees the truth for herself.

Godwin’s designer for the scenic and costume elements Soudra Gilmour provides a stunning landscape for both the gilt-edged world of opulence and the rough and tumple world outside the city. Donald Holder’s effective lighting design punctuates the action and helps to create memorable tableaux throughout the production. The icing on the proverbial cake was the Greek-flavored original score by Michael Bruce, setting the scene for the party-like atmosphere that reminded me of the score of “Zorba the Greek” by  Mikis Theodorakis.

If, like me, you have not spent a lot of time with “Timon of Athens,” Simon Godwin’s production and Kathryn Hunter’s magnificent performance are certainly worth the trip to the Lansburgh. While there is no overt political statement at play in the production, the idea of a fall from great wealth certainly resonated with aspects of our current world.

I say, give “Timon of Athens” a chance to win you over. You won’t be disappointed.

Advisory: Stage haze and fog effects are in use during this production. During the second act, dust from onstage dirt is a factor.