Theatre Review: ‘Much Ado About Nothing’ Streaming from Blackfriars Playhouse 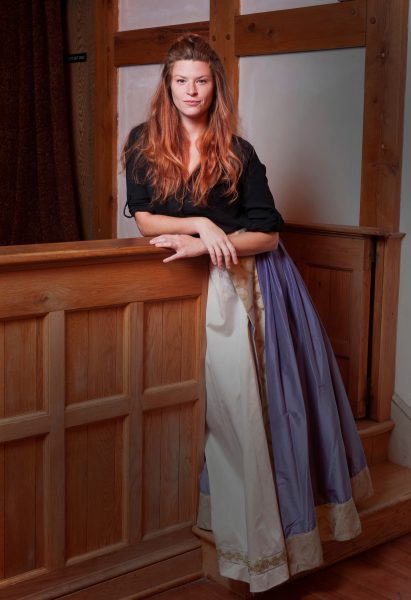 Meg Rodgers as Beatrice in “Much Ado About Nothing” at Blackfriars Playhouse. Photo by Lauren Parker, courtesy of American Shakespeare Center.

At a time when theaters are closed, Blackfriars Playhouse of the American Shakespeare Center in Staunton, Virginia is streaming productions of Shakespeare’s plays. Currently “Much Ado About Nothing ” is being presented and highlights the physical humor, witty dialogue, ominous contrasting plot of Don John’s villainy, and, of course, Shakespeare’s recurring theme of appearances versus reality.

Two Hollywood versions by auteur film directors Kenneth Branagh and Joss Whedon were set in nineteenth-century Italy and our current digital-technology era respectively. The American Shakespeare Center sets its production in yet another era, namely the 1940s. This again illustrates the universality of Shakespearean plays which allows them to be effortlessly adapted to different time periods.

Don Pedro and his comrades-in-arms, Benedick and Claudio, have come back from the war (in the Blackfriars’ change of time period, they seem to be on leave during World War II). While Hero and Claudio have a traditional romantic relationship, Benedick and Beatrice are rivals in magniloquence. Benedick’s most memorable soliloquy is his discussion of his ideal woman’s qualities, failing to notice that his perfect partner, Beatrice, is right before his eyes. Only when prodded do these loquacious rivals warm up to each other as all the while the villainous Don John mischievously is plotting against Hero and Claudio’s upcoming wedding.

Although the Blackfriars production in their Elizabethan-style playhouse is faithful to these plot elements and Shakspeare’s dialogue, this is by no means a traditional production. The 1940s were represented in the costumes – the ladies’ dresses, World War II-era military uniforms, and a character costumed as the famous wartime icon, Rosie the Riveter.

There is a fifteen-minute musical interlude before the show as well as during the intermission. The cast sings and performs musical instruments which adds much entertainment to every visit to Blackfriars. (Other theaters in the Baltimore area such as Chesapeake Shakespeare Company and Baltimore Shakespeare Factory have also adopted this practice.) In this instance, the cast sang and danced to “Bye Bye Blues” – a popular song written in the 1920s but revived in the 40s and 50s. A wonderful opportunity was missed by not including  “Speak Low (When You Speak Love),” closely based on a line in the play’s Masquerade scene, which became the title of a 1943 song composed by Kurt Weill for his Broadway show “One Touch of Venus” (a hit for then-popular big band leader Guy Lombardo). In the musical portions, the cast seemed more at home with folk songs and much later pop hits like Carly Simon’s “You’re So Vain.”

Shakespeare’s theme of appearance verses reality is present throughout the production. Dogberry, the constable, appears foolish and tongue-tied at important moments. As an “outsider” character, he has the advantage of seeing the overall picture, adding depth to his character in an effective portrayal by Benjamin Reed. Jessika D. Williams, who plays Benedick, gives an energetic performance as does counterpart Meg Rodgers as Beatrice.   Ronald Román-Meléndez as Don Pedro was commanding and believable, even performing his lines with a Spanish accent, adding realism to the part.  KP Powell as Claudio incorporated mimicry and gestures, which helps make Shakespeare’s language and the action of the play clear to a modern audience.  Sylvie Davidson, who plays Seacoal in Rosie the Riveter attire, is equally effective as Hero’s attendant Margaret, lending the play a definite retro flair under American flags, representing the patriotism during World War II.

Many productions of this Shakespeare comedy display morally upright, uncomplicated characters such as Hero (Constance Swain) in bright stage lights while the villainous Don John makes his appearances in darkness.  Since universal lighting is used at the Blackfriars’ stage and auditorium, it could make this visual contrast challenging. The theatre company nonetheless followed tradition by having Don John (Zoe Speas) enter through a darkened doorway. He appears first in shadows, wearing dark sunglasses and a black jacket.

The initial wedding scene between Hero and Claudio was also very traditional, probably since a wedding is based so much on ceremony and ritual. Those who like Brechtian touches with actors interacting with viewers may prefer unconventional scenes, such as Benedick briefly sitting in the empty chairs where the audience should be, watching the play as an observer. As is usual at Blackfriars, there are not many props, and so physical humor is used to engage the audience.

Blackfriars’ current streaming production of “Much Ado About Nothing” works well, blending both traditional and highly innovative elements. This performance is part of their “Actors Renaissance Season,” in which actors put on a play themselves without a director. The play runs two-and-a-half hours, but nearly a half hour of the performance consists of the cast performing music at the opening and during the intermission.

Digital Marketing and Public Relations Manager Sky Wilson notes that the play streams through “April 19 or when tickets sell out.”