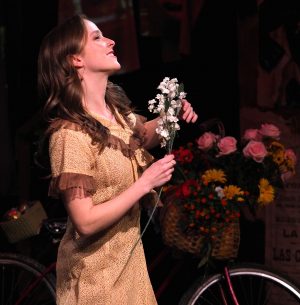 A sunny holiday atmosphere in Italy — or is 1929 Italy really so sunny?  Leah Brzyski as Silvestra.  Photo courtesy of Bel Cantanti.

Bel Cantanti’s world premiere production of “Briscula the Magician” is magical indeed; it combines modernistic, often atonal, operatic music with political observations about the past which may well be applicable to our own era. The story (libretto by Bob Misbin, with score by Frances Pollock) is loosely based on a short story, “Mario and the Magician” (“Mario und der Zauberer”),  by Thomas Mann. An allegorical stand-in for the Italian fascist dictator Benito Mussolini, the titular Briscula (Cipolla of the original tale) uses unsettling charisma and charm to exert his own will and power. The strength of the show is both the music and the company’s phenomenally talented performers – more on that below! – and its ability help us see how decent people – or even ourselves and our children – can be beguiled by this sinister “magic.”

The story focuses on an Austrian family on summer holiday at an Italian seaside town. They “love the wine, the food, the beach, and the sun,” but unfortunately this is 1920’s Italy. Edward Buchleiter, the family patriarch, sees some of Mussolini’s Black Shirts bullying a woman and her small child and is about to return home with his family. He is convinced to stay, however, by the local Michele, who tells him that an exciting magic show is about to happen. Silvestra, another local, sings: “The famous sorcerer…is coming all the way from Rome . . . “  Later Michele voices:  “He  makes you see what is not there!”

... is as universal as it is ever timely.

Will these qualities seduce even the visiting foreigners as the magician comes to town at first in disguise, then dramatically twirling his cape and waving his magician’s hat?  The answer to this question may not have been obvious in 1929, but from our historical perspective, we look back with horror on the fascism which befell author Thomas Mann’s homeland of Germany, as well as the character Edward’s native Austria.

Edward Buchleiter is portrayed with power and conviction by bass Christian Isaiah Simmons; he splendidly conveys, in both word and voice, the conflict between his own human decency and the mesmerizing combination of a professional magician, social pressure, and the Italianate beauty on the surface of things. The charismatic Peter Burroughs, on the other hand, is completely beguiling as the magician Briscula. Burroughs, aided by brilliant costuming and stage work, shows how the seemingly harmless tools of stage magic and showmanship can be harnessed for evil purposes.  Leah Brzyski and Matthew Lulofs, who play the aforementioned Italian seaside locals Silvestra and Michele, are also standout performers, displaying stunning vocal range with emotionally resonant portrayals of everyday citizens who have been convinced to support schemes ranging from questionable to nefarious.

The music is a decidedly modern mélange — “serious music” in an atonal vein, but also with an occasional syncopated rhythm, reflecting the Jazz Age during which the story takes place. The sets themselves are attractive – an Italian café on the left and a Morris column (large cylindrical sidewalk billboard with posters and advertisements) on the right.  The Morris column, the slide projections, and the lyrics mix  references to classical Italian culture with images and headlines germane to Mussolini and his era. However, the brilliance of the stage design and stage direction (by Ksenia Litvak and Jennifer Blades, respectively) becomes fully apparent as the show progresses, for the entire mood can shift from cheer to menace and back with only a few subtle shifts in light and gesture.

Bel Cantanti is led by Dr. Katerina Souvorova, who has worked at several prominent local university music schools. One of the most distinctive characteristics of Bel Cantanti is that the company performs opera outside of traditional opera houses, re-imagining the performances in the more intimate settings of small theatres or churches. Rather than using a large symphony orchestra, live music is provided by an ensemble of seven or eight musicians, conducted  and accompanied on keyboard by Dr. Souvorova herself.  Operatic music is sung by talented up-and-coming opera singers performing in exquisite costumes but with minimalist scenery and props.

While often performing operas from the classical repertoire as well as Romantic-era operas from her native Russia, Dr. Souvorova introduces us this time to a world premiere of an opera in a decidedly modern style. Indeed, this operatic version of “Mario and the Magician” is far more accessible than the short story upon which it is based, given Thomas Mann’s penchant for extreme detail; the themes explored are also explored in a way which is less time-bound than Mann’s original story, written as it was in 1929.

The Bel Cantanti Opera world premiere production of “Briscula the Magician” is to be recommended on a variety of points.  The Bel Cantanti singers are in top form, and the work itself is uniquely modernistic, perhaps even Brechtian, as Black Shirts sit amongst the audience and then walk onto the stage. Musically, the work has elements which are both different from and similar to classical opera. This work is also a rare accessible entry point to Thomas Mann, one of the most influential men of letters of the twentieth century. Finally, the work’s warning of would-be dictators and despots who use showmanship to gain public confidence and eventually all-consuming power is as universal as it is ever timely.

Running Time: two 45-minute acts with a brief intermission between them.

“Briscula the Magician” is performed at the Randolph Road Theatre at 4010 Randolph Road, Silver Spring, Maryland.    The show closes on March 15.