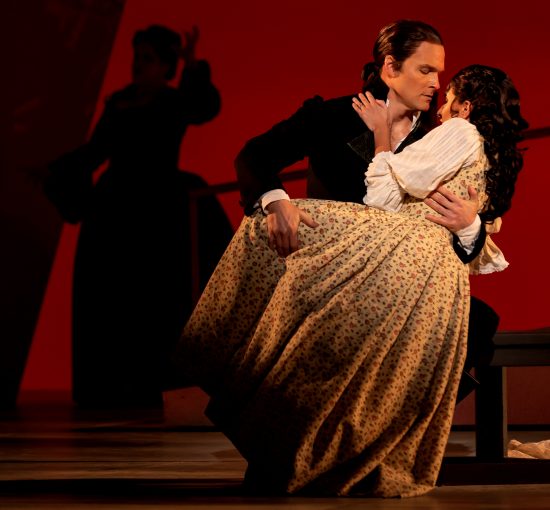 The anti-hero has a long literary lineage. In the ancient Greek epic tradition of Homer’s “Iliad,” the warrior Achilles is plainly viewed as a flawed character — a character urged on at times by pettiness, at times by undignified, destructive anger. Yet despite this,  Achilles is admirable for his persistence and heroism despite his flaws.  Wolfgang Amadeus Mozart’s opportunity to present the anti-hero is in the character of “Don Giovanni” in his opera of the same name: Don Giovanni’s excessive pride leads him to his infernal gloom.  Yet throughout, he also exhibits charisma and charm, bravery and bravado.  This is exceptionally pronounced in the current production of “Don Giovanni” by the Washington National Opera at the Kennedy Center for the Performing Arts, with a tour de force performance by bass-baritone Ryan McKinny as the Don Juan figure.

Don Giovanni, who by some accounts has made some 2065 romantic conquests, seduces Donna Anna, runs her father through with a sword in a duel, and wins enemies everywhere with his haughty attitude — and this is just the beginning of the opera!  Yet, though clearly villainous, Don Giovanni has something heroic and defiant about him as he refuses to give into shame or accept repentance, even at the point of being sent to hell.

Other than Mr. McKinny’s soaring voice and excellent portrayal of Don Giovanni in gesture and facial expression, this is a memorable production because of the unusual staging.  It is a pleasing juxtaposition between classical and modern visuals, with Mozart’s melodious music as the glue which seamlessly holds all together.  On the one hand, there are chandeliers and characters dressed in eighteenth- and nineteenth-century costumes, designed for the characters by  Jean-Pierre Ponnelle. On the other hand, the set is minimalist, with slanting ceiling and left sidewall.

One of the advantages of this production mixing a modernistic staging with traditional costumes is it appeals to two audiences:  the audience which has already seen “Don Giovanni” many times might appreciate this new look; the audience who is new to the opera may find it easier to follow with the traditional elements such as historic costumes and the elegant chandelier.

As the bare modern set on a large stage is ambiguous and somewhat spartan, it might render audience members be more inclined to pay close attention to the English translation of the Italian libretto, projected high above the stage, to the benefit of understanding the intricacies of the plot more clearly. The minimalist modernistic set allows for a concentration of the expert singing more than the spectacle of a very elaborate stage with beautiful props suggesting a romanticized period in the past.

One especially effective scene involves a scaffold-like set. Dressed in pure white color dresses and gowns, women start to appear behind and to the side of the Don, illustrating visually that his life is dominated by seducing many women.  A more realistic or detailed setting might have been less effective at emphasizing Don Giovanni’s focus in life as he boasts about his skill to make love to women.

More, of course, should  be said of the music and the singing.  Evan Rogister conducted the Washington National Opera Orchestra superbly.  Soprano Vanessa Vasquez is in excellent voice as Donna Anna, especially in duet withtenor  Alek Sharder as  Don Ottavio.  Mr. Shrader gives a very moving rendition of Ottavio’s “Il mio Tesoro,” in which he vows to avenge the wrong done by Don Giovanni to Donna Anna. Bass Peter Volpe is in wonderful voice and form as the Commendatore in dramatic flourish delivering the final great moment of the opera, the part shown at length in the Oscar-winning film “Amadeus.”  Although the stage glows in hell-like red light-coloring by WNO light designer Robert Wierzel, this musical moment recalled the film so vividly that it might have been nice to see less-minimalist and rather over-the-top visuals of walls crumbling, demons flying from atop the stage, and live torches swinging wildly, as in the “Amadeus” movie scene.

This unique production of “Don Giovanni,” blending a traditional look and modern production features, is directed thoughtfully by E. Loren Meeker and runs through March 22, 2020.