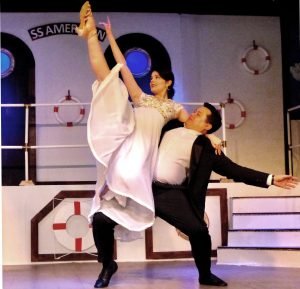 “Anything Goes,” courtesy of the Good Shepherds Players.

The Cole Porter musical “Anything Goes” was to have run two weekends in March at Good Shepherds Players, part of the annual tradition at the Church of the Good Shepherd in Burke, Fairfax County, Virginia, of presenting famous musicals!  Yet “times have changed,” to quote the title song’s lyrics, as “the world has gone mad today.”  Like so much in our region, performances of “Anything Goes” have been canceled, though the current plan is to leave open the possibility of presenting “Anything Goes” later this spring or early summer, events permitting.

We join this hope that “Anything Goes” might still set sail in Fairfax County later this season!

“Anything Goes” is a mad-cap musical onboard a ship, in which Wall Street broker Billy Crocker finds himself on a New York-to-London transatlantic voyage without ticket, in order to pursue his recent love interest Hope Harcourt (Star Spann, who also helped with the retro ship-deck set design in the production).  He is assisted in this regard by his past acquaintance stage star Reno Sweeney (Melissa Pieja) as well as gangster Moonface Martin (Chris Dockins).  The plot of “Anything Goes,” of course, is secondary to the wonderful music.  In addition to the title song, “I Get a Kick out of You,” “You’re the Top,” “Easy to Love,” and “It’s Delovely” (title of the Cole Porter biopic) have become standards and taken on a life of their own well beyond the show.  This is also the Porter show which features “Blow, Gabriel, Blow,” a song which allows us to see biblical associations and is surely a natural for the Church of the Good Shepherd.

It is, of course, highly unusual for a church to contribute to the local art scene by putting on an annual Broadway-style musical.  Explains Steve McBride:  “Good Shepherd Players has been a part of the music ministry at Good Shepherd for over 30 years.”  During this time, they produced such classic musicals as “The Sound of Music” (2014), “Oliver!” (2015), “Oklahoma!” (2016), “The Music Man” (2017), “Joseph and the Amazing Technicolor Dreamcoat” (2018), and “Bye Bye Birdie” (2019), all of which were directed by Nancy Lavallee.  This year she was the producer of “Anything Goes” and shares this experience with the show:  “This show had some of the best dancing I’ve seen in a community theatre show. The choreographers did an amazing job! We’re all doing our part to slow the spread of the Coronavirus, but it is so disappointing not to be able to put this show on for an audience. But everyone banded together to go out on a high note with one last dress rehearsal. Afterwards we had pizza together and shared stories and memories. It’s like the song says from “Annie Get Your Gun:” “There’s no people like show people. They smile when they’re low.”  Mr. McBride concurs:  “’Anything Goes’ presented a huge challenge with choreography and the question of ‘could our dancers do it.’”  The answer, he tells us, is a resounding “Yes:”  “They rose to the challenge and exceeded our expectations beautifully.”

An unusual presence at Good Shepherds Players is Dr. Gregory LaNave.  A Catholic theologian, he is  Ordinary Professor of Systematic Theology of the Pontifical Faculty of the Immaculate Conception at the Dominican House of Studies in Washington, D.C.  Yet he always knew he could sing and wanted to do theatre!  He is a baritone in the Sailor quartet and dance ensemble in “Anything Goes,” but his real role is in community outreach for Good Shepherds Players.

When I asked how shows were chosen, he responded:  “Given the nature of the group—as church-based and intergenerational—we have a predilection for shows with large casts that will appeal to families.”  There are actually several versions of “Anything Goes:”   The original 1934 version, along with revival versions from 1962, 1987, 2002, and 2011.  The 1987 version was chosen for the March 2020 Good Shepherds Players production, perhaps with community and family appeal in mind.  These performances have become so popular in the community that, according to Dr. LaNave, “it is worth noting that this year will see an expansion of the GSP season to encompass two shows: one in the fall, with a smaller cast and probably a smaller orchestra; and the usual one in the spring, which will be much in the vein of recent shows.  The inaugural fall show will be ‘Company.’”

Dr. LaNave encourages us that Good Shepherds Players “have not given up on the possibility of still putting on “Anything Goes” later this spring or early summer, if the current crisis passes.  All of us fervently wish it; it was devastating to put all that work into the show—particularly, but not exclusively, the dancing—and to be cancelled just before opening night.”  We join this hope that “Anything Goes” might still set sail in Fairfax County later this season!

The Church of the Good Shepherd, where “Anything Goes” and other musical productions are performed, is located at 9350 Braddock Road, Burke, Virginia  22015-1521.