Theatre Review: ‘Moonlight and Magnolias’ at Little Theatre of Alexandria 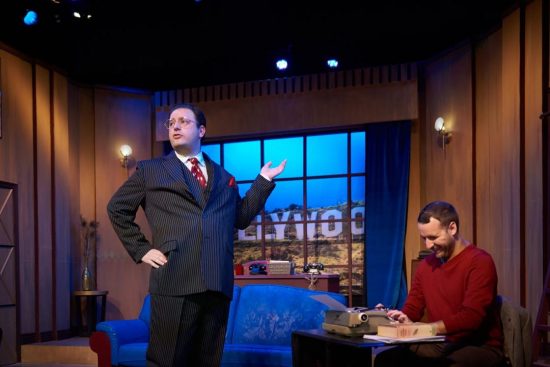 It’s a wonder any film gets done in Hollywood, based on the conflicts and troubles on display in the hilarious and inventive comedy “Moonlight and Magnolias.” Centering on the ups and considerable downs which took place during the early days filming “Gone with the Wind,” “Moonlight and Magnolias” speculates on what happened when producer David O. Selznick gambled everything in a desperate ploy to save what is now a film classic. For a short time, all signs pointed to the Technicolor, Civil War melodrama to becoming the biggest turkey Hollywood had ever seen.

It’s always a windfall when a local theatre unearths a lesser known script and it turns out to be a gem, which Little Theatre of Alexandria has in this show. Published in 2005, playwright Ron Hutchinson took a good number of the facts surrounding the creation of “Gone with the Wind” (GWTW) and threw in his own imaginative, comedic situations to craft a tightly constructed, zany adventure in filmmaking. Director Juli Tarabeck Blacker keeps the pace brisk and the chaos just on the verge of breaking down, allowing her small cast to mine the verbal and visual gags to the hilt.

Leading the ensemble cast as the maverick film producer who has much to prove if GWTW succeeds is Griffin Voltmann. Voltmann captures the passion and drive of the studio executive who must answer to his father-in-law, MGM Studio head Louis B. Mayer. When we join the action, Selznick faces seemingly insurmountable odds against making the film version of Margaret Mitchell’s popular bestseller. The producer fired original director George Cukor and the screenplay is a piece of trash. Selznick risks a huge gambit to try to save the motion picture: call in reinforcements and force them to mold the 1,037 page novel into a workable screenplay. And do it all in five days so shooting can begin the following Monday morning!

Selznick summons two other Tinseltown legends as his miracle workers. He brings in former Chicago newspaperman turned playwright and script doctor Ben Hecht to take on the screenplay. Selznick discovers that in spite of the novel’s nearly universal popularity, Hecht has never read it. The producer also brings in Victor Fleming, who is still attached as the director of another 1939 movie release, “The Wizard of Oz.” Selznick figures Fleming is the only director man enough to steer the titanic Civil War film into port safely and reassigns Fleming to “Gone with the Wind.” And with that, Selznick locks himself in his office with Hecht and Fleming to make movie magic – or die trying.

As the cynical and edgy Hecht, J.T. Spivey has an easy way with a punchline. His Hecht is the intellectual and sharp-tongued scribe who keeps reminding Selznick that movies about the Civil War never made a dime. Providing stark contrast to Hecht, Michael J. Fisher is a world-weary and no-nonsense Fleming – a former chauffeur turned movie director.

The trio of actors are well cast individually but work beautifully together as the high stakes work session gets under way. Voltmann’s Selznick uses every trick in the book to get Spivey’s Hecht to keep typing the script. Fisher and Voltmann embrace the absurdity of two grown men acting out GWTW characters as Fleming and Selznick work to inspire Hecht to write and give him a running summary of the massive novel. Voltmann makes for a memorable Scarlet O’Hara while Fisher matches him as the effete Ashley Wilkes and the young servant Prissy. Spivey, as Hecht, looks on in horror and amusement.

The clever script incorporates sections of slapstick and moments of deeper discussion, such as the treatment of the African-American slave characters and the plight of Jews as both a reviled minority and the kings of Hollywood, especially since all the major film studios at that time were owned and run by Jews. These discussions are treated with dignity and within the context of the late -1930s era. Director Juli Tarabek Blacker never allows the heady chats to overshadow the comedic thrust of the play and she has her actors maintain a frantic energy in which there is never a dull moment.

The actors are period perfect in costumes designed by Ceci Albert and Mary Wallace. The detailed set design by Stacey Becker and Ken Brown provides Selznick with an impressive office with the famous Hollywood sign peeking through his bay window.

I must admit I have always been a TCM-loving, classic movie buff. And I am a sponge when it comes to Hollywood lore and behind-the-scenes stories. “Moonlight and Magnolias” ticks all of these boxes. I found it to be a fascinating and entertaining diversion set in the mythical world of Tinseltown performed by a small but gifted cast of performers. Scarlett O’Hara famously declared, “Tomorrow is another day.” But right now is the perfect time to get tickets for this lesser known but worthy comedy set in Hollywood’s Golden Age.

Advisory: Peanuts are consumed onstage during the production. There is also mild adult language.