Audio Review: ‘Poe Theatre on the Air’ at NPR

A new radio horror series has developed based on the works of the Romantic Era writer Edgar Allan Poe.  Appropriately enough, the show is produced and recorded in Baltimore, which was home to Poe during some of his most productive years.  To give the series further local color, “Poe Theatre on the Air” (as the podcast series is billed), is distributed through Baltimore’s NPR affiliate WYPR and sponsored by Baltimore-based Raven Beer (named for Poe’s most famous poem, “The Raven”).

We hope these audio productions continue far into the future…

The series, acted out superbly by Alex Zavistovich, Brian McDonald, Vince Wilson, and their fellow performers of  the National Edgar Allan Poe Theatre, produces twenty- to thirty-minute long dramatic adaptations of classic Poe stories such as “The Cask of Amontillado,” “The Black Cat,” and “The Tell-Tale Heart,” while also including more obscure Poe stories such as “A Predicament.” Yet the series is not merely an anthology of Poe’s literary output.  There is instead an unusual frame device suggested by Poe’s tale “ The System of Doctor Tarr and Professor Fether,” in which an insane asylum is run by Dr. Maillard, who is affable if a bit eccentric as he designs his “system of soothing” to treat the institution’s patients.  Each cell contains a narrator from Poe’s many first-person tales, and Dr. Maillard invites the “guest” (the listener to the series) to visit one cell per episode and have the occupant tell his or her tale.  Dr. Maillard serves as a sort of series host, much like in horror runs past, ranging from Raymond in “Inner Sanctum” to the “Cryptkeeper” in “Tales from the Crypt.”  Like these hosts of horror series of old, Dr. Maillard injects his story introductions with banter and a bit of gallows humor. 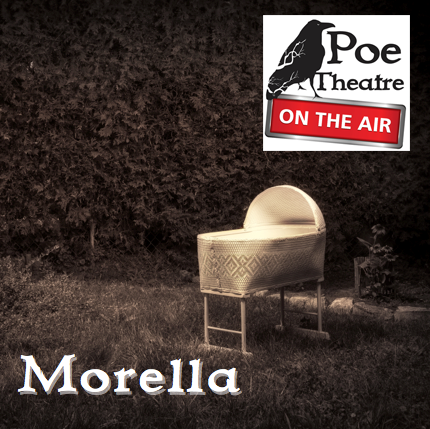 In “Morella” as well as other Edgar Allan Poe tales dramatized by “Poe Theatre on the Air,” the new radio horror series produces loyal yet innovative versions of the Baltimore-based writer’s works. Courtesy photo.

The episodes are well-acted and contain sides of Poe which are not always remembered.  “A Predicament” is a comedy, for example, and “A Descent into the Maelström” is an expression of Poe’s Romanticism in an adventure tale reminiscent of Coleridge’s “The Rime of the Ancient Mariner.”  Here the narrator sails to the North Pole, where he finds at the edge of the earth a colossal whirlpool or maelström as “the boat did . . .   skim like an air-bubble upon the surface of the surge,” quoting from the original story.  Impressive sound effects and music are used in this episode and throughout the entire series.  Poe as a poet is also represented at the closing of each broadcast as the narrator intones from one of Poe’s verses:  “All that we see or seem is but a dream within a dream.”

Perhaps the series’ greatest virtue is its loyalty to Poe’s stories, as many adaptations of Poe’s “Tales of Mystery and the Imagination” in popular media deviate widely from the source material.  Most famously, the Roger Corman cult films of the 1960’s starring Vincent Price often enhance the gothic horror element to an “over-the-top” degree.  The filmed Corman Poe anthology  Tales of Terror is a case in point, with a version of “Morella” featuring resurrected corpses, conflagrations, and other histrionics not in the original tale.   In fact, “Morella” is about a woman far the intellectual superior of her husband.  “I abandoned myself implicitly to the guidance of my wife,” says Poe’s narrator, “and entered with an unflinching heart into the intricacies of her studies . . . poring over forbidden pages . . .  from the ashes of a dead philosophy some low, singular words, whose strange meaning burned themselves in upon my memory.”  At the same time, the narrator is repulsed by his wife.  Dying, she says to him:  “The days have never been when thou couldst love me—but her whom in life thou didst abhor, in death thou shalt adore,” and this occurs when the dying woman’s daughter seems to be changing into a new Morella.

Poe’s literary language, as we have seen in quotes from his pen above, is arcane and archaic.  A strong point of the new podcast series is that, while the series is often loyal to Poe’s original vocabulary so as to keep the mood of his stories (Poe felt the sound and meaning of language were irrevocably linked), it also updates some vocabulary so that the stories come across as more natural to the modern listener.  In “The Facts in the Case of M. Valdemar,” for instance, the term “Mesmerism” from the original story is used, but the host explains in a natural manner that this is a synonym for the more commonly used word “hypnotism.”

Many more examples could be given as to how film director Corman alters the Poe texts, but we will mention only one further example:  the seamless though utter disloyal melding of the Poe tales “The Cask of Amontillado” and “The Black Cat” in Tales of Terror.  Though both narratives sport the idea of burial behind walls as a common theme, “Poe Theatre on the Air” reminds us of how different the tales really are:  “The Cask” is a story of revenge taken upon a spoiled nobleman (one of Poe’s “Anti-Aristocratic Tales,” as one Poe book anthology has it).  “The Black Cat,” on the other hand, is an account of a man’s descent into alcoholism and rage.  We do hope Dr. Maillard’s soothing cure will work on this lost individual!

Loose, misleading adaptations of Poe’s stories are hardly limited to the films of Roger Corman.  Witness, for instance, one of Poe’s rarer tales, “Berenice.”  A 1970’ radio version of “Berenice” by “The CBS Radio Mystery Theater” (also broadcast over National Public Radio in the early 2000s) presents this already gothic piece as a ghost story of the “vile, vicious, and clever” woman “Berenice” (“a shrew, a wildcat!”) whose smile and destructive power haunt her husband, “pursuing him, haunting him in death as she did in life.”  The Berenice character of the original tale presented by “Poe Theatre on the Air,” however, is a woman of charm and great beauty who eventually succumbs to epilepsy and other maladies.  The narrator, meanwhile, is not an innocent husband but a man with an idée fixe, a monomania, about Berenice’s teeth.  For the effect of radio, there is a harrowing scene at the close of the “Poe Theatre on the Air” production which is loyal to but not depicted explicitly in the tale itself.

We recommend these dramatizations of Poe’s tales, which will appeal to admirers of Poe as one of the masters of American literature . . . but also will find interested listeners in fans of horror series like “Tales from the Crypt!”  We hope these audio productions continue far into the future and that they further dramatize some of Poe’s rarer works, such as his abandoned play “Politian,” his unfinished story “The Lighthouse,” and “The Thousand-and-second Tale of Scheherazade!”