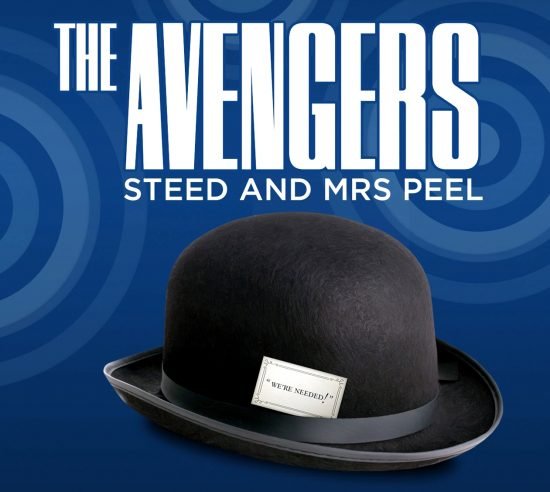 “Mrs. Peel, we’re needed:”  the spy series “The Avengers” is back in a dramatic way.  Photo courtesy of Big Finish Productions.

“The Avengers” was a campy English 1960’s television spy series and is still remembered fondly today. While the show clearly placed itself within the James Bond 007 spy-thriller genre, “The Avengers” included much tongue-in-cheek humor and occasional sci-fi-style plots of cybernauts, time travel, invisibility formulae, and deadly Venus rays (sent out, of course, by the nefarious British Venusian Society).  John Steed represented the traditional English gentleman with “charm, umbrella, and bowler hat,” as the German translation of the series called it.

When not spying, Steed’s “afternoons would be spent in the pursuit of either culture or young ladies — or, preferably, cultured young ladies,” we read in “The Avengers” novel Too Many Targets by John Peel and Dave Rogers.   In addition to resembling ladies-man Bond, he was a spy with Bond-like gimmicks: unusual cars, an umbrella which could be wielded as a sword, and gadgets such as steel in his bowler hat to knock out his unwary opponents.

Whereas Bond often sought romance with a seemingly infinite number of members of the opposite sex, Steed was a more steady leading man, working with (and sometimes flirting with) three attractive and highly competent female spy assistants: Cathy Gale, Tara King, and most famously Emma Peel. While the James Bond movies occasionally ventured into absurdity and science-fiction elements, “The Avengers” came to embrace this approach full throttle, accompanied by class and champagne and pet phrases such as “Mrs. Peel, we’re needed.”  The series has been brought back recently in audio form by UK-based Big Finish productions.

A great value of the new audio series is it highlights the theatrical and often illusion-centric nature of the stories. “It’s a Wild Wild Wild Wild West,” for instance, finds John Steed and Tara King in a cinema, eating popcorn as they await the feature show.  This is a for-audio illusion, however, as this turns out to be a meeting through screen projection with Mother – their male boss and spy chief, equivalent to M in the James Bond film franchise.  Later, Steed and Miss King enter a “Westworld”-style holiday town called the Lazy J Ranch. Here Tara dresses as the historical sharp-shooter Annie Oakley (famous in the musical “Annie Get Your Gun”), with Steed, ever the dapper English gentleman, remaining out-of-place in posh suit, tie, and bowler. (“True class is timeless,” he notes!)  A Western-style “High Noon”-style shootout occurs, yet this again turns out to be a ruse between actors.  “If we find out their secret plans,” says Steed, “all their play-acting days will be over!”    “This isn’t part of the show!” exclaims Tara, as the Old West comes to Britain – or is it instead an enemy spy ring?

Theatre, both literally and figuratively, is featured in the episode “Now You Don’t.”  Here a strange gift leads Steed and Miss King to spend a night in a theatre, where they meet magicians, wizards, and (with a nod to Homer) a witch called Circe. “Steed finds things get tricky, Tara takes the stage,” announces the teaser in this highly enjoyable episode.

In yet another adventure, “The Norse Code,” featuring Steed’s assistant Emma Peel, the Vikings have returned to East Anglia!  This gives occasion for opera and theatre musical references, allowing the series to fully bask in the quirky humor for which it is famous. We learn, for instance, that an atomic bomb has been stolen by a spectral Viking longship, with bits of Wagner’s “The Ride of the Valkyries” from the opera “Die Walküre” appearing as background music — enhanced by spoken lines such as “Bring the torches, Brünnhilde!” and “By the beard of Odin!”

In another memorable theatre allusion, Steed and Mrs. Peel are on a motorized boat which runs out of gas – an act of sabotage.  “Have we got trouble!” reacts Steed.  Emma then riffs off of “Professor” Harold Hill in Meredith Wilson’s “The Music Man:”  “Trouble right here in River City with a capital T and that rhymes with P and that stands for petrol!”

While the episodes with Steed and partners Emma and Tara are all dramatizations based on the comic strip tie-in to the television show, Big Finish also has a related audio series based on the first television season, a more traditional early 1960’s mystery series in which Steed is the junior partner to Dr. David Keel.  The rationale for recreating these episodes is that all but three shows from this early series have been lost during an era when videotape was commonly recorded over for other shows.

While possessing less of the quirky charm which made the later “Avengers” so memorable, this earlier version contains theatrical elements which foreshadow the later series. One episode, for example, entitled “The Girl on the Trapeze,” has Keel witness an apparent suicide. However, it turns out that the trapeze artist, clown, and other performers are concealing something even more sinister behind the scenes in their circus!

This audio entertainment is welcome news in the current absence of live theatre entertainment during the current coronavirus pandemic.  The actors are superb, especially Julian Wadham as John Steed, sounding very much like Patrick Macnee (who created the television role) in timbre, accent, and intonation.  Olivia Poulet as Emma Peel and Emily Woodward as Tara King are excellent in the roles once enacted by Diana Rigg and Linda Thorson; they sound less like the original television actresses, but succeed admirably in making the parts their own.  Everywhere there is the sparkling witty dialogue and characterization, rendering the elaborate and bizarre plots somehow more believable.  The sound effects and iconic “Avengers” theme music are presented in stunning stereophonic high fidelity, and the stories with their “over-the-top” elements are relatively easy to follow.

We recommend these audio adventures enthusiastically, both as a nostalgic return to the spy series of the 1960’s for old fans and also as an excellent introduction for newer fans of “The Avengers.” Theatre aficionados will enjoy references to American musical theatre, Wagnerian opera, circuses, and magicians in these entertaining spy escapades. Information on these Big Finish productions, with more releases upcoming in June 2020 and June 2021, may be found here.