Audio Review: ‘The Raven’ by the Poe Theatre on the Air, Streaming on NPR 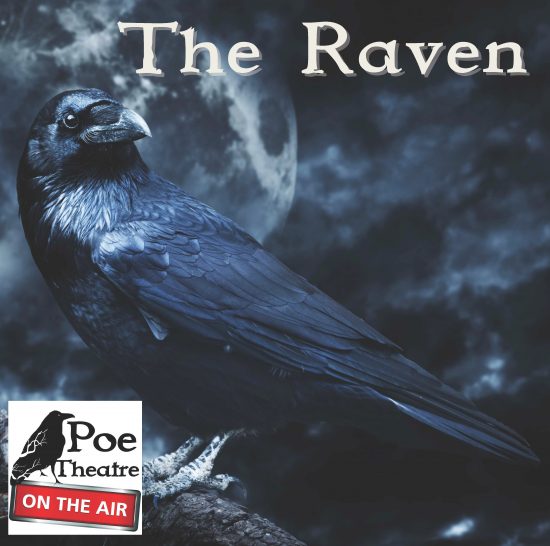 “What clang was that, and doleful song,/ And rush of raven’s wing?”
— Gottfried August Bürger,  “Lenore”

How does one continue an up-and-coming dramatic radio series in the era of quarantine, self-isolation, and social distancing?  With its latest installment entitled “The Raven,” the National Edgar Allan Poe Theatre shows the way!  The Theatre has created Poe Theatre on the Air, now available for streaming from National Public Radio (NPR). Alex Zavistovich is the creator of the series which airs over Baltimore’s WYPR and is sponsored by — appropriately for this episode! — Raven Beer.  Mr. Zavistovich himself provides the voices of announcer, horror show host, poetic narrator, and the Raven itself with its mantra of “Nevermore.”

The production presents Poe’s celebrated poem “The Raven” with a bit of charming irreverence.  The Raven’s narrator is portrayed as an inmate of an insane asylum who is recounting the events of the poem for the asylum director, one Dr. Maillard. This “wretched soul” begins telling the story of his encounter with what Dr. Maillard calls his “avian adversary” by reciting the famous opening to the poem:  “Once upon a midnight dreary, while I pondered, weak and weary,/ Over many a quaint and curious volume of forgotten lore—” The “patient” is at once  interrupted by Dr. Mallard, who says:  “Poetry has its place, dear chap, but in your case, it might be more of a distancing mechanism! You need to speak plainly.”

From there, the action follows the poem, though with the narrator articulating his internal monologue using more of the conventions of spoken language. The production contains great wit as well, balancing the seeming heaviness of the poem with humorous asides, as when the Raven first enters the narrator’s chambers. “Now I’ll have to have the place cleaned!” grumbles the narrator, peevishly concerned of bird droppings. Yet Poe’s wonderful alliteration remains — the Raven, for example, is described as “grim, ghastly, and gaunt” – and occasional rhymes of “Lenore” and “Nevermore!” are present. Even better, much of the rhythm of Poe’s poem is kept, the last feat certainly an impressive one in this new audio drama format.

Mr. Zavistovich succeeds admirably in playing all of these roles, under the superb direction of Jennifer Restak, who also lends her acting talent to other episodes in the larger Poe Theatre on the Air series. Mr. Zavistovich tells us that “It’s been a challenge in this period of isolation to maintain our high production values without access to a professional studio. I had to do the recording in the most sound-proof and acoustically neutral space in my house—my bedroom closet!” One would never know about the technical improvisation, given the excellent quality of the sound, augmented with impressive sound effects, echoes, and orchestral phrases reminiscent of Tchaikovsky as well as Hitchcock film scores.

An additional challenge to dramatizing “The Raven,” of course, is that it is not a story at all, but rather a narrative poem.  Poe was actually a reader of German literature: “The Raven” seems based on Ludwig Tieck’s “Phantasus,” in which a man is sitting up late at night reading a book and affected by flights of fancy, and Gottfried August Bürger’s  “Lenore,” in which a somber raven in association with the death of a  beautiful girl called “Lenore” amidst ghosts and rumors of ghosts.  In Poe’s version, the narrator is a man alone and immersed in books and haunted by memories, especially those of his lost love Lenore.  The Poe Theatre on the Air series, as mentioned above, broadens the view to include Dr. Maillard as well as his guest, the radio listener. It also places “The Raven” within the Poe Theatre on the Air’s ongoing series in which the various patients of Dr. Maillard serve as entry points for dramatizations of other of Poe’s Tales of Mystery and the Imagination.

I heartily recommend this unique and wonderful dramatization of Poe’s “The Raven,” one of the best-known poems in American literature.