Audio Review: ‘The Rise of King Asilas’ Streaming via Podcast 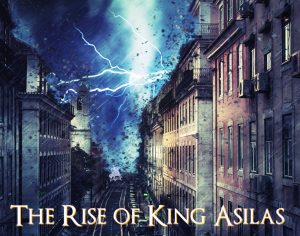 “The Rise of King Asilas” is a fascinating, thought-provoking, audio series currently in its third season. The brainchild of JV Torres, who writes and stars as King Asilas, the show received a Latin Podcast Award in the category of “Performing Arts” and is nominated again in the “Drama” category for 2020.

Mr. Torres got interested in creating his own full-cast audio series replete with extended music and sound design via an unusual source – linguistics.

“I studied linguistics at Notre Dame of Maryland University. Linguistics is how I got into podcasting in the first place.” Mr. Torres was comparing the dialogue and accents used in old-time radio detective shows and comparing these to features he heard in modern audio drama. He then decided to produce his own modern audio drama series, and the rest is history.  Or, perhaps more appropriately to his “King Asilas” series, alternate history!

“The Rise of King Asilas” starts off from a recognizable vantage point – the current divide in American society between conservatives and progressives. According to the plot of this series, this division leads to extreme factionalism and a variety of localized independent movements.  Enter the U.S. General Asilas Roman, who invites these leaders to a conference where he has them and many of their followers assassinated.  The United States is then abolished, and “The New Kingdom of America” is begun, with Asilas as absolute monarch. The series proceeds as this everyman-dictator deals with personal relationships (his wife Queen Rebecca and a love interest), foreign policies (future negotiations with King George, whom we assume to be the son of the real-life Duke and Duchess of Cambridge), and “night terrors” (doubtless a human reaction to the draconian measures Asilas has enacted).

Set 40 or 50 years in the future, the series is a modern dystopia with suggestions of works in the genre such as “Brave New World,” Mr. Torres comments that a major reference point is the Book of Revelation, for he states that “nothing is more utopian or dystopian than the Bible.”  Indeed, there are biblical markers throughout the series, such as an appearance to King Asilas by the Angel Gabriel, who presents Asilas with a sort of Rosetta Stone which the king orders to be translated.

Yet “The Rise of King Asilas” is not merely science fiction due to its dystopian features, but also because of such elements as conspiracies of monsters and meetings with extraterrestrials (alien “close encounters” is a motif especially in season 2). By season 3, King Asilas turns his focus to religion, as he becomes more devout, and the Catholic Church and the Pope become a serious focus of the series. “Because we have thought of God and have the idea of God,” King Asilas has already noted to his doubting protégé Abigail in the first season, “there is a God.” Rare indeed is the adventure audio series which postulates the ontological argument for the existence of God.

There is also a JV Torres novel which bears the same title as the podcast drama. The novel and the audio series complement each other, telling the same story but presenting some different scenes so that each format enriches the other.  The “King Asilas” novel is by no means the only book penned by Mr. Torres, as he works in second-language acquisition and has published a textbook. He intrigued us with the comment that “a textbook I published for English learners connects with strategies I employ in the audio series.” Indeed, the book is referenced in the credits of each episode and funds the production of the series. In the series, Mr. Torres is joined by the vocal talents of both professional and first time actors. Standing out for special mention is Clarence Jackson, who is ardent and complex as President Jackson, the last elected American commander-in-chief whose fate it is to relinquish the United States to the reign of King Asilas. John Doby also turns in a highly effective, low-key performance portraying Quintin  Capone, the ominously named confidant of Asilas who helps the King retain power with Capone-like methods.

For these podcasts, Mr. Torres has teamed up with the Mutual Audio Network. The moniker of this network takes us back to traditional radio broadcasting. Radio listeners may remember the now-defunct Mutual Radio Network, famous for “Mutual Radio Theatre” and the radio version of “The Larry King Show,” which featured Mr. King’s occasional skit contacting extra-terrestrial life on the fictional Planet Fringus. Listeners of audio drama, whether coming from the entry point of older radio theatre or modern podcast audio dramas, should certainly give this unique, reflective series their attention. As Mr. Torres comments, “ I believe we are on the cusp of a digital renaissance in the podcasting world — if we are not there already!”