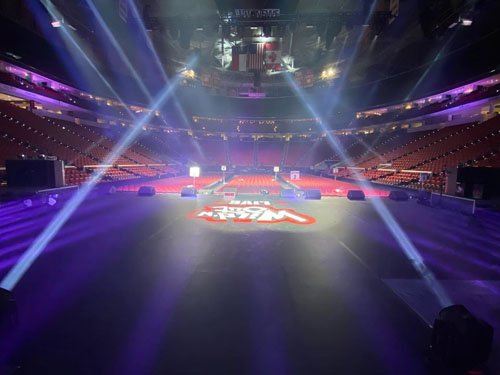 It’s the sound of silence that is haunting bars, clubs, theatres, and live music venues throughout the nation.

When COVID 19 shut down the live music scene in Maryland in mid-March, musicians, sounds companies, and venues have been dealing with unprecedented times. Show and tours are canceled or postponed as the music world has been derailed by Coronavirus, leaving many musicians stranded with no financial back up.

For popular and unique bands like The Reagan Years, the general consensus is that full- time musicians are frustrated. “The regional entertainment industry feels overlooked. Musicians work multiple gigs monthly to generate enough to be self-sustaining. This work has stopped. There is no telecommuting option and no sick leave. This is income that has just evaporated while the industry waits to resume,” says Sy Seyler, co-founder, bandleader, and drummer for The Reagan Years.

Karen Ellison and Sy Seyler started The Reagan Years, an 80s tribute band, back in 1996. As it heads into its 24th year, much of their work is now being pushed into 2021. The band typically performs in excess of 120 shows a year according to Syler. “Many people are using the phrase ‘we are all in the same boat’ but believe me, the tech company yacht full of telecommuters still earning full pay is different from the regional musician’s boat that is sinking in stormy water.”

For the first time in America’s history, independent contractors, the self-employed, and gig workers (which include musicians), were able to apply for unemployment benefits. Maryland launched a one-stop online application website that crashed within ten minutes due to high demand.

As frustrations mount and bank accounts and savings are depleted, what’s next for bands and singers? While many are using social media and live streaming gigs to generate some funds, for many, earning tips to sing is not a long-term solution.

Seyler adds, “As unemployment grows, the people tipping performers may lose that ability as their own finances get impacted. As many performers move to this media, it may even saturate social media and lead to some artists having fewer ‘followers.’”

One group helping musicians is the Annapolis Musicians Fund For Musicians (AMFM), an Annapolis-based non-profit created to provide temporary financial relief to musicians in the area. AMFM is very unique, since there are no membership fees required and it offers help to musicians who have lost gigs.

Matt McConville, president and founder of AMFM says, “Fear, that’s what musicians and venues are feeling right now. We have never faced a situation like this and many people feel that this could be the end of live music as we once knew it.”

McConville, a musician, songwriter, and published author, founded AMFM in 2006. “I was part of a great group of people who helped to get this non-profit up and running and work to create a solid fundraising model. Many of those people are still involved and AMFM wouldn’t have survived without our strong board of directors.”

After establishing singer/songwriter events in Pittsburg, McConville was impressed with the number of musicians who collaborated to help musicians in need in the Annapolis area. “I started performing in the area and I saw a community of musicians who came together to hold benefits and galas to raise funds to help other musicians. This was really the foundation for setting up AMFM, to create a non-profit that could always be in place year-round. Our shows throughout the year help to bring much-needed funds to our organization. It’s a great fundraising model that works.”

“We may be one of the only music-based, non-profits that offers help for musicians who have lost gigs. In a typical week there are four or five applications for help. Right now we have seen those numbers triple. We can typically review all our requests on a single page and take action. Right now we have several pages on a spreadsheet.”

“It was essential to us that we get checks out to help as soon as possible. Firstly, we understand that bills need paying aside from the financial aspect we really want to show musicians that there is help and we are listening to your concerns and needs.”

Venues, booking agents, promoters, and sound companies are among those who are concerned about their futures until a vaccine or remedy is available.

Scott Tydings, the president, and CEO, of Showtime Sound based in Frederick, is no stranger to the ups and downs of show business working with such names as Kevin Hart, Nick Cannon, and IL DIVO, to name but a few. “The future is very uncertain. We have lost in excess of $3 million so far in 2020. There is some help for small businesses but it will only sustain a very small amount of staff wages until June – what happens then?”

Showtime Sound was set up and one hour away from opening the doors to the public at Royal Farms Arena in Baltimore when Governor Hogan announced gatherings of 250 people were immediately prohibited. “The plug was literally pulled, it was just by chance we were close to home in Baltimore as this was part of a multi-city road trip with television personality, rapper, and comedian Nick Cannon on his MTV Wild ‘N Out Livetour. We were due to kick off a new tour in April with Kevin Hart. This was a global tour, and now, all canceled until 2021.”

Established in 1996, Tydings’ says he has never faced such uncertainty. “We have never seen venues shut down like this. We provide sound for corporate events, company galas, college commencements, concerts, and events nationwide. Locally, we do all the shows at the MECU Pavilion and all the production for the Modell Performing Arts Center at the Lyric. We won’t have much to celebrate this July 4th. The Frederick, MD, Leesburg VA, and Baltimore celebrations will not go ahead this year and that is a huge blow for us. Nationally and internationally we have seen tours with Journey, The Pretenders, and IL DIVO canceled as we sit around waiting for our coronavirus numbers to decline so Governor Hogan can set a date to re-open music venues.”

On a normal tour, more than 30 workers are paid weekly even if there are only two or three stops on the tour that week. Tydings has had to let more than half his employees go until venues across the nation are re-opened. “Promoters across the country were holding off in canceling tours, leaving our trucks stranded and loaded with sound and lighting equipment. Today, finally we have trucks heading back to Frederick from Missouri with equipment as promoters have said enough is enough. It seems the show will not go on.”

Music and theatre fans across the globe are looking forward to being able to enjoy live performances as we hope to head back to what once was normal, everyday life.

You can donate to AMFM online.