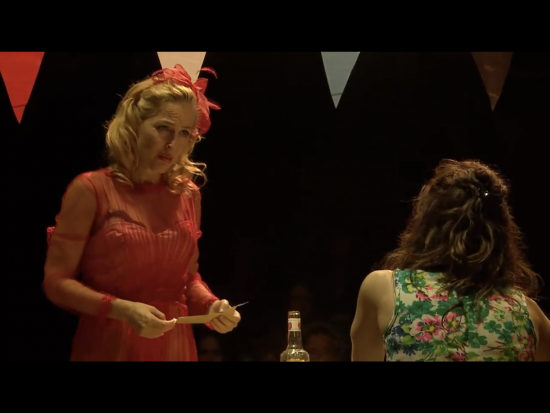 Gillian Anderson (Blanche) with Vanessa Kirby (Stella) in the Young Vic production of ‘A Streetcar Named Desire” streaming on YouTube.

Poetic reverie and brute force clash as never before in Tennessee Williams seminal drama A Streetcar Named Desire, the 1947 play that took Broadway by storm and remains a piece that traffics in dreams and savagery more than 70 years after its premiere.

It’s been a minute since Broadway audiences saw a revival of Streetcar, but Britain was treated to a production directed by Benedict Andrews for The Young Vic, a theatre company based in London, in 2014 featuring Gillian Anderson as the faded southern belle, Blanche Dubois.

My hat is off to the Young Vic for bringing this landmark American play to life once again – it’s time well spent.

Television audiences may know Anderson as Agent Scully in the long-running “X-Files,” as well as more recent appearances in British programs such as “Sex Education,” available on Netflix. The British-American actress has made a name for herself on both sides of the Atlantic and this production of Williams’ most popular work certainly seals her reputation as a first-class performer.

Even though the production ran for a short time in London, this production was preserved on film. The co-production with The Young Vic and producer Joshua Andrews, made an agreement with National Theatre Live, to show the filmed performance in cinemas all over the world. Last week it joined one of the many productions to be streamed for free on YouTube courtesy of the initiative National Theatre at Home. While theaters everywhere remain closed due to the global pandemic, those of us starving for culture can look to the internet to scratch our cultural itch.

For anyone not familiar with Streetcar, the play is set in the French Quarter of New Orleans, where Stanley and Stella Kowalski rent a modest apartment. Working-class Stanley – played by Ben Foster – works hard, goes bowling to relax, and expects his wife Stella – Vanessa Kirby – to be available for any domestic tasks he requires, if you get my drift. Into this steamy atmosphere, Stella’s older sister Blanche – Anderson – enters. Blanche arrives unannounced from the family’s home in Mississippi, Belle Reve, under mysterious circumstances. Blanche tells Stella they have lost Belle Reve; but Blanche herself is really the lost one, as is revealed throughout the play. Blanche seeks a place to call her own, but it will be apparent by the climax of the play, the Kowalski’s apartment is not that place.

What immediately struck me about this production is the radical staging. With an arena-like atmosphere, the playing area is a mere suggestion of a tiny apartment, with a skeletal outline of walls containing minimal furniture, courtesy of scenic designer Magda Willi. As the play unfolds, the entire stage rotates, allowing all audience members to see the action in motion. The staging allows for more immediacy in the intimate venue where the actors are only a few feet from the front row. Shifts of time are represented with loud music and dimly lit transitions during which the actors rapidly change costumes within full view of the audience.

Another innovation is the choice to put the actors in modern dress, giving the play a contemporary look that is sometimes at odds with the text. But the costume design by Victoria Behr does allow for a certain amount of sensuality that is heightened by the tight jeans, low-cut blouses, and other modern touches.

Being a British production, most of the cast has to work very hard to sound like denizens of the Deep South; although their delivery has a touch of theatricality, the performers all sound natural. Anderson, based on other performances, can easily switch from British to an American dialect, and she has the lion’s share of the dialogue in Williams’ script. Ben Foster, playing Stanley, is an American and sounds just like he should.

The visceral performances are a highlight for this production, lead by Foster, Kirby, and Anderson. Foster, in the role that put acting legend Marlon Brando on the map in 1947, is built for Stanley, with his fit and compact frame, and harsh American accent. Displaying the most contrast with Blanche, Foster’s Stanley is less mumbly than Brando, but no less of an alpha male. His relationship with both his wife Stella and her troubled sister is complex. Foster balances the devoted male animal with sheer brute force. As his increasingly pregnant and dutiful wife, Kirby is grounded and effortlessly sensual; the Earth mother to Blanche’s fallen, fairy-queen.

Offering strong support to the leading players is Corey Johnson, as Stanley’s friend Howard Mitchell, aka ‘Mitch.’ Johnson brings authenticity to his performance, being a native of New Orleans. His scene with Anderson’s Blanche reveals the gentle soul floating just below the surface of Williams’ clash between Blanche’s fanciful flights and the harsh realities she resists.

Which brings us to Anderson as the wounded butterfly, Blanche Dubois. Originally played by the delicate Jessica Tandy and made even more famous by Vivienne Leigh in the 1951 film, Blanche is one of the most desirable roles for actresses in the theatre. One part vulnerable flower, another part master manipulator, and always veering on madness, it is a tour-de-force if it is played correctly or a disaster if overdone. From her first moments complaining about the “merciless glare” of bare, electric light bulbs, through her stunning admissions of her transgressions, to the pitiful ending as she heads to an uncertain future, Blanche Dubois packs a lot of living in a nearly three-hour play. From my perspective, Anderson carries Blanche into the 21st Century with all the delicacy of a silk scarf covering an electric lamp. She plays the range of emotion, handles the lucid moments with gentle humor, and the excruciating moments of mania with raw power. The climactic clash between the lost belle and Stanley is difficult to watch, but Anderson and Foster handle the physical action and emotional turmoil like two prize-fighters. Unlike the old movie, however, the colors and intimate staging bring the power of Williams’ story to life as never before.

Purists may balk at the modern touches, but to me the newly minted setting and costumes took nothing away from the presentation, by my estimation. Those same fans of Williams should also know the text of the play has not been, as Stanley says, interfered with.

The beautiful sadness of Blanche’s exit scene is still intact. It is exquisitely rendered by Anderson and the entire Young Vic company, enhanced subtly by Paul Arditti’s creative sound design that puts the action into Miss Dubois’ fractured mind. The final moments still have the power to send chills up the spine or illicit a tear or two. And Blanche’s exit line gets me every time. As the kindly and genteel visitor coaxes Blanche off the floor and out the door of Stella and Stanley’s bathroom, Miss Dubois summons her dignity and refined air once again and looks longingly into the gentleman’s eyes. “Whoever you are – I have always depended on the kindness of strangers.”

Advisory: Adult situations are depicted along with scenes of sexual violence and domestic abuse. The original rating is for ages 15 and above, by UK standards.

A Streetcar Named Desire by Tennessee Williams, a National Theatre Live streaming presentation of the Young Vic production, is available for free on YouTube through Thursday, May 28, 2020. Click here for access.