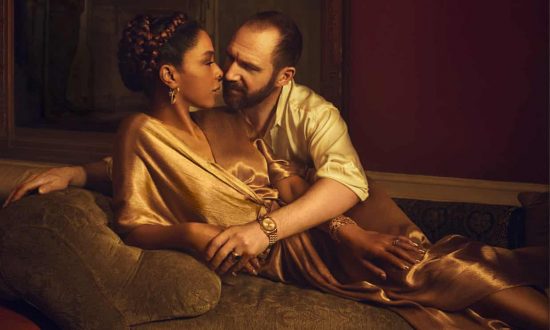 Sophie Okonedo and Ralph Fiennes as Antony and Cleopatra (courtesy of the National Theatre.)

Love, war, and empire are mapped out on a large stage in William Shakespeare’s Antony and Cleopatra. But there is also a rocky and emotional landscape traveled by two very intrepid explorers, namely the award-winning Ralph Fiennes and Sophie Okenado in the title roles.

And without leaving the comfort of our COVID-19 isolated homes, audiences all over the world can point their laptops and tablets to Great Britain’s National Theatre for the next week to witness the grandeur of stagecraft and poetic language as displayed by a memorable National Theatre at Home production.

The tragedy of Antony and Cleopatra is Shakespeare on a grand scale and it is impressive to take in, even if it does not get staged as often as some of the other “Roman Plays” – Julius Caesar and Coriolanus. But it is worth the time, especially thanks to this relatively recent production, seen in London in 2018.

“Antony and Cleopatra is Shakespeare on a grand scale and it is impressive to take in.”

Simon Godwin, Shakespeare Theatre Company’s new artistic director, directed this production in the classical-style Olivier Theatre in the amazing National Theatre complex on the South Bank of the Thames in London. Luckily for the world, the production got the National Theatre Live treatment and in the spirit of keeping “live” theatre thriving, the company is rotating through their filmed productions, sharing them weekly on YouTube.

Antony and Cleopatra is a play of big ideas, big moves, and contains many characters – major and minor. Because it is staged less often than some of the well-known tragedies, I might suggest Utah Shakespeare Festival’s succinct synopsis – found here – before you join the Queen of Egypt and her paramour for a three-hour tour of their ancient love story and all the various subplots.

The play paints boldly from a palette of honor, loyalty, and betrayal, depicting these legendary lovers in their middle years holding on to their political ties more than their romantic ones. The politics get freshened up by Godwin’s choice to set the production in modern times – no fancy, Egyptian beaded crown or togas, and sandals this time. Now earthy-toned, desert fashions and sharp military uniforms place the actors into current times. We even get to see the brave Mark Antony look like a guest at Mar-a-Lago, dressed in a tropical print shirt and Bermuda shorts. The costumes were designed by Evie Gurney. The massive set design, complete with turntables and space both vast and intimate, was designed by Hildegard Bechtler with lighting design by Tim Lufkin.

In the first-named title role, Ralph Fiennes is equal parts commanding presence and a shell of his former self, as one of the Roman triumvirates. Fiennes is a wonderful actor in his film appearances but his true majesty lives through his stage performances, this one included. The role allows for all levels of passion, humor, and seething rage, which the actor makes clear throughout the three hour playing time.

He is matched by Sophie Okonedo’s mature and regal performance as Cleopatra. As described in Act 2 of the play, Cleopatra is seen thusly: “Age cannot wither her, nor custom stale her infinite variety.” Okonedo certainly works to fulfill this character description. American audiences might recognize Okonedo from such film and television roles in such titles as “The Slap” (original Australian series), “Chimerica,” her Oscar-nominated turn in “Hotel Rwanda” (2004), and the upcoming film “Death on the Nile.” As the queen of the Nile, Okonedo brings out Cleopatra’s mercurial nature as well as her calculating manner, trying to rule in a world dominated by men. Scenes between Fiennes and Okonedo are finely tuned and compelling. Cleopatra’s scenes with her loyal ladies-in-waiting Charmian (Gloria Obianyo) and Iras (Georgia Landers) are equally dynamic, showing the strong connection the handmaidens share with their queen, all the way to the bitter end.

The continuation of the Caesarean dynasty plays out concurrently in Antony and Cleopatra, featuring the machinations of the younger Octavian Caesar (Tunji Kasim), and other political figures from the period. (Reading the referenced synopsis will help preview the scope of the story.) Another memorable and well-played role in this production is Tim McMullan as Antony’s most loyal and trusted confident, Enobarbus, who gets to deliver one of the play’s most famous lines, recounting the glory of seeing Cleopatra atop her royal boat. “The barge she sat in, like a burnished throne, burned on the water.”

Another particular innovation to watch out for is a special guest appearance by a live snake when Cleopatra’s tragic end is nigh. Having seen, and even been in a production of this epic tragedy in my younger days, I can say it is the first time I have seen a live snake cast as the hissing assassin and its presence added a heightened sense of danger – or at least it did for this anti-snake campaigner.

As one of the finest playhouses in the world, the National Theatre is truly a gem, and right now the company is providing theatre lovers all over with blessed respite from binge-watching trash television or banal TikTok dance videos. As a huge Shakespeare fan, it was also nice to spend time with a grand adventure and heart-rending tragedy of lesser renown but possessing top-notch acting and phenomenal production values.

Advisory: Stage fighting and violence, adult situations. Recommended for ages 12 and above.

Antony and Cleopatra, a National Theatre at Home streaming presentation, is available for free on the theater’s YouTube page beginning Thursday, May 7 at 2 pm Eastern Time. Click here for access. The production will be available until Thursday, May 14, 2020, at 2 pm.