Theatre Review: ‘Hairspray Live!’ on The Shows Must Go On online 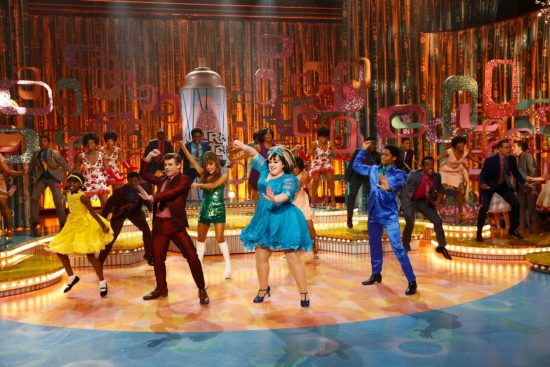 The finale of ‘Hairspray Live!’ playing on YouTube on The Shows Must Go On. (Photo by Justin Lubin/NBC)

Hey, there quarantined Baltimore! The nicest kids in town are back and they are bringing their uplifting show to the world for 48 hours starting today. The show is the award-winning television adaptation of Hairspray streaming this weekend courtesy of The Shows Must Go On.

I remember when the original John Waters film Hairspray came out in the 1980s – his most mainstream film to date. I was even more bowled over by the stage musical adaptation in 2002, with a catchy score by Mark Shaiman and Scott Wittman and a book by Thomas Meehan and Mark O’Donnell – all Tony winners for their work. It was inevitable that Hollywood reclaimed the show (in 2007) and I was thrilled when it was announced that producers Neil Meron and Craig Zadan had selected Hairspray for the live television spectacular treatment. Directors Kenny Leon and Alex Rudzinski shared the duties of leading the production with the original Broadway choreographer, Jerry Mitchell, working his magic with the musical numbers.

The popular show is known for highlighting the empowerment of the individual as well as tearing down – via song and dance – the racism which was still alive and well in Baltimore (and much of the nation), circa 1962. As the central figure, Tracy Turnblad, Maddie Baillio was cast after a nationwide search. Making her debut, Baillio has all the qualities that have made Tracy such an important character – a powerful voice, expressive dancing, and immediate likeability and charm. From the opening number, “Good Morning, Baltimore!” to the closing, Baillio won this viewer over throughout the program. As Tracy maneuvers through her contentious audition for the dance show, to meeting heartthrob Link Larkin and securing a spot on “Corny Collins Show,” and becoming a civil rights pioneer who assists in integrating the formerly segregated program, Baillio more than holds her own as the larger than life teen.

The top of the list of supporting stars in this production is Fierstein as Tracy’s loving mother, Edna. Taking a cue from Divine from the 1988 film, Fierstein portrayed Edna as a fully realized performance, with never a wink or drop of character. That being said, Fierstein’s comic chops and impeccable timing were tailor-made for the role. So what if his characteristic bass-baritone growl is lower than Bea Arthur with a chest cold, Fierstein is Edna in my book. Kudos to the producers for casting Fierstein for the role as well as adapting the script for the television.

Television and film funnyman, Martin Short brings his memorable stage presence to the production as Tracy’s dad, Wilbur, the owner of a Baltimore joke shop. Short’s impish quality works well with Fierstein’s gruffly ladylike demeanor and their charming duet “You’re Timeless to Me” is a gem.

I must admit the rest of the supporting cast is a mixed bag of success, even with all the star power at work. Kristin Chenoweth chews the scenery appropriately as the resident villainess, Velma von Tussle, the tv producer who still believes in segregation. After coming to prominence on “Dancing with the Stars,” Derek Hough has made a name for himself in many forms of media. His dancing skills were highlighted throughout Hairspray Live! making Mitchell’s choreography look easy. Hough’s singing voice is pretty good too, especially when he leads the song “Ladies Choice” – written for the film musical. I could see a Broadway producer calling on Hough to star in Dick Van Dyke’s old role as Albert in Bye Bye Birdie some day.

As Tracy’s best friend, the sheltered Penny Pingleton, pop-star Ariana Grande, mines the role for laughs while taking advantage of the moments to showcase her powerful vocals, especially once Penny blossoms near the end. Tracy’s perky, mean, and skinny rival on the “Corny Collins Show,” Amber, is played with relish by Dove Cameron, a former Disney star, who channels a young Debbie Reynolds as played by a Hitler youth. Link (Amber’s former flame who falls hard for Tracy) is played with charisma by another Disney refugee, Garrett Clayton. Ephraim Sykes makes a strong impression as Seaweed, one of the Corny Collins dancers relegated to “Negro Day” on the Baltimore program. Keep an eye out for a young scene-stealer, Shahadi Wright Joseph, as Li’l Inez. Between Baillio and the other youthful cast members, the talent pool looks promising if these young performers maintain their showbiz careers.

The stars in Hairspray Live! also include Oscar-winner, Jennifer Hudson, as Motormouth Maybelle who has a field day with “Big, Blonde and Beautiful,” and the anthem for equality, “I Know Where I’ve Been.” Comedic legend Andrea Martin takes on the repressed Mrs. Pingleton and nails every scene. Sean Hayes, Rosie O’Donnell, and Billy Eichner take on cameo roles as Mr. Pinky, the gym teacher, and a newscaster, respectively. Eagle-eyed viewers may also spot former Tracy Turnblad’s Ricki Lake and Marissa Jane Winokur as “Pinkettes” when Tracy and Edna meet Mr. Pinky.

With all the star power, how does the staging work? Pretty well, especially compared to the earliest television musicals from Meron and Zadan. Earlier efforts The Sound of Music and Peter Pan were both mixed affairs, from what I saw. Here co-directors Leon and Rudzinski used the various sets – eye-popping designs by Derek McLane – to best advantage, giving this production a polished look, including many exteriors which allow the larger production numbers to breathe and expand. The costume design for Hairspray Live! is the icing on the cake, with snappy period fashions that are exaggerated just enough to pop with day glow colors and oversized lines, topped off by amazing wigs and hairstyles designed by Miia Kovero. Finally, Lon Hoyt and Scott Riesett took great care with Shaiman’s award-winning score.

For a breezy two hours, I would say welcome to the sixties all over again and go to YouTube for Hairspray Live! while you can. If you miss the streamed presentation, the DVD is readily available.

Advisory: The video is not rated but there are mild adult situations that might not be suitable for children under age 11.

Lee Jeffreys enjoys the opportunity to experience the rich and diverse theatre offerings in the Washington, DC, Virginia, and Maryland area. He is constantly stunned by the level of talent on display from theatres large and small in the region. Jeffreys has worked in the non-profit arena and for media companies off and on for many years.