Theatre Review: ‘The Grapes of Wrath’ streaming from Blackfriars Playhouse 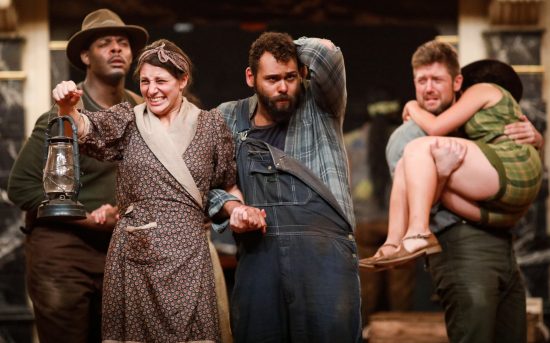 John Steinbeck on an Elizabethan stage:  The ensemble of ‘The Grapes of Wrath’ at Blackfriars Playhouse in Staunton, Virginia.  Photo courtesy of American Shakespeare Center.

…an opportunity to experience outstanding acting and witness a thought-provoking performance of a modern work on the Elizabethan-style stage.

John Steinbeck on an Elizabethan stage? Blackfriars Playhouse, a
recreation of a venue of Shakespeare’s time in Staunton, Virginia, shows how well this can work in its current production of “The Grapes of Wrath.” The Blackfriars cast of the American Shakespeare Center uses its trademark  minimal stage and props to focus attention on the characters and their situation in this modern American classic. The staging allows the  actors to shine, giving the work an unexpected freshness and immediacy.

Steinbeck’s 1939 novel takes place in the Dust Bowl of Oklahoma, part of the drought that spanned the southern plains of the United States, worsening the hardships of the Great Depression. Tom Joad comes back to his family after a stint in the penitentiary for killing someone in self-defense. On the road, he meets minister Jim Casy – or former preacher, as the character ever reminds us. Tom finds his family’s homestead abandoned. The Joads are preparing to leave for California in order to build a new life – an early twentieth-century Gold Rush towards orange trees, warm weather, and above all, jobs. The characters endure great hardship along their journey and, frustratingly, further misery and injustice upon their arrival in the supposed land of promise.

Michael Moret is splendid as Tom Joad. Moret shows both Tom’s towering internal strength as well as his helplessness in the face of the tragedy surrounding him – from his homecoming to his poignant reaction to the death of a friend. Mia Wurgaft is similarly outstanding as his mother, Ma Joad, for she depicts the rough exterior of her character as well as deep tenderness and empathy. As the ex-preacher Jim Casy, Alexis Baigue is simply dazzling. He superbly portrays a man doubting his faith and struggling in prayer even as the people rely on him for spiritual support in their wretchedness. He is also able to convey the residual sense of idealism which leads him to help oppressed workers unionize. Indeed, it feels as if we are seeing a person plucked straight out of the Oklahoma Dust Bowl. Topher Embrey and Madeline Calais, whom we last saw in “Midsummer 90” at Blackfriars as Shakespeare’s Bottom and Puck, are also utterly convincing in various roles.

Directed by Jose Zayas, the staging, as mentioned above, is at once sparse and brilliant. The stage is largely empty except for a few wooden crates and old blankets. These minimalist props are rearranged to suggest convincingly decrepit homesteads, a beat-up truck, fields, and roadsides. This provides a marvelous way to convey the barrenness of the Dust Bowl, the Depression,  and the dashed hopes of a better life in California.

As is often the case with Blackfriars, the actors and actresses perform music prior to the performance and during the intermission. “California Dreamin’” signified the continuing allure of California and alludes to, in an ironic way, the Joad family’s dreams of jobs and the good life.

One problematic element must be mentioned. While the acting is outstanding and the camerawork is very effective, the sound quality could use improvement. This may matter less in Shakespearean plays which are widely known to the audience. “The Grapes of Wrath,” however, is not performed as frequently, and thus, the dialogue not as well known.

“The Grapes of Wrath,” adapted by Frank Galati, is a worthy introduction, or re-introduction, to this widely-read American literary work about character and social injustice. Even better, it is an opportunity to experience outstanding acting and witness a thought-provoking performance of a modern work on the Elizabethan-style stage.

Running time: Two hours, 24 minutes, including musical entertainment 15 minutes before the play and during the 15-minute intermission.

Presented by American Shakespeare Theatre, Blackfriars Playhouse,
10 S. Market Street, Staunton, VA 24401, 1.877.MUCH.ADO. This production streams through May 31. Tickets and the link for streaming can be found online.