Audio Review: “The Premature Burial” by the Poe Theatre on the Air, Streaming at WYPR, Baltimore 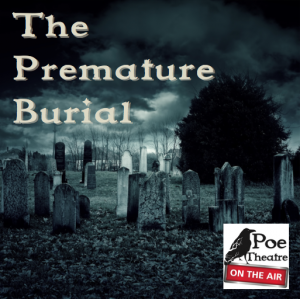 The monthly podcast series (heard on Baltimore’s WYPR and by Podcast on NPR) by the Poe Theatre on the Air is developing an excellent reputation, for it is not only dramatizing the famous stories of Edgar Allan Poe’s “Tales of Mystery and the Imagination,” which are easy to adapt, but also taking on those which do not lend themselves easily to dramatization. Such a case is the June 2020 offering of “The Premature Burial.” Here Doctor Maillard, the sinister host, conducts an interview with one of the female patients in his unusual sanitarium. The woman, Mrs. Stapleton, is cataleptic, meaning that she has bouts in which she is conscious but rigidly paralyzed and unable to respond to those around her. She explains that she fears to fall asleep lest she awake to find herself  buried alive. Our patient then recounts a tale in which she marries her lover but never told him of her condition. One day, Mrs. Stapleton’s husband discovered her body seemingly lifeless. After physicians have confirmed her to be deceased, she is indeed buried alive. As Mrs. Stapleton is the narrator, of course, she lives to tell the story.

The performances by series creator and director for this episode, Alex Zavistovich (as Dr. Maillard) and Jennifer Restak (as the sanitarium patient Mrs. Stapleton) respectively, are first rate. Together, they make what sounds like a far-fetched situation believable and easy for the listeners to imagine in their hearts that the eerie events recounted might actually have happened, even as their minds tell them that it is simply a radio show. The nineteenth-century atmosphere is maintained in part by the actors’ excellent use of “Mid-Atlantic” accents in their roles, complemented by atmospheric music which fondly recalls such classic radio series as “The CBS Radio Mystery Theater” (which also aired on National Public Radio and adapted this tale in 1975).

It is this sense of mystery which the Poe Theatre on the Air captures so admirably, making the story work in our own modern era.

This production is all the more remarkable because the story itself is a difficult one to adapt, especially in audio format. “The Premature Burial” presents what appear to be case studies of premature interment in the grave, though one is unsure of whether Poe is recounting real or fictional events. Poe delights in teasing his audiences this way.  The seeming core of the story, an actual premature burial, is rendered anticlimactic by the necessary logic of the survival of the narrator. A further complication is the fact that a major element of the story revolves around a “galvanic battery,” a term with which many (including this reviewer!) may initially find unfamiliar. Consultation with Dr. John M. Bozeman, a scholar on early technology (and himself an occasional writer for MD Theatre Guide), revealed that galvanic batteries are now quite common – a car battery is an example of one. However, at the time Poe was writing, these batteries played the role occupied by astronomical black holes today – objects on the cutting edge of science, yet also filled with fearsome mystery, making them suitable for literary exploration.

In Poe’s time, an era before CPR had been discovered, batteries could even bridge the gap between life and death. Quoting from the Poe story: “The mention of the galvanic battery, nevertheless, recalls to my memory a well known and very extraordinary case in point, where its action proved the means of restoring to animation a young attorney of London, who had been interred for two days.” It is this sense of mystery which the Poe Theatre on the Air captures so admirably, making the story work in our own modern era.

After listening to this most enjoyable episode of the new Poe series, we had the opportunity to interview Mr. Zavistovich. He revealed that he is a native of Washington, D.C., and founder of the horror-oriented, Molotov Theater Group. This group later provided the germ for the National Edgar Allan Poe Theatre. Mr. Zavistovich stated: “One of our most popular shows during Molotov’s peak was ‘Nightfall with Edgar Allan Poe’ by Eric Coble. The show was sponsored in part by Raven Beer, which also sponsors Poe Theatre on the Air. The transition to focus on Poe was a logical extension of Molotov’s work. The ultimate ambition of the National Edgar Allan Poe Theatre is a live-performance venue.”

Thus far, this live-performance venue is still out of reach, or “a dream within a dream,” to quote the Poe poem which closes each episode of the current audio series. Nonetheless, Poe Theatre on the Air has allowed Mr. Zavistovich to achieve a notable part of this goal: “In cooperation with WYPR-FM in Baltimore, I have been able to establish name recognition and an audience reach that exceeds what I would have been able to accomplish any other way in the same time.”

Regarding his move to Baltimore, a city in which Edgar Allan Poe lived, was productive, and is buried (though not prematurely), Mr. Zavistovich shares with us: “My relocation from the Maryland suburbs of Washington, D.C., to Baltimore City is an expression of my admiration of the Baltimore theatre scene and a show of good faith to make a difference in Baltimore by promoting literacy through theatre.” Mr. Zavistovich also informs us that he is a member of the board of directors of the Poe House in Baltimore.

We very much look forward to one day seeing live Edgar Allan Poe theatre productions in the city of Poe. Near term, we also eagerly await more Poe Theatre on the Air productions. The Zavistovich troupe is currently working on performing Poe’s “Eldorado,” a work which is not a tale at all but rather a poem. We wonder who the neurotic new patient will be at the sanatorium and what cures (or torments?) that the aptly named quack, Dr. Maillard, has in mind.

“The Premature Burial” runs 23 minutes and may be heard here.