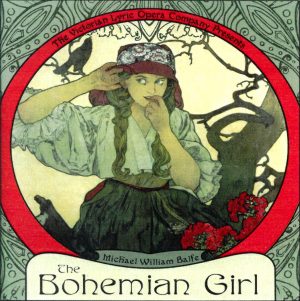 While the Victorian Lyric Opera Company has been unable to launch its planned production for June, VLOC’s “The Bohemian Girl” and light operatic fare are available for home listening on compact disc.

An unusual operetta was to have been performed this month by the Rockville-based Victorian Lyric Opera Company – “El Capitan” by John Philip Sousa, an exotic romance by America’s “March King” set in Peru of the 1500s. Regrettably, the production had to be postponed due to the Coronavirus pandemic. It is rescheduled for June 2022. Yet fans of the Victorian Lyric Opera Company may still enjoy a VLOC performance of a Sousa operetta — as well as of other comic operas — via the medium of compact disc.

“The Charlatan” (billed in the VLOC performance as a “restoration”) was another operetta written by Sousa, a native of Washington, D.C. In this full performance on a two-CD set, Sousa —  renowned for patriotic fare such as “The Stars and Stripes Forever” and “Semper Fidelis”— appears as a character at the opening of his own operetta. As the title “The Charlatan” suggests, the comic plot involves chicanery and slight of hand.

“ . . . we recommend enthusiasts of operetta and comic opera to create their own season of the Victorian Lyric Opera Company here and now with an excellent assortment of compact  discs from past VLOC performances . . . “

It should be emphasized that the Victorian Lyric Opera CD sets contain not just musical portions but recordings of the entire productions, dialogue, and all. Sousa as a character in the operetta, for instance, explains to the audience that “while you may know me as the March King, I actually spent a fair amount of my time in the musical theatre.” What is more, Sousa as composer is working here somewhat in the European operetta tradition, and thus he includes a swaying Viennese-style waltz “The Lilacs of Your Love May Die,” sung wondrously by soprano Denise Young, accompanied by a chorus. One also does not expect a mazurka from Sousa, and yet it comes as a delightful surprise at the opening of Act III. For aficionados of the standard Sousa repertoire, the more typical, robust Sousa march style comes through clearly in the strains of the overture — much as it does in the overture to the postponed “El Capitan.”

There are, of course, other complete performances on compact disc offered by VLOC, including  Johann Strauss II’s “The Gypsy Baron,” an archetypical Austrian operetta not often performed in English. The plot is charming and very Viennese, with aristocratic characters disguising themselves as persons of lower social rank. Enjoyable musical highlights include the Hungarian strains of an exciting Overture and the Chorus’ thrilling “Triumphal March.” Yet the very special moment in this production is the “Gypsy Song (“Zigeunerlied”), performed movingly by mezzo-soprano Cara Gonzalez.

Conductor and musical selector Joseph Sorge shares with us that it can be quite the chore to find the musical scores and appropriate translations for European operettas such as this by Johann Strauss II. What makes this recorded version work especially well is that the Victorian Lyric Opera Company does not always abide by formal translations, but has fun using dynamic equivalence translations, thus bringing Viennese opera into a more American context. A case in point is a bit of dialogue in which a Count announces  he is attached to “the Austrian Imperial government [as] deputy chairman of the Imperial privy Commission for morals.” “The imperial privy?” his interlocutor responds. “Those Austrians! They’ve got a bureaucrat for everything!” The VLOC “Gypsy Baron” again leaves behind nineteenth-century Vienna for topical pop-culture references as it makes  mention of “Fifty Shades of Grey.”

We next review “The Bohemian Girl,” which Mr. Sorge tells us “was a dream project of mine ever since I heard a recording done by Richard Bonynge and the National Symphony Orchestra of Ireland.” Composed by Irish composer Michael William Balfe, this English-language opera holds some fame in American culture as the subject of a 1936 Laurel and Hardy feature-length film of the same name. The plot finds Polish noble Thaddeus in disguise in exile saving Arline, daughter of an Austrian count. She is later kidnapped and —  after much adventure — again rescued by Thaddeus as the two fall in love.

In the Victorian Lyric Opera Company production of “The Bohemian Girl,” soprano Alexandra Friendly as Arline gives a glorious rendition of the opera’s famous song, “I Dreamt I Dwelt in Marble Halls.” This aria, covered by — among others — the popular Irish recording artist Enya, is very much a highlight of the concert. It also rewards the listener to prepare for a particularly good clarinet solo in Act III of the performance. (We are not certain whether to credit Laura Langbein or Laura Bornhoeft, the two excellent clarinetists in the production).

The mainstay of the VLOC repertoire is Gilbert and Sullivan, and we would be remiss if we did not include some commentary on their comic opera “The Grand Duke,” or “The Statutory Duel,” in a delightful sound recording.  Although this is not one of Gilbert and Sullivan’s better-known works, “The Grand Duke” nevertheless showcases the outstanding scoring of Sir Arthur Sullivan and the memorable witty lyrics of W.S. Gilbert.

In this, their last operetta, everything is “topsy-turvy.” An Englishwoman talks with a German accent, German characters speak English with “RP” accents, and there is a “turned-around” view of Freemasonry, the fraternal society of which the two artistic collaborators were members. Here they speak of the Ersatz Masonic order in topsy-turvy fashion as “the mystic regulation of our dark Association.” The plot itself involves a man and woman in a theatre troupe producing Shakespeare’s “Troilus and Cressida” who want to be married. Yet all the clergy in town is in an audience with the unpopular Grand Duke of the comic opera’s title, just as a cabal plots the ruler’s assassination.

This operetta features tuneful melodies such as “Now Bridegroom and Bride Let Us Toast,” “Happy Couples, Lightly Treading,” and “Come Hither, All You People,” all of which are performed by an ensemble in an energetic, engaging fashion in an excellent sound mix (although the mix is not even on every CD, as many a performance was recorded not in a  studio but  live at Rockville’s F. Scott Fitzgerald Theatre). If a full recording — complete with dialogue — of a lesser-known G&S work such as “The Grand Duke” sounds unusual, than surely is the VLOC recording “Haddon Hall,” a rare light opera with music composed by Sullivan and a libretto written not by Gilbert, but penned by Sydney Grund.

VLOC recently announced its productions for the 2020-2021 season – A Gilbert and Sullivan “Drawing Room,” in which “audience members are guests at a dinner party of the fictitious Rockville Victorian Society;”  “New Moon” by Sigmund Romberg and Oscar Hammerstein II, billed as “Broadway’s last hit operetta;” and, Gilbert and Sullivan’s “Iolanthe,” described by VLOC as “a world of magic, wonder, and fairies not so far from our own.” While awaiting this exciting upcoming series, we recommend enthusiasts of operetta and comic opera to create their own season of the Victorian Lyric Opera Company here and now with an excellent assortment of compact discs from past VLOC performances here.