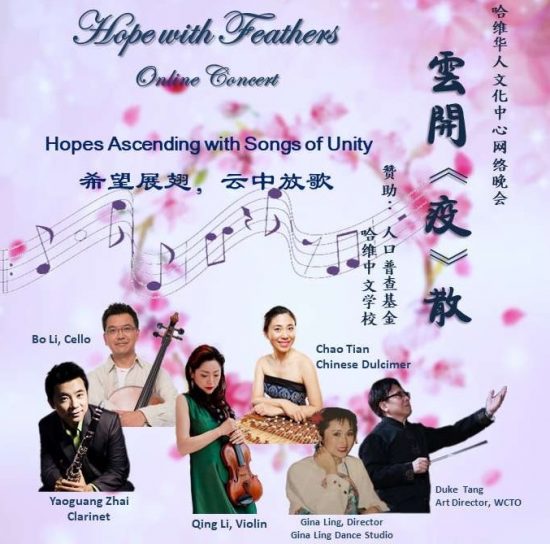 Even though these are difficult times, Emily Dickinson’s poem “Hope” reminds everyone that life is not hopeless, saying, “’Hope’ is the thing with feathers, That perches in the soul, And sings the tune without the words, And never stops at all.”

Appropriately titled “Hope with Feathers,” the Howard County Chinese Cultural Center is presenting a free, one hour and fifteen-minute online concert on YouTube, June 12th at 8PM.  The virtual concert is designed to express gratitude to health care workers who are fighting hard every day to save lives during the COVID-19 pandemic.

In addition to the concert, the Chinese community of Howard County is showing support for frontline health care professionals region-wide by donating $100,000. They also donated 20,000 in personal protection equipment.

Jiabei Wang, the leader of the event told me in an interview on Zoom, “We feel at this moment we should bring people hope and never give up” by presenting this free virtual concert, featuring “three Chinese professional performers from Baltimore Symphony Orchestra.”

Guoyi Fu, from the Howard County Chinese Cultural Center also told me in an interview on Zoom that “regardless of what you like, there is something for everyone to enjoy,” including Chinese traditional music, dance, singing, and even a T’ai chi demonstration.

Guoyi Fu, is also a member of the Washington Chinese Traditional Orchestra, lending his talents as a Chinese bamboo flute player.  The 16-piece orchestra will include in their concert a Chinese folk song which is very popular in western China called “Swan Geese.”  Mr. Fu went on to say, “Music is a very important part of culture. In order to understand culture, you should understand the music.”

To watch the concert live, visit their YouTube channel. To learn more about the Howard County Chinese Cultural Center, visit their website.