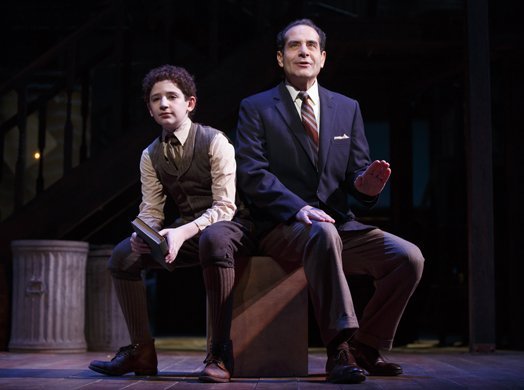 Tony Shalhoub is a man of many talents. He sings, dances, and portrays unparalleled characters. Think Monk on TV who brought awareness to OCD; the sensitive Egyptian Captain in the award-winning musical, “The Band’s Visit;” and the hilarious portrayal of Mrs. Maisel’s long-suffering Jewish father. But my favorite character is his movie role of Chef Primo in “Big Night.”

…this show is a gem…

As a longtime fan, I jumped at the chance to see “Act One,” the 2014 stage version of Moss Hart’s autobiography starring Shalhoub in three distinctive roles, George S. Kaufman, Hart as Narrator in the play-within-a-play, and Hart’s English-born father who berates his son with his cockney accent and accusatory attitude. Santino Fontana (the Tony-nominated prince in Broadway’s “Cinderella”) was cast as the eager playwright, Moss Hart, and Andrea Martin as Aunt Kate, a beloved figure in Hart’s childhood. Twenty-two actors play over 40 parts in this  production, but the above three are surely the stars.
Moss Hart published his autobiography, “Act One, ” in 1959 to rave reviews for its in-depth look at the trials and tribulations of putting on a show…and, hopefully, bringing it to Broadway. Best remembered for the comedies he co-wrote with Kaufman, Hart shares stories of his immigrant family living in the Bronx, the setting for “Act One.” It’s a rags-to-riches tale with a lot of bumps on the road to success and filled with a range of emotions.
“The theater is not so much a profession as a disease, and after attending my first play at the age of 11 it was the beginning of a lifelong infection…you see the stage is the inevitable refuge of an unhappy child,” the adult Hart (Shalhoub) tells us in the prologue. “The first retreat a child makes is to contrive a play world of his own,” younger Hart (Fontana) adds as he begins the story of his five-member family living in a two-bedroom tenement house “where we were forced to take in borders to make ends meet.”
It’s a difficult story to tell with his father’s rants – Barney Hart (Shalhoub) kicks Aunt Kate out of his home and family. Towards the end, he leans against his son’s shoulders, perhaps asking for forgiveness, a tender moment, indeed. Humor, too, abounds in the two act play. Most memorable are the scenes where Aunt Kate gushes her love for theatre, especially to her young nephew, “Mossey,” who adores her. “What’s wonderful about the theater is the lights go out when they are supposed to,” she quips a la diva.
Other poignant scenes include Hart’s plea to Kaufmann to finish the third act of “Once in a Lifetime,” the play that would change his life. “I want a life in this business,” Hart said with unabashed passion. “I want to do it with you. We’re a good team…and we can fix this, George.”
Costume designer Jane Greenwood captured the look of early 20th century through the Prohibition Era with fur stoles draped across the ladies and hats galore. Louis Rosen did the same with his original musical score that adds to the feel of the play.
Now it’s your turn to catch “Act One” with a close-up view of the cast, a bonus, indeed, as the dialogue comes across clearer and funnier than seeing it live. Though this production does not provide that special experience of being in a darkened theater and watching magic come alive on stage,  this show is a gem and worthy of watching online.
One drawback, though, is the lack of a visual overview of the amazing moveable set by Beowulf Boritt with those special turn-of-the-century touches like a crocheted table cloth, candlesticks brought from a faraway country, an old-fashioned typewriter with paper and books strewed everywhere. On television, it’s difficult to get a feel for the authenticity, though the characters come across as deliberate and sincere.
Live or streamed, “Act One” stands above other similar tales we’ve seen or read before because it has heart, no pun intended, and honesty — a rare treat during the shutdown of Broadway.
Running time: Two hours and 21  minutes.
“Act One,” is streaming free now through Friday, July 3, at 8 p.m. EST on Lincoln Center Theater’s YouTube channel here.