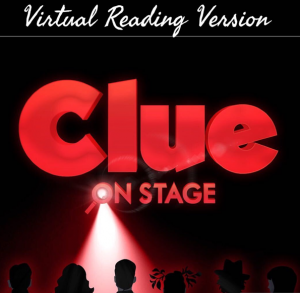 A rainy night in Fairfax was just the right night for Clue, a game played on a board with dice, pieces, and facsimiles of murder instruments – a murder in a drawing room mystery. The Fairfax Clue session was not a game, however, but the most recent production of the City of Fairfax Theatre Company (CFTC).  The company has taken an interactive approach during the current pandemic, offering virtual readings of plays by volunteers, the latest being “Clue,” written by Jonathan Lynn.

Invented in the UK under the name Cluedo, Clue has leapt off the game board several times before in various media and tributes, such as in the 1985 Paramount motion picture “Clue” with its three endings (which one the movie-goer saw would depend on which cinema had been entered). Sixties’ icons John, Paul, George, and Ringo played an extended game of Clue with Cape Cod locals in “The Case of the Four Little Beatles,” a light-hearted mystery story on “Cape Cod Radio Mystery Theatre.”  Also, “Clue The Musical” hit the stage off-Broadway in the 1990s.

The Fairfax virtual reading, still streaming, is of a version of “Clue” following the plot of the 1985 film, with characters assuming the identities of the six personalities from the board game. In this instance, they all seem to have some connection to Washington, D.C. The mystery begins in a large, strange house with the butler, Wadsworth, and the French maid, Yvette, as the guests assemble.

The Fairfax quarantine edition of “Clue” features a young cast (high school and college) of local actors, often dressed for the occasion. Samba Pathak as Professor Plum wears a plum-colored jacket. Sophia Skiavo as Miss Scarlett is in scarlet attire and lipstick, and Kate Parr as Mr. Green is well-costumed, sporting a classic hat and wearing every color but green! Another moment when this production seems to be more than a mere reading is when each actor holds up a prop (candlestick, wrench, rope, and other instruments of murder) in unison. As the lights go out in the mansion, all the players switch their cameras to an “off” setting – low tech, but very effective. The play first jumps from character to character, but it works best when we see the whole cast as a grid, mostly in rooms with different colored backgrounds. The actors also used a lot of physical gestures, especially in moments of murder. The production will bring back pleasant memories for those who remember the film.

Alissa Gooding, the director of the production, had this to say when asked why “Clue” was chosen for this production:  “My theater experience lies in costume design, so this was my first opportunity to direct a show, and it was phenomenal. When choosing a show to direct, “Clue’ was an obvious choice due to the fact that I grew up playing the board game and the scripted play includes enough humor from the wordplay that we could still convey in our virtual format.” One example is when “they turned their bodies to Mr. Boddy.”

I will not betray the ending to this mystery, but the production inspired me to bring my board game of Clue out of its drawer and play during these nights of quarantine. Roll the dice, Mrs. Peacock!  Then it’s your move, Col. Mustard!

The City of Fairfax Theatre Company performance of “Clue,” including a cast discussion after the presentation, can be found here.