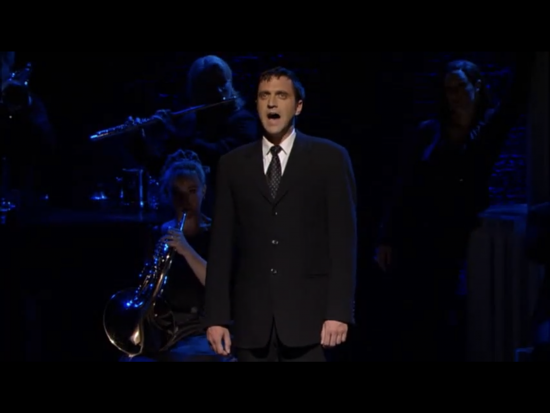 Raul Esparaza as Robert in the 2006 Broadway revival of ‘Company.’

Brittle, sophisticated, witty, and tuneful are just a handful of words that could be used to describe Stephen Sondheim and George Furth’s 1970 masterpiece of concept over plot, the musical comedy, “Company.” Broadway audiences were just about to embrace the newest revival of this seminal show as the global pandemic gripped the world and brought the curtain down on live theater around the world.

…this “Company” allows Furth and Sondheim’s sophisticated musical tale to work its magic.

As we await the resurgence of Broadway shows, including the new “Company” revival, YouTube can give us a taste of a previous production that examines the single life of the upper-crust in New York City. The Tony Award-winning revival of “Company” from the 2006-07 season was preserved by Great Performances on PBS and is available on YouTube with no strings, just the production.

Whereas the 2020 revival of “Company” reverses the sex of the characters, the 2006 production used a different type of gimmick to breathe new life into the (then) 36 year-old musical. Focusing on Robert, a confirmed bachelor, being feted by his mostly married friends for his 35th birthday, this musical forgoes a traditional plot structure. Here, George Furth’s sophisticated book is instead a series of vignettes where Robert –“Bobby, Bobby baby, Bobby bubi, Robby” to his friends – interacts with the different married couples who make up his friends, as well as the young ladies he has dated. Stephen Sondheim’s landmark score and fitting lyrics carry the show from one segment to another. This show made a huge impact in 1970, placing Sondheim on the map with the Broadway elite.

What sets this 2006 revival apart from others is director John Doyle’s additional concept of having the cast also serve as the orchestra – a concept he also tried with the Broadway revival of “Sweeney Todd” in 2005. “Company” requires a small cast and having the actors double on instruments further streamlined the production, adding to the slick staging which fit perfectly on a jewel box-styled set design by Paul Gallo. Ann Hould-Ward’s stylish costumes keep the palette a monochromatic black and white. Somehow Doyle keeps the action moving, even though there is no real choreography, except for natural staging and a few shifts in positions when an actor has to wield their cello or saxophone.

The performances are uniformly strong, starting with the headliner, Raul Esparza as Bobby. The actor is known as an exciting stage performer and in his role on TV as New York City ADA Rafael Barba during his six-year run on “Law and Order: Special Victims Unit.” Esparaza is both enigmatic and charming as the conflicted bachelor and brings his powerful singing voice to such Sondheim’s songs as “Someone is Waiting,” “Marry Me a Little,” and “Being Alive.” The video captures portions of Esparza’s performance as Robert that might have been overlooked in the Ethel Barrymore Theatre. There are times when Robert just watches his friends or lovers intently, sphinx-like, taking in their petty arguments, romantic babble, and other banter as a keen observer. Esperzas’s performance suits the character to a “t.”

Lending able support to Esparza’s Robert are all the people he interacts with throughout his birthday. B****y Joanne is played with supreme control by Barbara Walsh, who even underplays the famous 11 o’clock number “The Ladies Who Lunch” until just the right moment to make it pay off. As the ditzy and marriage-shy Amy, Heather Laws also gives an unusual rendition of Sondheim’s famous patter song, “Getting Married Today.” As Marta, one of Bobby’s lovers, Angel Desai uses her expressive singing voice to celebrate “Another Hundred People.” Desai is joined by Elizabeth Stanley as April and Kelly Jeanne Grant as Kathy – two more of Robert’s girlfriends – in the trio “You Could Drive a Person Crazy,” which also features the three actresses on saxophone.

As revivals go, other than the actor-musicians, this “Company” allows Furth and Sondheim’s sophisticated musical tale to work its magic. The Tony Award voters certainly noticed this revival, awarding the statuette to the show over a field of productions that included “A Chorus Line,” “The Apple Tree,” and “110 in the Shade.” Most likely due to Sondheim’s stature, “Company” is the only revival from the 2006-07 season preserved on video. Thanks to PBS and YouTube we can all enjoy it virtually.

Advisory: Video is not rated but there are mild adult situations and language that might not be suitable to children under age 12.