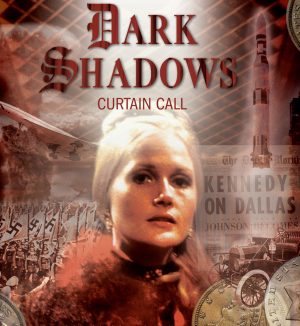 “Curtain Call” starring Nancy Barrett  is one of many “Dark Shadows” audio productions which has the stage as a setting and theme. (Photo from Big Finish Productions).

The television serial “Dark Shadows” originally aired between 1966 and 1971. The show was essentially a soap opera, but one with an unusual twist. Rather than following the tangled lives of ordinary mortals, the show followed the adventures and travails of a vampire, Barnabas Collins, and a mix of family members and associates, some living and some supernatural beings such as werewolves, ghosts, and witches.

After the cancellation of the cult TV series, “Dark Shadows” — like its undead vampiric hero — lived on in syndicated reruns and spin-off works including a stage play, novels, comic books, and several films and television series. Perhaps the most impressive of these, however, has been Big Finish Productions’ expansive audio series. These Gothic productions feature new and expanded story lines, along with impressive voice-work by cast members from the earlier TV shows.

While the vampiric Barnabas Collins was the focus of the original TV shows, he is mainly featured in Big Finish’s early production, “Night Whispers,” featuring the voice of Jonathan Frid, who originated the role on TV but died before the audio series was well underway. Afterwards, Barnabas’ immortal werewolf cousin Quentin is often the central figure. Quentin’s great love is an actress, Amanda Harris, and he encounters her (or her alter egos) in various times across the centuries. This also sets the stage, so to speak, for a number of the later episodes to revolve around theatre and theatre production.

Take, for example, “The Darkest Shadow.” Here Olivia Corey, professional actress (and alter ego of Amanda), performs a show-within-a-show role, in which a mysterious Hollywood production company has reconstructed the Collins homestead of Collinwood in Hollywood for a movie about the supernatural connections of the Collins family. Actors pretend to be actors, which allows for both Gothic drama and occasional sly theatre-themed humor. One such example is when one actor complains, in reference to “Cat on a Hot Tin Roof,” “Tennessee Williams told me I was the finest Big Daddy he had ever witnessed. Now I am reduced to playing stuffed shirts in penny dreadfuls!” These cast-within-a cast members also insist, true to theatre superstition, on referring to “Macbeth” as “The Scottish Play.” There are also references to Arthur Miller’s play, “After the Fall.” David Selby as Quentin and Donna McKechnie as Olivia/Amanda are each in fine form as they reprise their television roles in this troubled werewolf-meets-girl romance.

The episode, “The Eternal Actress,” is set in Los Angeles of the 1950s. It is a noir mystery, similar to “Sunset Boulevard.” The story revolves around an aging silent screen star, Helvetica Stanhope, and a visitor who is a young reporter. Helvetica is in reality Amanda Harris (also played by actress McKechnie). “No market for you silent stars anymore,” Helvetica is told. “We want voices, talking.” The episode also features a number of wonderful “audio visuals.” Helvetica, the black-and-white era film star, has decorated her house in black and white, including the pets! “I only own black-and-white animals,” she says, referring to her pet zebras and skunks. Her guest (played by Andrew Collins) is admonished to observe her “monochrome sensibilities.” While Quentin does not appear, theatre most certainly does, including a reference to Christopher Marlowe’s play “Dr. Faustus.” “Why, this is hell, nor am I out of it. [I am] tormented with ten thousand hells In being deprived of everlasting bliss . . ., ” one of the character quips.

Yet another episode with a thespian theme would certainly be “London’s Burning,” an example of how the Big Finish Audio Series expands upon the original by introducing Rose Faye (niece of the “Dark Shadows” character, Leticia Faye Collins) into the mix. Like Leticia before her in the TV series (and in the excellent Big Finish Audio episode, “Curtain Call,” starring Nancy Barrett), Madame Rose is a music hall singer and dancer. She made a name for herself in 1906 at the Empire Theatre in London. It is now 1941 during the Blitz when she meets Quentin Collins (with Mr. Selby again in fine, sinister voice) in the Hobbs Lane underground station serving as a bomb shelter. Louise Jameson as Rose Faye has a delightful personality in a performance filled with charisma, having come over to “Dark Shadows” from the “Doctor Who” TV and Big Finish Audio Series. The episode has sparkling dialogue, cleverly balancing nostalgia with horror and restrained sentimentality. Performers Selby and Jameson also do excellent work imitating other accents and characters as they dramatize their story – to the listening audience and to each other. (Perhaps because Big Finish Productions is based in the UK, many of the episodes feature British characters and settings.)

We go last to “The Mystery of Stone Heart Studios,” part of a special sub-series of “Dark Shadows” audio dramas called “The Tony and Cassandra Mysteries.”  It features a tour-de-force performance by Lara Parker as the witch, Cassandra Collins, one of many roles she played on the original TV series. Cassandra and private eye, Tony Peterson (Jerry Lacy, also reprising his role from the TV original series), have come to investigate a murder in the sound booth of a movie studio. Ghosts in the studio, cartoon characters such as Curdlespoon the Lion, and humorous self-references to the “Dark Shadows” television program render this a fun and delightful episode.

Happily, Big Finish’s “Dark Shadows” series continues to produce new episodes. They are well acted, with intriguing and exciting scripts as well as enough similarities and differences to the original series to keep the productions interesting. The sound effects are also first-rate. One other feature recommends the series. While “Dark Shadows” aired over 50 years ago, original series stars Lara Parker, Jerry Lacy, David Selby, Donna McKechnie, and Kathryn Leigh Scott all continue to have remarkably vibrant voices, and they are utterly believable as the youthful characters they portray. No doubt owing to a bit of magic from Collinwood and the world of “Dark Shadows!”

The “Dark Shadows” audio productions have different run times. While the episodes are not a serial, they often have interlocking plots. Big Finish Productions of “Dark Shadows” can be ordered here.

A couple of episodes, including “The Missing Reel” which features Quentin Collins acting in early Hollywood, can be heard for free here.