Audio Review: ‘Dinner and a Show’ from ‘Torchwood’ at Big Finish Productions 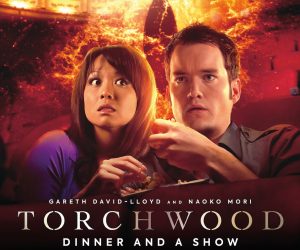 “Dinner and a Show” finds Tosh and Ianto from the “Torchwood” science fiction series at the opera watching Gounod’s “Faust” as aliens prepare to descend on the theatre.

Theatre aficionados are accustomed to the phrase “Dinner and a Show” to mean an enjoyable evening at a dinner theatre. For our purposes now,  “Dinner and a Show” is the title of Big Finish Production’s most recent audio drama installment of the “Dr. Who” spinoff “Torchwood.” In this episode, hostile aliens are set to descend on a performance of Charles Gounod’s “Faust,” an opera based on Goethe’s famous play of a medieval scholar who sells his soul to the devil. Borrowing lines from the opera which might equally apply to this alien attack: “The monster dares insult the skies with contempt [viewing] around him all the vaunted human race…”

This installment is a wonderful introduction to the “Torchwood” series, self-contained and yet engaging the audience with two of the series’ most sympathetic characters.

“Torchwood” is a science fiction series about a team of alien hunters at the Torchwood Institute in Cardiff, Wales. Produced by BBC Wales, it aired on television from 2006 to 2011. Big Finish Productions, a company in the UK which has produced excellent audio extensions of classic television programs such as “Dark Shadows,” “The Avengers,” and “Dr. Who,” has continued this series as well. “Dinner and a Show” stars  Naoko Mori as Toshiko Sato and Gareth David-Lloyd as Ianto Jones. Here we meet two of the more sedate, but also more engaging, personalities of the “Torchwood” team – the “nice characters in ‘Torchwood,’” as audio director Scott Handcock calls them in the post-episode interview. This feeling is enhanced by the excellent chemistry between the two audio stars as they step back into their former television roles.

Our two “Torchwood” characters find themselves at the opera in Cardiff, with Toshiko (“Tosh”) sharing drinks with Ianto. This bit cleverly follows the spirit of the “Faust” opera’s lyrics:  “Come, neighbor! In this fine weather let us empty a bottle together!” Tosh and Ianto are alone together on Valentine’s Day, each experiencing unrequited longing for absent characters. They have not long to deliberate on such matters, as Ianto has come to tell the slightly inebriated Tosh that aliens have honed in on this production of “Faust” in order to make the show and its audience their dinner!

Ianto and Tosh attempt to alert the audience — “Against the power of evil our arms assailing,” quoting again from the “Faust” operatic libretto — in order to encourage opera patrons to run for their lives from the theatre. The Torchwood duo is strikingly unsuccessful as an evil alien in the guise of an opera house official persuades the audience into dismissing these warnings. Ianto and Tosh must then enlist the aid of an opera star by borrowing his operatic demon costume.

The production has a good helping of humor. Mr. David-Lloyd, who plays Ianto, also wrote the script. In the after-show interview, he states that he wanted “a bit more fun, a bit lighter” approach, noting “‘Torchwood’ on screen was very serious, and you never had these light comedic exchanges.” “Dinner and a Show” fills this void admirably. At one point Tosh asks, “Why can’t aliens enjoy opera like everyone else?” It turns out some of them do, though the main aliens are more intent on humans as dinner than as performers. There are also some witty theatre allusions to other musical works such as Mozart’s “Don Giovanni” and Abba’s jukebox hit “Mamma Mia.” Mr. David-Lloyd also chose the opera-house setting for “Dinner and a Show” as the Wales Millennium Centre in Cardiff. The exterior and roof were frequently featured in the television show, leading him to ask, why not change things up and have an episode which takes place inside the Wales Millennium Centre itself?

This installment is a wonderful introduction to the “Torchwood” series, self-contained and yet engaging the audience with two of the series’ most sympathetic characters. We recommend it heartily, and this short adventure should — combined with a listening to Gounod’s opera “Faust” and enjoyed after a meal with a friend — make for an enjoyable dinner and a show.

The 56-minute “Dinner and a Show” installment from the “Torchwood” series may be ordered by clicking here.