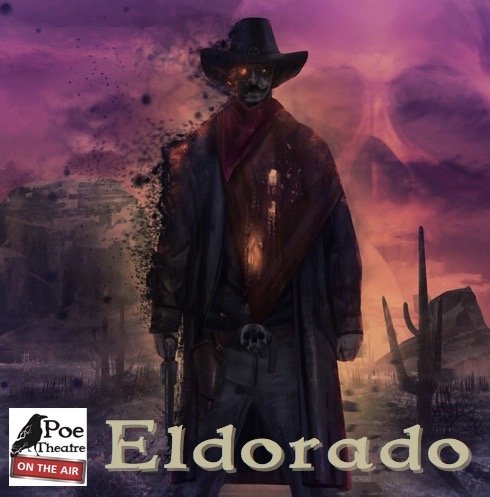 In Voltaire’s picaresque and satirical 1759 novel “Candide,” Candide and company make their way to El Dorado, the legendary city of gold. In 1849, at the peak of the California Gold Rush, Baltimore author, Edgar Allan Poe, wrote his own poem about the fabled golden city. Now that poem has been expanded into a 23-minute narrative drama in the on-going NPR podcast series, “The National Edgar Allan Poe Theatre on the Air.”

It is a tribute to “Poe Theatre on the Air” that it has been able to translate Poe’s melancholy poetic reflection upon both the greed and self-inflicted hardships of the miners of the 1849 Gold Rush into an engaging audio play. This work, as with earlier installments of the “Poe Theatre on the Air” series, is framed as a story told to the mysterious Dr. Maillard, a psychiatrist in a mental asylum. In each episode, the doctor interviews a patient who begins recounting the events occurring in one of  Poe’s classic horror stories, which then transitions into a full audio dramatization of the story.

Here the patient is a man searching for the mythical city of gold, Eldorado. The events recounted take place, appropriately, in the American West of the mid-1800s. The patient narrates being told of the golden city by a “gallant knight,” after which narrator and knight embark on a mission to find the wondrous place — in the words of Poe —“Over the Mountains of the Moon.”  Yet the two are unable to locate either city or gold. Eventually, a mysterious rider approaches, and the gallant knight, now on the verge of death due to old age, asks the shadowy figure where the gold of Eldorado can be found.  The rider ominously alludes to a verse from the biblical 23rd Psalm: in “the valley of the shadow.” Unstated from the psalm is that this is the valley of the shadow of death. One recalls the disillusioned Candide’s comment from Voltaire’s novel that “this is not the way travelers should be treated in El Dorado.”

Very impressively, series creator, host, and star, Alex Zavistovich, is heard in all roles in the production. He tells Maryland Theatre Guide: “As a practical matter, it was somewhat challenging to play several roles at once in this particular production. That continues to be part of the challenge of creating high-quality audio dramas in our current social distancing situation due to the COVID-19 pandemic. In this case, I think it’s suitable – after all, all of the characters exist only in the mind of the man, so I worked with gradually bringing the sound of the voices together more as one entity.” The presentation with its mélange of horror and the Western is successful and appealing indeed, much like the “Tales from the Crypt” episode “Showdown,” directed by Richard Donner.

Adding to the effectiveness of the show is a voice-and-guitar ballad performed by the patient-narrator at the beginning and end of the tale, setting Poe’s original poem to music:

Gailey bedight, a gallant knight,
In sunshine and in shadow, had journeyed long,
Singing a song,
In search of Eldorado.

The chords, delivery, and overall underscore of the episode are evocative of old Westerns, perhaps a tribute to the musical stylistics of  Ennio Morricone. (Mr. Morricone, who passed away earlier this month, famously scored such Sergio Leone “Italian Spagetti westerns” as The Good, the Bad, and the Ugly.) In this, and countless other ways, Mr. Zavistovich ably recreates the frontier atmosphere of the American West.

As for transforming a 23-line play into a narrative audio production, Mr. Zavistovich states: “It was challenging to do the stretching [of the poem] while staying true to the poem’s structure and the message behind it. In my reading of it, there’s an underlying moral, metaphysical, even religious message in the poem that we explore.This is consistent with Poe’s lifelong effort to create a cosmological explanation for human greed.”

This is the twelfth outing of the once-a-month Poe podcast series on Baltimore’s WYPR, and thus the one-year anniversary of this excellent show. “Eldorado” at the “National Edgar Allan Poe Theatre on the Air” is streaming here.