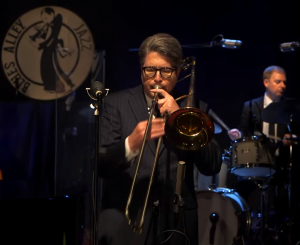 On July 3, the eve of U.S. Independence Day, the Eric Felten Jazz Quartet appeared at the Blues Alley Jazz Supper Club in Georgetown. The event showcased the swing music culture of the Second World War – appropriate for the atmospheric Georgetown venue, which reminds one of the intimate jazz clubs of the ’20s through the ’40s. Yet the nightclub ambience must be enjoyed and recreated from home, as the coronavirus pandemic has meant that this year, bandleader, trombonist, and vocalist Eric Felten and his jazz musicians were obliged to continue their annual tradition in an empty nightclub using an on-line video stream. Mr. Felten, author of the award-winning book  How’s Your Drink? Cocktails, Culture, and the Art of Drinking Well, recommends creating the supper club ambience with the Victory Cocktail: mix sweet and dry vermouth, with lesser parts orange juice, lemon juice, and grenadine. Shake with ice, and let the music play!

While Mr. Felten annually appears at Blues Alley on July 3 with a full big-band ensemble, this year he opted for a quartet. While the band was smaller, he employed the quartet to splendid advantage. The quartet allowed for a more intimate treatment of the introspective pieces, while for the expansive numbers, the fast-paced musical arrangements gave listeners the impression of a fuller orchestra.

Songs saluting America’s mid-twentieth century swing bands used the latter approach. Hits of the Glenn Miller Orchestra such as “I’ve Got a Gal in Kalamazoo” and “Chattanooga Choo Choo” were performed, with the latter piece including the quartet’s effective recreation of the sound of a locomotive slowly gaining speed as it leaves the station. Pianist Tony Knocker comes in for special praise in employing piano phrases from the original full-band arrangement, giving a greater feeling of the Glenn Miller full-orchestra recording.

Per the “Songs of World War II” theme, many pieces explicitly referenced the World War II era, such as the rollicking “G.I. Jive,” which included Mr. Felten’s spirited vocal rendition of Johnny Mercer’s whimsical lyrics: “You go get your breakfast in a beautiful little café they call ‘The Mess’ … [then] you convalesce.” On a slower, more languorous note, “As Time Goes By” recalled World War II for moviegoers who will forever associate the song with the 1942 Hollywood film “Casablanca.” “Long Ago and Far Away,” another early 1940s hit usually played as a ballad, received an unusual up-tempo treatment by the Felten Quartet, with lyrical bass work by Michael Bowie.

Song hits by famous singers during the 1940s were also featured in the program, including upbeat, jazz-centered versions of Frank Sinatra’s “Saturday Night Is the Loneliest Night of the Week,” “All of Nothing at All” (covered by Sinatra as well as Billie Holiday), and vocalist and pianist Nat King Cole’s “Straighten Up and Fly Right.” In a more melancholic moment, Mr. Felten sang “I’ll Be Seeing You,” playing a Tommy Dorsey-style trombone solo. He mentioned this last song was one of the songs of World War II from England, though he may well have referred to the number’s association with the British “Forces’ Sweetheart” Vera Lynn, who passed away last month at the age of 103. Her passing sadly ended another link to the performers of the World War II era.

In some ways, Mr. Felten’s annual Independence Day performances are like a Fourth-of-July fireworks show. While every skyrocket has a grand finale, there is usually an even greater grand finale for the show itself. This year, the ultimate finale was “Take the ‘A’ Train,” one of the best-known jazz pieces of the 1940s, recorded numerous times by, and connected indelibly with, Washington, D.C. native Duke Ellington and his orchestra. This vibrant version featured a virtuoso Felten touch on trombone, Tony Knocker’s fluid piano work – emulating, but independent of Ellington – and an outstanding drum solo by Dave McDonald.

Throughout his performances, both in the present case and in the past, Mr. Felten acts as both a performer and as an educator, regaling the audience with intriguing tales of the swing era to which he is devoted so passionately.  This year’s Felten July 4th performance, however, may have been unusually poignant. The music of World War II contains both elements of despair over lives lost, but also the joy of victory. In our present era, we mainly are seeing the loss, exacerbated even further by current sharp divisions in American society.

One hopes when Mr. Felten’s annual Independence Day show comes around again, some of these issues, too, will have been resolved and that the next show will once again take place before a live audience at Blues Alley just off of Wisconsin Avenue. As a World War II song of Vera Lynn has it, “We’ll meet again — don’t know where, don’t know when. But I know we’ll meet again some sunny day!”

“Songs of World War II” performed by the Eric Felten Quartet runs one-hour and seven-minutes. The concert may be streamed here.