News: 12 Classical Crossover Singers Record a Video That Gives Hope to All 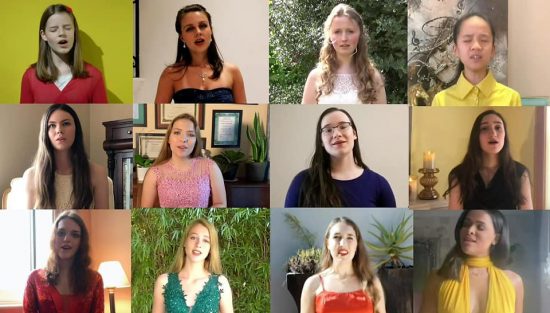 12 Classical Crossover singers from around the world, with different backgrounds, all united in a song of strength and hope.  “I Believe,” written by Eric Levi and famously performed by Andrea Bocelli and Katherine Jenkins, was a perfect piece for all 12 young perfomers, featuring each one in both solos, duo and trios. There was also a wide range of ages, from just 13 years old to 24 years old.  The young performers found unity, coming together in harmony and wish to spread hope to all who listen.

The song was originally performed by Andrea Bocelli and Katherine Jenkins, and it was composed by Eric Levi. Audio mixing by Jan Deeben. Strings by Hans Rusche. Video editing & production by Agne G. Song arranged by Agne G. Music project was initiated and coordinated by Anastasia Lee and Mireya Derksen.

MDTG: What was the inspiration behind the video?

Agne: I’m a member of the Instagram chat “CC/Opera Singers”, originally intiated by Mireya Derksen.  Several months ago, Anastasia and Mireya brought forth the idea of recording a song that would give people hope, strength,  and support during these uncertain quarantine times.

Anastasia Lee came up with the idea of singing the song “I Believe” from the recording by Andrea Bocelli and Katherine Jenkins. That’s a true crossover song, in which high and low harmonies fit very well.

MDTG:  How long did it take to produce?

Agne: We started with this project in April and had hoped to finish it in two or three weeks, but it became a three month project.  It was a lot more work than we thought it would be, and some singers dropped out due to private circumstances, or due to interferences with school, as most of us are students.  Therefore, we had to find a few new singers.

I have to give a lot of credit to Mireya for all of her hard work in organizing all of this.  She took care of mixing the audio recordings, sent all video files to me, and was the main communicator who sent out emails and instructions,  which proved to be a very difficult task, as all of the participants are located in different time zones.

MDTG: Tell me more about each artist.

Agne: These are the singers who joined the video project:

– Anastasia Lee:  USA, 23 year old billboard charting singer.  She has performed with Josh Groban, has been a special guest of Andrea Bocelli’s, and has nearly 10 Million Views on YouTube.

– Rose Mae:  USA, 22 year old versatile lyric soprano from Wisconsin.  Her powerful voice shines on the opera and musical theatre stages, and also in concert performances.   In addition to singing, she also plays several instruments and writes her own musical arrangements.

– Tatiana Marie:  USA, 21 year old lyric soprano who was included on Elvis’ European Christmas CD.  She and Anastasia Lee are sisters and they both have bachelors degrees.

– Faith Tucker:  United Kingdom, 19 year old Singer and piano player, and a “Britain’s Got Talent 2019” finalist.  She is currently studying music at the Royal College of Music in London.

– Lieneke van Eijkelenburg: The Netherlands, 19 year old singer.  When she was nine years old,  Lieneke performed “The First Noel” in Dutch during a Christmas celebration.  People were so amazed by her pure voice that it led her to many more performances.  Since then, she has collaborated with many highly talented musicians.

– Mireya Derksen: The Netherlands, 20 year old Mireya performed on the German TV show “Das Supertalent” in 2017,  and on the Dutch TV show “We Want More” in 2020.  She has released several songs on the social sites, like “Ticket To Mars”, and is now working on an album with “Tre Principesse.”

– Agne G: Lithuania/USA, 18 year old award winning recording artist from Chicago,  who has already performed at Carnegie Hall, NY and joined David Foster in concert at the Ravinia stage in IL.  She has toured the US and Europe,  and her latest Christmas album, “Merry Christmas from My Heart”, brought her the esteemed accolade of “Best New Teen Artist of The Year” award.

– Ekaterina Shelehova:  Canada, 24 year old winner of several vocal competitions. Graduated with both a Bachelor’s and a Master’s degree from the G. Verdi Conservatory in Milan, and has performed in “The Marriage of Figaro”, “Les Contes D’Hoffmann”, “Rusalka”, and “Don Giovanni”.  At the Toronto Conservatory of Music, she received three Gold medals for Voice and the diploma for Level 10 Vocal Performance.  She has also completed her piano studies and received the ARCT diploma in Piano Pedagogy.

– Ying-Shan Tseng:  South Africa, 17 year old singer and an award winning piano prodigy, who could breeze through Tchaikovsky and Mozart concertos from as early as age 8, despite being blind.

– Diana Marie Paunetto:  Sicily, Italy, 16 year old, is an international soprano soloist for the Diocese of Brooklyn, Queens and New York.  She has sung abroad in Sicily, at Saint Patrick’s Cathedral, and will be making her Carnegie Hall debut in March of 2021.