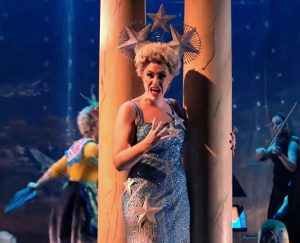 The Queen of the Night in a reconstruction of Mozart’s “The Magic Flute” in “Amadeus” at the National Theatre, London.

“How sad that Mozart, passionate as he was, keenly alive to all the beauties of the world, and full of the highest aspirations, never knew peace and contentment, in spite of all that he enjoyed and created in his short life,” we read in Eduard Mörike’s novella “Mozart on His Journey to Prague.”  “The reason is easily found in those weaknesses, apparently unconquerable, which were so large a part of his character. The man’s needs were many; his fondness for society extraordinarily great. Honored and sought by all the families of rank, he seldom refused an invitation to a fête or social gathering of any sort.”  Such weaknesses of the celebrated composer Wolfgang Amadeus Mozart are the focus of Peter Shaffer’s play “Amadeus,” now streaming in a production from the National Theatre in London. The performances are uniformly excellent and give an insight into Mozart’s troubled genius as well as offer a somewhat different take than the 1984 Academy Award-winning film adaptation.

By far the standout point of the ‘Amadeus’ production is a recreation of Mozart’s comic opera ‘The Magic Flute,’ which is produced in a delightful fashion…

The crux of the story, suggested by a work written by Alexander Pushkin, pits Mozart against his nemesis, Antonio Salieri. Salieri was a very popular court composer in Vienna during Mozart’s time, though he is now obscure and his works viewed as paragons not of genius but of mediocrity.  In the Shaffer play, the then-popular Salieri is the one person to realize his legacy will be completely overshadowed by Mozart’s. He thus hates Mozart for his stupendous talent, ever aiming to destroy the latter’s career and sabotage Mozart’s health and ultimately, if indirectly, take his life.

The National Theatre production is modernized in a number of ways and ironically in the production, Mozart talks about “modernizing opera.” The prologue, for instance, has actors sporting jean jackets and current styles in shirts. The instruments in the orchestra create quirky sound effects and occasionally play atonal music for effect, at times updating Mozart’s music with modern, pulsating rhythms. Salieri is even seen eating Krispy Kreme doughnuts in order to satisfy the now aged composer’s sweet tooth! Yet with all these changes and innovations, the play works, testifying to the universality of interest in the characters and in the play’s themes. The sets are formed together as the play proceeds. The props tend to be classical, with Ionic columns, a candelabra, and a harpsichord augmented by Rococo costumes and backdrops. Props are often the same, but lighting gives the illusion that there are changes from one locale to another. An especially evocative moment involving props and lighting occurs when Salieri’s soprano pupil sings during his monologue for dramatic effect.

Lucian Msamati as Salieri is very convincing, evoking moods of rage, deception, charm, and sympathy. Mozart is callow as is usual in an “Amadeus” production, but Adam Gillen also brings to the part a welcome frenetic energy. Karla Crome playing Constanze, Mozart’s wife, presents her as loving and relatable, being far removed from the pretensions of courtly life.

By far the standout point of the “Amadeus” production is a recreation of Mozart’s comic opera “The Magic Flute,” which is produced in a delightful fashion with whimsical costumes, strong voices, and a carnival-like atmosphere, with Mozart conducting and relishing the moment in the middle of the staging of his opera. This scene and the “Amadeus” production as a whole owe much to director Michael Longhurst and his ability to shift smoothly between moods, time periods, and theatre stylistics.

This production of “Amadeus” is so powerful the viewer must keep in mind this is drama, and not history.  There is little proof of a strong Mozart-Salieri rivalry, and the play’s idea that the Freemasons (whose symbolism was celebrated in Mozart’s opera “The Magic Flute”) were furious at him runs directly counter to all evidence.  Yet what is important in the play (other than strong performances and the opportunity to hear Mozart’s glorious music) is the problem of the eccentricity of genius and the envy this can engender.  “Amadeus” is warmly recommended for these reasons as well as the National Theatre production’s own strengths and as an interesting counterpart to the Hollywood film and more traditional productions.

Advisory: The BBFC age rating is 15 due to some strong language and moderate sex references.