Theatre Review: ‘You’re a Good Man, Charlie Brown,’ streaming from Out of the Box Theatrics 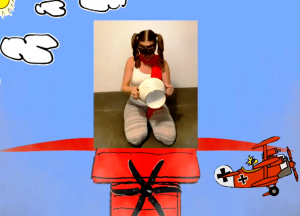 Snoopy as the World War I Flying Ace and Woodstock as the Red Baron in “You’re a Good Man, Charlie Brown.”

“Peanuts,” the classic comic strip featuring “good ol’ Charlie Brown,” spawned a 1967 musical “You’re a Good Man, Charlie Brown” with book, music, and lyrics by Clark Gesner. This musical version of a series of “Peanuts” vignettes has retained popularity ever since, even being adapted into a 1985 animated “Peanuts” television special. It comes to us again from Out of the Box Theatrics with all the joy that Charlie Brown himself experiences when his heart flutters out of excitement at seeing  the little red-headed girl — or with the joy with which Linus expects the Great Pumpkin to appear in the most sincere of all pumpkin patches.

“You’re a Good Man, Charlie Brown” … entertains and educates and thus will find favor with the “Peanuts” audience who grew up with the comic strip and educate young ones taking their small peanut-sized steps into real life…

“Peanuts,” of course, has become an indelible part of American culture.  Running in newspapers since 1950, the strip is still published in “Classic Peanuts” reruns today, long after the cartoonist Charles M. Schulz’ passing.  Many generations have now grown up with Snoopy, Charlie Brown,  Linus and Lucy Van Pelt, and other members of the “Peanuts” gang.

The show’s most charming memory might be the song “Happiness Is” sung cheerfully by the entire adult cast who portrays the children. The “Happiness Is” phrase was closely associated with the “Peanuts” comic strip at the time when “You’re a Good Man” came out, as Schulz had produced a “Peanuts” collection in the 1960s called “Happiness Is a Warm Puppy.” This brings up another point about how this musical is fixed in its time and what to expect in the show. Some characters in “Peanuts” such as Marcie, Franklin, and Snoopy’s brother Spike do not appear, as the 1967 play predates their entry into the newspaper strip.

Very creative backgrounds are used in this production, such as in the famous running sequence in which Lucy is in her psychiatrist’s booth being visited by Charlie Brown — “Psychiatric Help for 5 cents.” This is given a modern addition by having a social-media handle @LucyVanPelt on the sign, but the scene is also an excellent instance in which this production balances the comic strip animated backgrounds with live adults performing the action and singing the musical numbers. Perhaps the best scene mixing live action and Schulz-style cartoon portions features the beagle Snoopy as the World War I Flying Ace in his doghouse fighting the Red Baron in the sky. The Red Baron portrayed in this instance by Snoopy’s bird friend, Woodstock. Woodstock is animated, whereas Snoopy is portrayed in a lively fashion by actress Tina Scariano.

The songs are performed to simple but effective piano accompaniment. Liz Flemming, who plays Lucy, sings lyrics comically while Schroeder performs  “Moonlight Sonata.” As Charlie Brown explains life problems to Lucy during the number, “The Doctor Is In,” Alaina Mills as Charlie Brown sings appropriately with a humorous “good grief” depressed air. Digital props —such as Schroeder’s toy piano familiar to viewers of the television “Peanuts” specials — are used. Schroeder, played energetically by Ira Kramer, shows devotion to his favorite composer Beethoven during the piece “Beethoven Day,” while sampling Beethoven’s “5th Symphony” harmoniously with the cast and ending the song with another one of Beethoven’s compositions, “Hymn to Joy.” Schroeder is “stubborn or misanthropic,” just as Beethoven was described in his lifetime.

The production has much of the digital social distancing look which is becoming increasingly familiar to viewers of streaming theatre in the current pandemic, with actors and actresses in different locations. But here, the designers of the production have turned this to an advantage by mixing the characters with animated sets, as noted above. Low-tech but efficient costumes are used, such as Charlie Brown wearing his trademark yellow shirt with a zig-zag black pattern, Lucy wearing a blue dress, and Schroeder wearing a colorfully striped shirt. Snoopy’s red dog house is presented via animation. Sound effects were used effectively, as an adult muffled voice is heard during a classroom scene — another familiar element from the “Peanuts” animated special.

“You’re a Good Man, Charlie Brown” in this Out of the Box Theatrics’ production entertains and educates and thus will find favor with the “Peanuts” audience who grew up with the comic strip. It will also educate young ones, taking their small peanut-sized steps into real life, as when Schroeder offers words of wisdom to the coquettish but bullying Lucy: ”I think Socrates was very right when he said that one of the first lessons in life is ‘know thyself.’” Whether the viewer first encountered “Peanuts” through the comic pages, holiday TV specials, or school lunch boxes with  Snoopy designs, this production — especially with its use of actual images from the  original animation — will bring back fond memories of good ol’ Charlie Brown and the gang.

“You’re a Good Man, Charlie Brown” live streams through July 29 (7:15 p.m.) from Out of the Box Theatrics. For tickets and more information, click here.