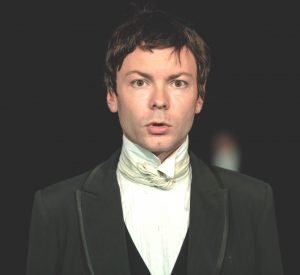 Photo by Marc Chalifoux of the play “Edgar Allan,” courtesy of The Coldharts.

For the past year, the National Edgar Allan Poe Theatre on the Air has been creating brief, monthly audio plays based on the stories of  Edgar Allan Poe. Each audio play frames the story as a conversation between the dubious Dr. Maillard and a sanitarium patient and then transitions into the play itself. This month’s offering, “Edgar Allan,” goes in a different direction. Here, a fictionalized version of the young Edgar Allan Poe is the central character in a story based on Poe’s famous tale, “William Wilson.”

Edgar is a difficult young man — intense, highly competitive, a prodigy, and friendless, though he tries to wear it as a badge of honor. He is surprised and yet dismayed to discover an equally talented person sharing his first and last name at his school. After a few comical misunderstandings, they form a guarded friendship. In true Edgar Allan Poe style, the longer the story goes, the more uncertainties face the audience. Exactly how reliable is the narrator of the story? Has the narrator at last found a worthy friend, or is something else taking place in this Doppelgänger-themed tale? Will the story fully follow the plot of “William Wilson,” in which the narrator commits an “unpardonable crime?”

Whereas previous National Edgar Allan Poe Theatre on the Air outings have  relied heavily on the creative work of the theatre’s founder and artistic director, Alex Zavistovich, here the artistic heavy lifting is executed by Katie Hartman and Nick Ryan, a.k.a. the Coldharts, who created and perform the show over two episodes. The Coldharts have cleverly merged the life of young Edgar Allan with the “William Wilson” tale, in which the narrator is enrolled in a British boarding school — an event which parallels those that actually happened to the real Poe. In this instance, the “very excitable” young Edgar Allan meets his double who, like the Doppelgänger of “William Wilson,” has a malady which prevents him “from raising his voice at any time above a very low whisper.”

Katie Hartman plays the school-aged Edgar Allan with a manic intensity, which contrasts well with Nick Ryan’s infinitely more measured character of the same name. Both are excellent in their roles. Ms. Hartman conveys a sense of immediacy which makes young Edgar “the prodigy” come alive, while Mr. Ryan’s necessarily more distant Edgar “the-quiet” is believable as well. In addition, there are unexpected musical elements — a musical prologue, sung by the Hartman incarnation of Edgar Allan, provides backstory. Brief sung segments, interspersed with the story, provide additional emotional color and intensity in an unusual, but interesting, style.

Even more compelling is the strength and simultaneous sparseness of the production. Like classic Shakespeare, the setting is created through words and vocal expression rather than with elaborate props and sets. The duo is able to convincingly portray scenes taking place in a classroom, a library, and other locations using only two voices and the simplest of sound effects.

Wit comes into play as among the schoolmates of the two Edgar Allans are the “Wilson brothers,” another tribute to the “William Wilson” Doppelgänger tale which is the kernel of this play. A very fun part of the performance occurs when the twin Edgar Allans decide they can no longer go on with the same name. They take on the appellations  “Noctua” (owl) and “Corvus” (crow) and form a private “Hallowed Order of Aves” to do so in secrecy and solemnity. Here and elsewhere, the show documents Poe’s success as a school prodigy and his interest in Latin which manifests itself in the many Latin phrases in his tales.

The audio production is based on an award-winning stage production by the Coldharts and this appears to be their first audio drama. “Edgar Allan” translates remarkably well into an audio-only format. As with other Poe Theatre on the Air productions, there are also occasional nods to other Poe works such as “The Raven” and “The Cask of Amontillado.”  The songs used in the play — “Everything Fun Is a Little Bit Dangerous” and “Why is the Night So Dark?” — are inspired by “The Imp of the Perverse” and “Eureka” respectively.

The notion of the Doppelgänger is widespread in both English and German literature. Encountering one’s own Doppelgänger usually signifies something unnatural or prefigures misfortune. It would be an even greater misfortune to miss this interesting audio show. “Edgar Allan,” which was performed on stage in Maryland last October at Poe’s Magic Theatre in the Lord Baltimore Hotel, is a musical and yet macabre view of Poe’s formative years. Part One is available for listening now on an NPR stream and Part Two will be aired in September. We eagerly await the return of Mr. Zavistovich and series regulars for a new miniseries in October — a serialization of Poe’s C. Auguste Dupin detective stories.

Each episode of “Edgar Allan” runs approximately 23 minutes. Part One (and previous productions of the Edgar Allan Poe National Theatre on the Air) may be heard now here.