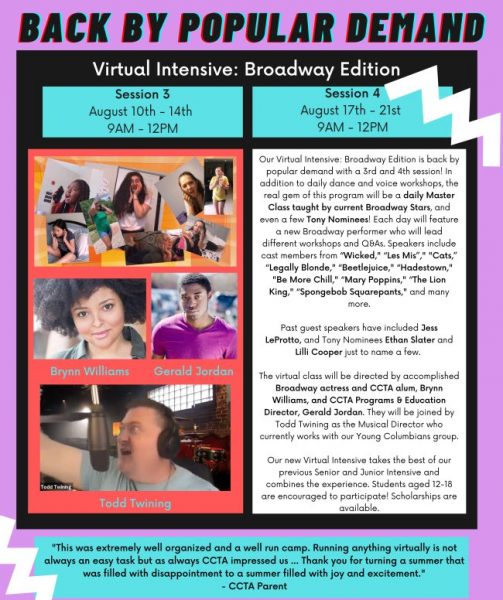 It’s no secret that Toby Orenstein has a pipeline to Broadway and Hollywood, direct from her Toby’s Dinner Theater and, especially, from her Columbia Center for Theatrical Arts (CCTA) where it all started for so many performers.
When “Mama Bear” (Orenstein) calls upon the long list of her proteges who have gone on to professional careers, the response is immediate and positive.
“Nobody says ‘No’ to Toby,” chuckled Gerald Jordan, co-director for Intensive Broadway edition of the CCTA summer camps, in a recent telephone conversation. “During this difficult time, we want to keep the arts alive and give kids a positive feel for being onstage even if they are not there physically.”
“We’ve always looked to theater for inspiration, learning a little bit of ourselves,” he continued, “and even without performing on a stage, they still take away this same feeling as if they were physically together.”
Brynn Williams, who has a long list of Broadway shows under her belt, agrees with her co-director. “I started my professional career at Toby’s as a princess in ‘The King and I’ and enjoyed my time as a Young Columbian. “It’s especially rewarding to work with new talent that pop up at these camps.”
Both Gerald and Brynn grew up in Howard County and share a passion kids and camps – even this virtual one. They give a nod to longtime camp choreographer/director Kassidy Sharp. “Her enthusiasm and talent keep these campers singing and dancing and telling their stories in their own way.”
“It was Jim Rouse’s dream to start a performing arts school in early Columbia,” recalls Toby Orenstein with a smile that could light up her dinner theater. “I was part of that dream…he would be so proud to see so many successful actors who trained at our school and summer camps.”
Pre-Covid 19, each summer, Toby’s Teen Professional Theatre brought together a group of teenagers chosen at auditions for roles in a musical overseen by stage professionals and performers with experience with that show.
Obviously not happening this season!
Instead, the  CCTA camps are offering master classes with Broadway stars who are anxious to share their talent, a bonus, indeed. This was especially successful in the first two sessions when the kids got to train with pros like Gavin Lee, an English actor who has appeared on the stage in musical theatre, notably as Bert in the musical “Mary Poppins” and as Squidward Tentacles in the original Broadway cast of  “SpongeBob Squarepants: The Musical.”
Gerald was concerned with how they could enhance the camps, so he turned to his friends in Manhattan and thought the East Coast. “We tried to make the Broadway actors available for the camps, and Broadway was on hiatus. It worked out wonderfully.” He pointed out that singers and dancers from shows like “Wicked” and “Newsies” took part in the first two summer camps, and the kids learned the parts of “The Telephone Hour,” one of the highlights of the musical “Bye-Bye Birdie.”
“It was a true Broadway experience we were providing,” said Brynn with more than a hint of pride for her teenagers who performed this particular scene with such professionalism. “Kassidy taught them to write their own scripts and memories,” a special part of the production.
“What could we do different for the next sessions?” Brynn challenged the CCTA staff. “The only limit is space to perform,” she said, “but as long as we can see them and their upper body work, the Zoom call captures enough so we can work with it.”
So what’s the buzz for the next CCTA Camp session beginning next week? “More Broadway stars,” and lots of surprises,” said Jordan who began his theater career at Glenelg High School under the mentorship of Sue Miller and her daughter Beth. “They dragged me to auditions…but I’ll be forever grateful.”
“We’ve added more sessions because of the demand,” he continued. “For the finale, all of the video submissions are edited, the voices blended, and they get to see each other, something not possible onstage.”
Visit www.cctarts.org for details on the next camp session which begins Monday, Aug. 10.