Concert Review: ‘Ballroom Dancing at Home’ with Joe Enroughty and his Mellotones, streaming on Facebook 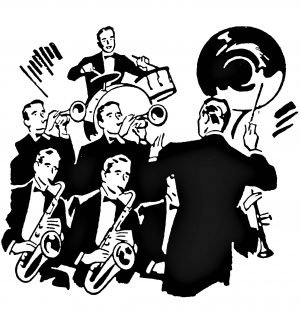 Cover image from the “Sentimental Journey” compact disc of the Royal Virginians, one of two dance orchestras led by bandleader Joe Enroughty.

Bandleader Joe Enroughty is known for leading two swing bands in the Virginia region. As suggested by the band’s name, his fourteen-piece Royal Virginians perform and promote the sweet-swing style of ballroom music embodied by Guy Lombardo and his Royal Canadians between the 1920s and the 1970s. Joe Enroughty and his Mellotones is a smaller, seven-piece group which also performs American popular music standards.

On the afternoon of Sunday, August 9, the spotlight was on the Mellotones, with Mr. Enroughty conducting as usual. What was unusual was that the dance music event took place not in Richmond’s beautiful Acca Shrine ballroom or a similar elegant dance venue in which the Enroughty musical aggregations have played, but outdoors, away from dancers and a live audience due to the need for social distancing in our COVID-19 era. The intrepid group, which included two saxophonists, a trombonist, a trumpeter, a drummer, a bassist, and a pianist, all keeping at least six feet distance between them, performed out-of-doors at a location in the Staunton, Virginia area.

Those who were ‘Ballroom Dancing at Home’…surely did not miss a beat, as the foxtrot, waltz, and Latin-dance rhythms continued smoothly and unabated…

Many of the songs were of a Broadway nature, including the title songs of “Mame” and “Cabaret,” as well as “This Can’t Be Love” from “The Boys from Syracuse” and “Who Can I Turn to?” from “The Roar of the Greasepaint – The Smell of the Crowd.”  “Cabaret” particularly lent itself to the small group and vintage orchestration, bringing back memories of a cabaret pit band in live productions of the acclaimed musical set in the Weimar Republic of Germany in the 1920s.

While the dance-band style of Guy Lombardo generally requires a full orchestra, several of the Mellotone band’s numbers captured the Royal Canadians’ signature sweet, vibrato reed sound of a past era. This was due to the talents of alto saxophonist, Allen Cole, and tenor saxophonist, Paul Beum, especially heard to advantage in “Dancing in the Dark,” the Herb Alpert classic version of “Lollipops and Roses,” and a waltz version of “Tenderly” — the latter recorded by Lombardo himself in three-quarter time on his album, “The Sweetest Waltzes This Side of Heaven.” “New York, New York” is now regularly played on New Year’s Eve programs from Times Square, and the Mellotones’ Lombardo-style version (augmented with just a touch of Dixieland) recalls that Guy Lombardo’s music was once synonymous with New Year’s Eve via national radio and television broadcasts from New York City.

It was not the archetypical, sweet-band music sound for the entire concert, however. The ensemble also played a few somewhat improvisational turns in popular pieces, most notably “Lara’s Theme” (sometimes known as “Somewhere, My Love”) from the film “Dr. Zhivago.” This provided an interesting contrast to the more traditionally-scored numbers. Those who were “Ballroom Dancing at Home,” as the concert was billed, surely did not miss a beat, as the foxtrot, waltz, and Latin-dance rhythms continued smoothly and unabated, no matter the style or song.

While no vocalists joined the Mellotones during the performance, the band played tributes to legendary popular singers in instrumental renditions of some of their hits:  Tony Bennett’s “The Good Life” and “I Left My Heart in San Francisco,” as well as Nat King Cole’s “Unforgettable,” “Too Young,” and “Mona Lisa.” “Mona Lisa” featured a charming, music box-style solo by Jasmine Pitt on her electric piano. There was also a tribute to the “King of Swing,” Benny Goodman, in the showpiece, “Don’t Be That Way,” played in tribute to the Goodman style and featuring Glen Boswick on bass.  Mr. Boswick leads his own orchestra called the Sound of Swing, often performing in Virginia’s Tidewater region. This group has often joined forces with Joe Enroughty and his Royal Virginians in double-billings at the annual Richmond Big Band Weekend.

Those who would like to hear the more traditional big band sound of the Royal Virginians during the current pandemic may do so via the orchestra’s “Sentimental Journey” compact disc. Standout pieces in this recording of both studio and live performances include the title song (made famous by Doris Day), “Star Dust” (in an arrangement patterned after the orchestra of Lombardo’s sweet-style competitor Jan Garber), the Latin-styled “Breeze and I” (from Ernesto Lecuona’s “Andalucía Suite”),  and — uncharacteristically for a sweet band — a rollicking version of Bill Haley’s “Rock Around the Clock.”  How pleasant on a lazy, August afternoon to listen and dance at home to these memories once again!