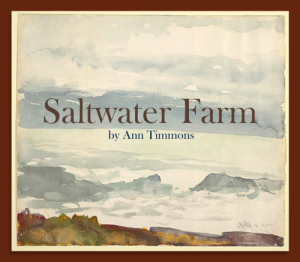 . . . there was enough tension, mystery, and undercurrents to promise more fireworks in Act Two . . .

And it can be fun — if for no other reason than thinking, “glad I’m not there.” Sometimes being a fly on the wall is the enviable position, and I was glad to be the fly on this wall.

Playwright Ann Timmons presented Act One this past Tuesday and next Tuesday (September 1, 2020), Act Two is available for viewing. She has created a family in crisis — or rather a family just coming to realize they are on the cusp of major changes — and that fits in with her overall stated interest in questions of progress.

The family members, sisters Rebecca (Katherine Stafford) and Christine (Marni Penning), are the co-owners of the Demming family properties, including an estate near the Maine coast, called Saltwater Farm. Becca’s daughter, Peggy (Robin Covington), and Christa’s son, Phillip (Stephen Strosnider), are at the farm to receive the handing over of the estate. Christa and Phillip have flown in from Paris, where they have lived for the past 15 years. Also present is Agnes (Caren Anton), a long-time family retainer.

To a certain extent in Act One, the majority of the characters represent recognizable archetypes. Becca lives at Saltwater Farm at least a few months of the year and treasures the sense of heritage and stepping out of time. Christine, who is younger, is more adventurous and has wanderlust (she married a count or a duke and they live in Paris). Phillip represents a type of younger generation that is a little louche, quite entitled, and who has never, as cousin Peggy says, “accomplished anything.” Peggy is a lawyer  — single, brittle, and sarcastic (also funny and eagle-eyed) — who is raising the alarm about the family’s mid- and long-term financial prospects.

This is a family that doesn’t really trust each other. Both Phillip and Peggy have plans for the properties/inheritance, but won’t divulge them, at least not to each other. That could be problematic because they will be the co-trustees and must work together.

The actors did a nice job with their parts. In particular, Covington managed to convey something simmering beneath the surface of her Peggy. She’s brittle and defensive for a reason. The housekeeper, Agnes, has some unexpected power over the sisters, and to a lesser degree, the cousins. Anton gives a nice rendering of a down-to-earth woman who knows many of the family secrets. While she doesn’t abuse that knowledge, she can put steel into her voice.

“Saltwater Farm” is directed by Catherine Tripp with stage directions read by Nicole Burton. Pipeline Playwrights is a “collective of women playwrights who support, promote, and present the work of women playwrights.” MetroStage and producing artistic director, Carolyn Griffin, was their partner in this endeavor.

Act One moved along at a nice pace and while it only lasted about 40 minutes, there was enough tension, mystery, and undercurrents to promise more fireworks in Act Two as this family teeters on a brink. They can slide into genteel poverty and further hostility, or find a path forward. I’m looking forward to seeing the resolution next week. So far, I’m on Team Peggy to pull them through.