Audio Review: ‘The Flying Dutchman’ on ‘Doctor Who’ at Big Finish Audio 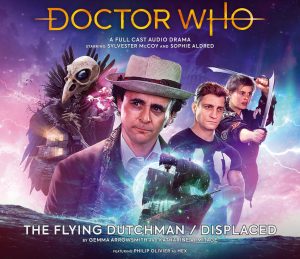 After having taken on the playwrights Aristophanes and Shakespeare, the Big Finish “Doctor Who” audio series turns its attention to “The Flying Dutchman” of Wagner fame.

In a series of Big Finish audio adventures of the legendary Time Lord “Doctor Who,” classic theatre sometimes comes to the fore. So was it in “The Mask of Tragedy,” which found the Doctor with his companions in Athens in 421 B.C. in the company of the ancient Greek playwright, Aristophanes, whose comedies are still performed and studied today. In “The Time of the Daleks,” the Doctor and other admirers of Shakespeare ruminate on going back in time to witness the first production of the bard’s “Julius Caesar.” Now Big Finish has just released an adventure focused on another literary trope, “The Flying Dutchman,” known to opera audiences through Richard Wagner’s tragic work in which a sea captain is doomed to sail the oceans until redeemed by the love of a woman “faithful unto death.” This magnificent audio version of “The Flying Dutchman” tale recasts the story not in Wagnerian but in Whovian terms.

In this episode, written by Gemma Arrowsmith and directed by Samuel Clemons, the seventh Doctor has exited the Tardis with his companions Hex and Ace and finds himself on the deck of the ship Isabella in 1742 as the crew is haunted by the Flying Dutchman, a glowing spectral ship travelling alongside it on the open seas. Unfortunately for our three adventurers, the crew is equally spooked by the mysterious arrival of Doctor Who and his friends. Yet is it really a supernatural ghost ship and crew, or is there a more earthly explanation as the Doctor suggests to his companions and the captain of the Isabella?

This magnificent audio version of “The Flying Dutchman” tale recasts the story not in Wagnerian but in Whovian terms.

Sylvester McCoy (a veteran of the long-running television series) makes for a witty and skeptical Doctor Who as he reprises his part for audiophiles. Nicholas Khan as Alexander Marfleet, the Isabella’s captain, gives a highly effective performance as he transitions from insecurity about leading the ship (which had once been commanded by his father), to full confidence as a captain in both name and spirit. Another effective scene features Ace (played with authority by Sophie Aldred) in conversation with a cabin boy, who is actually a young woman masquerading as a boy (an energetic Carly Day as Archie/Anna), in which she steers the fifteen-year-old to proclaim to the world who she really is.

While the name of both ship and episode are drawn from German opera, the show draws more from British Romantic poet, Samuel Taylor Coleridge, and his narrative poem “The Rime of the Ancient Mariner,” which also includes an encounter between a ghost ship and a human-crewed vessel. Indeed, Doctor Who himself quotes the Ancient Mariner’s famous “water, water everywhere” lines early in the show. Towards the conclusion, there is reference to Coleridge’s end to the poem about becoming “sadder but wiser.” The episode also features an extended musical prologue to the episode, but electronic and not Wagnerian in nature — or did we not hear a few minor-key chords of a leitmotif from “Der fliegende Holländer” lurking discordantly beneath the digital waves?

Those ordering this superb “Flying Dutchman” also receive a second, new “Doctor Who” episode, “Displaced.” This story, written by Katharine Armitage, involves a different sort of encounter with the unknown. In an abandoned, sealed house an entity, perhaps an alien presence, attempts to communicate with Doctor Who, Hex, and Ace. To say more would take too much of the mystery away from the plot. Suffice it to say that the human element is strong in this episode as well. As Philip Oliver (in an understated performance as Hex) states: “I like people. Don’t get me wrong.  I love a good alien planet, but people…they have so much locked up inside of them, and you never get to the bottom of it at all;  you never solve people.” In this episode, there are also delightfully subtle romantic undertones revealed in the relationship between Hex and Ace.

Running time: The combined productions and added features run a total of 146 minutes.

To order “The Flying Dutchman” and “Displaced” (plus audio interviews with cast members), please visit here.