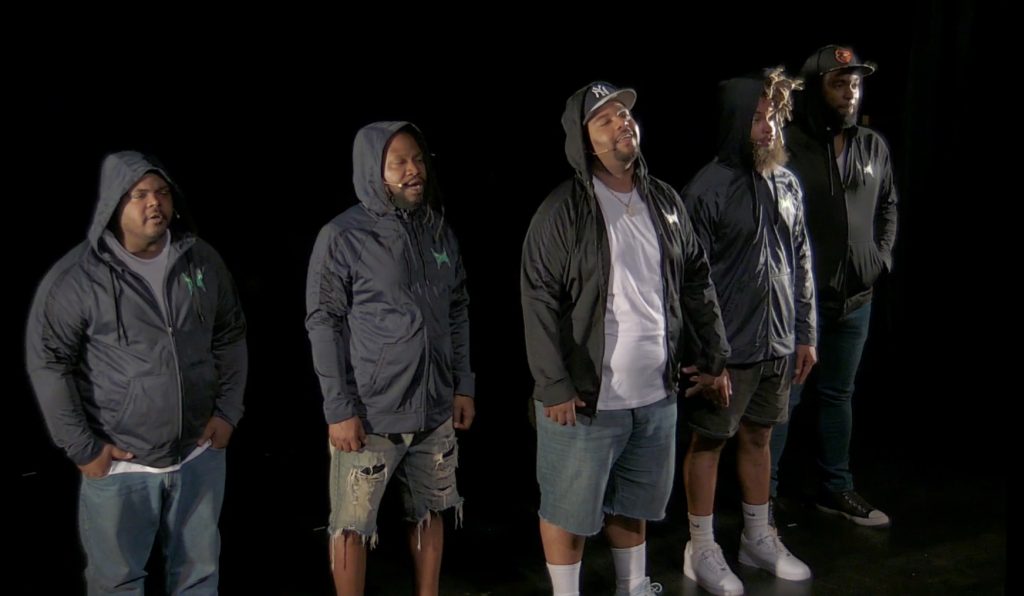 Conceived, produced, and directed by Troy Burton, “A Real “N***a” Show” is a “choreopoem” performed by an all-male cast which tells stories about the experiences of Black men in Baltimore and beyond. An ensemble of five wonderful actors combines spoken-word, movement, short scenes, and monologues into a powerful exploration of the meaning of a single, unutterable word — or, two, actually: “…er” and the “deracialized” “…a” are vividly contrasted while characters ponder “to use, or not to use, the word.”

This presentation very pointedly does NOT feel like a play reimagined for online consumption — it’s highly theatrical, personal, and immediate.

Writing credit for the show is by its cast, along with Burton, Anthony Brockenbrough, Sheila Gaskins, Malik Maloney, Melvin T. Russell, and jaki-terry. That’s a LOT of authors, whose individual voices blend extremely well. Choreography by Lori Goodman and Tracie Jiggetts stirs the action while most of the evening’s rich theatricality comes in monologue form. In “A Son Apart,” Brandan Tate delivers a pained confrontation between a man and his father — the latter represented by an empty chair. Eze Jackson’s “The Poison” and Robert Lee Hardy’s “The Mad Man” are just two more of 30-odd dazzling performances in the piece.

As adapted to pandemic conditions, the current production of Burton’s show is streamed online. The performance is from the Theatre Project stage, which has been a frequent venue employed by Burton for prior versions of the play. If there’s a sense of lost luster from an audience’s perspective, or if the performers themselves feel the void of 157 unoccupied seats before them, it doesn’t detract. This presentation very pointedly does NOT feel like a play reimagined for online consumption — it’s highly theatrical, personal, and immediate.

Mostly live and some prerecorded content (with occasionally choppy editing) are brought together through a standard three-camera setup plus sound and lighting effects that remind one of how deeply we’ve missed the theater these past five months. The actors are unmasked in the performance, though Burton reports that great care was taken to ensure their safety. “The performers and crew were required to wear masks during rehearsals and I personally took the temperatures as each person entered the rehearsal space. Some of the group scenes were blocked to maintain social distancing on the stage. The actors all agreed to self quarantine two week before the performance other than rehearsals. We modeled most of this structure based on Tyler Perry reopening his studio.” 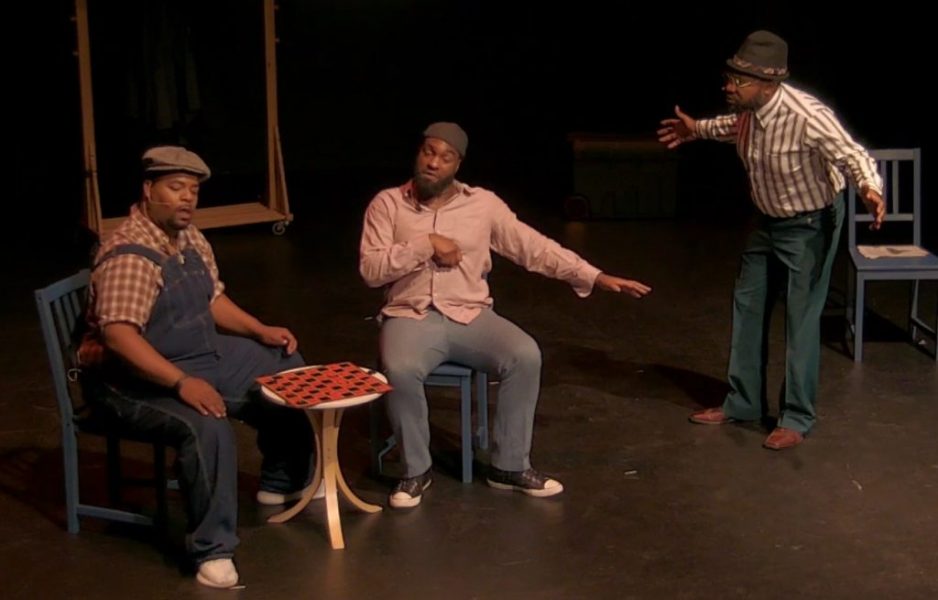 A final word as a white audience member. Some of the material in this play lands with an kind of “outsider-ey” feeling, almost like eavesdropping. Many of these words are things that Black folk say to each other, about each other, about themselves, and some of that might be uncomfortable to some of us. From our perspective, that in itself might be the most compelling reason to see Burton’s piece. The discomfort belongs, and needs to be dealt with — the purchase of a ticket does not grant one an invitation to the barbecue, nor should it. And by the way, some of the messages of this play are directed to us, to those of us who “never took the time to bridge this gap of untruths with real truths.”

Advisories: Profanity and simulated drug use.