Theatre Review: ‘Othello, the Moor of Venice’ by the American Shakespeare Center 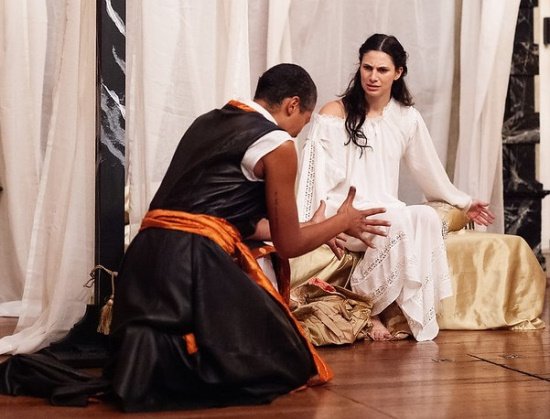 The United States is now engaged in a reexamination of the role that race has played, and continues to play, in American society. The American Shakespeare Center and Blackfriars Playhouse of Staunton, Virginia have taken this opportunity to perform one of Shakespeare’s most challenging works, “Othello, the Moor of Venice,” to help us reflect upon these themes, providing a cautionary story showing how persons of bad intent can use “outsider-hood” as a weapon to destroy both the noble and the pure, whether in the Shakespearean past or the American present.

…the show is as much concerned with character as it is with social concerns, past and present.

Othello is a Moor, now generally understood to be a dark-skinned North African Muslim. Unexpectedly, he serves as a general on the side of the Venetians against the Ottomans, who are Muslim also. Othello is married to Desdemona, the daughter of a Venetian senator. She has eloped with Othello against her father’s wishes. Othello’s duplicitous ensign, Iago, passed over for a sorely-wanted promotion, now plots against Othello, convincing him that Othello’s beloved Desdemona is in fact having an affair with Othello’s trustworthy officer, Michael Cassio.

The acting ranges between excellent and outstanding. Mia Wurgath beautifully conveys the purity and sincerity of the tragic Desdemona, while John Harrell, as Iago, exudes a duplicity only occasionally leavened by flashes of the darkest humor. Brandon Carter is also engaging as Michael Cassio. Most remarkable, however, is the portrayal of Othello by Jessika D. Williams. Early in the play, Williams wonderfully transmits the stereotypical bravado of Othello-the-general and later, as Othello-the-deceived, as she conveys a raw and tragic pathos that transcends gender boundaries.

Blackfriars’ productions use minimalist props. COVID-19, however, demands that masks be worn as much as possible, even in stage productions. This production turns this necessity into a virtue, with the COVID masks acting as both costume and prop. Iago carries a lit torch in the beginning — while also wearing a mask, effectively conveying the hidden nature of his motives. In another scene, several characters wear masks at first, but as the other actors depart the stage, the masks are removed, again revealing hidden natures. It is as if social distancing and masks are issues within the world of the play itself.

While there are a number of experimental aspects to the production, the costuming by Victoria Depew, is both traditional and brilliant. The depraved Roderigo (played by Zoe Spes in another gender switch) is magnificently garbed with plumed hat — a costume both masking and accentuating his sensual and corrupt nature. Desdemona is superbly dressed in Renaissance attire, and Othello and the officers are resplendent in their military garb with detailed decorations and flourishes. Interestingly, Cassio and Iago are dressed in identical military uniforms, but Iago with a black sash and Cassio with a white one — reflecting, perhaps, their very different natures.

Minimalist props are effective, with simple tapers used to good effect to suggest regal halls and palatial buildings. The staging is also compelling. A particularly effective scene (Act I, scene 2) places Desdemona in the unenviable position of having to defend “a divided duty” between father and husband. She is in the center of the stage at the moment, whereas Othello is on one end of the stage and her father, Brabantio (played to great paternal effect by Matthew Radford Davies), is at the other — a visual embodiment of their divided states. Sheets, curtains, and columns simulate Desdemona’s bed chamber well at the moment in which Othello enters with death on his mind in the play’s most dramatic scene. Above all, Blackfriars’ universal lighting illuminating stage and audience with candle-like lighting ironically adds a feeling of night and darkness to the proceedings.

“Othello” is directed superbly by Ethan McSweeny. The production expertly balances the timely and the timeless in that the show is as much concerned with character as it is with social concerns, past and present. It does this by not only highlighting issues such as racism and betrayal, but also by showing how very human personal flaws, such as Othello’s “green-eyed monster” jealousy or his mediocre ability to judge character, can magnify the ability of others to bring about the downfall of noble, but imperfect, people. Blackfriars’ casting across gender roles (mirroring and modernizing the Elizabethan-era custom of using males for all roles, regardless of character gender) also serves to highlight the universality of the play’s themes.

Audiences can experience “Othello” in one of several formats: live in Blackfriars’ Elizabethan-style theatre (with masks and social distancing) in Staunton, Virginia, in an outside venue on the lawn of the Blackburn Inn, and streaming by video from the theatre. This production is strongly recommended. It brings out the play’s themes and contrasts extraordinarily well, and the instances of cross-gender casting productively challenge some of the set expectations of viewers already familiar with the play. The show runs live through October 18, and is available through online streaming through September 14.

“Othello, the Moor of Venice” runs through October 18, 2020. For more information, click here.