Audio Review: ‘A Midnight Dreary: All Things Heard in the Heavens and the Earth’ by We Happy Few 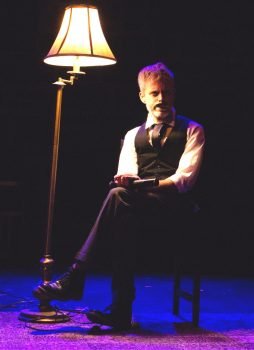 “I heard all things in the heaven and in the earth,” intones Jon Reynolds in his narration of ‘The Tell-Tale Heart,’ one of several tales featured in We Happy Few’s production of Poe works.

In both story and verse, Edgar Allan Poe tried to connect thoughts with sounds or, as he himself put it in “The Rationale of Verse,” “the very germ of a thought seeking satisfaction in equality of sound.” We Happy Few, a small acting troupe based in the Capitol Hill region of Washington, D.C., takes this notion and runs with it in their audio production, “A Midnight Dreary: All Things Heard in the Heavens and the Earth.” Sound effects artistry is the co-star in this production of some of Poe’s most famous works, creating a feast for both the ear and the mind’s eye.

… a tactile experience … ‘A Midnight Dreary’ is perhaps the only audio drama which attempts to appeal … to all five of the senses.

In “The Masque of the Red Death,” for instance, audio images of clock towers, ballet music, unhinged laughter, and crowd noises resound that they may bring to life the masquerade ball held by Prince Prospero — an event taking place in social isolation with his courtiers while the surrounding countryside suffers from the plague of the Red Death. In this and the rest of the works presented in this two-episode mini-series, the original words of Poe are used.They are not adapted or modernized. Rather, it is the use of sound which provides the entry point to the spoken words, underscoring Poe’s meanings when his mid-1800’s turns of phrase may not. This creates a true “equality of sound” and thought. However, this sound design is also brought to life by the gifted performers, including Desirée Chapelle as both Prince Prospero and the omniscient narrator of the tale.  The connections between Poe’s day and our own are also highlighted in the “The Mystical Digest and Penny-Saver” that was distributed with the review copy of the show this reviewer received. Prince Prospero “throw[s] a staggeringly tasteless (and gaudy) party to celebrate the plague ravishing his nation…” The production thus raises the very timely question as to whether one can socially isolate oneself and ignore social concerns during a pandemic.

Another Poe classic, “The Cask of Amontillado,” features the cunning character of Montresor, who lures his unsuspecting enemy Fortunato on a fateful search for a prized barrel of wine. Sound effects again play a crucial role in the telling of the story. We Happy Few recommends, in fact, a “sounding system with high-quality, stereo sound.” (You will want to be in your home in any case, in order to spread out the included party favors.)  Artistic director, Kerry McGee, also plays Montresor as a female character, with Alex Turner as  Fortunato. The dialogue is sparkling, with the actors sharing a wonderful, if unexpected, chemistry.

A more traditional performance is to be found in Jon Reynolds’ narration of “The Tell-Tale Heart,” another famous murder tale which is done somewhat in the style of readings performed by celebrated actors such as Vincent Price and Basil Rathbone on long-playing records. Dylan J. Fleming is the narrator for the final piece, “The Premature Burial.” This story of being interred while yet alive has been dramatized several times in radio and film productions before, often taking liberties with the text. As in the other performances in this series, this rendition is faithful to Poe’s intended story, with the “macabre mayhem” (to borrow a phrase from series hostess Paige O’Malley’s introduction) abetted by the sound design as well as by Mr. Fleming’s riveting performance which showcases his talent admirably.

In addition to the tales, this production features Poe poems such as “Alone,” “Eldorado,” and “The Bells,” which are read to the accompaniment to atmospheric piano music. “The Bells,” however, is performed in a somewhat abridged form.

An optional box of surprises can be ordered as well, and this should be opened just before listening, as it makes the show a more tactile experience. By putting on a black silk mask, you, too, can join the party of Prince Prospero in “The Masque of the Red Death.” An included invitation to the festivities from Prince Prospero himself encourages one to “bring a mask, but leave all worries of the Red Death behind.” Then there is Amontillado Cider to brew and imbibe of while enjoying Poe’s tale of the “Cask”… Other surprises are included as well, but to reveal much more about these gifts might diminish the experience. Suffice it to say that “A Midnight Dreary” is perhaps the only audio drama which attempts to appeal quite so literally to all five of the senses.

The coterie of We Happy Few is planning a further audio mystery on November 23, this time featuring lady detective, Loveday Brooke — a largely forgotten heroine of Victorian detective fiction — in “The Mystery of the Drawn Daggers.” The producers of this show are at this very moment working to bring that story to life, again, with compelling period sound effects and a box full of enchanting artifacts. Another upcoming production is the Sherlock Holmes’ mystery, “The Adventures of the Dancing Men.”

Taken together, the two parts of “A Midnight Dreary: All Things Heard in the Heavens and the Earth” run 80 minutes. The productions and the optional boxes of surprises can be ordered here.