Audio Review: ‘Never Bet the Devil Your Head’ by Poe Theatre on the Air 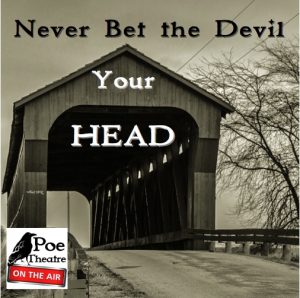 “Romantic poetry is a progressive universal poetry. Its mission is […to] fill and saturate the forms of art with sterling material of every kind, and inspire them with the vibrations of humor.” So wrote the German Romantic critic Friedrich Schlegel in his Athenæum Fragments. Edgar Allan Poe was of the same spirit, for he also understood “universal poetry” — that is, poetry as well as literature in general — to be all-encompassing. Poe infused poetic and prose forms of his Romanticism with occasional bursts of humor. A sterling example of the witty Poe is showcased in “Never Bet the Devil Your Head” by the National Edgar Allan Poe Theatre on the Air on WYPR, Baltimore (also available for listening in two parts as an NPR podcast).

…the show and its timing highlight how Edgar Allan Poe…could at times be (like Poe Theatre on the Air) ‘inspire[d]…with the vibrations of humor.

“Never Bet the Devil Your Head” is framed as a story told to the mysterious Dr. Maillard, a psychiatrist in a mental institution. In each episode of the monthly Poe series, the dubious doctor (whose name is tellingly pronounced as “Mallard”) interviews a patient who, in turn, relates events in the first person of one of Poe’s classic horror stories. In this case, the focus is not only horror, but also includes dark humor and irony.

The inmate here is “The Author,” portrayed by well-known Baltimore actor and Poe performer, Tony Tsendeas. During the proceedings, the Doctor and The Author exchange wonderful quick-witted repartee. Doctor Maillard also includes his “guest” (the audience), in his meeting with The Author, explaining the malady of the patient in an aside to us. “His natural mental instability, which may also be the source of his creative spark, has been exacerbated by…aesthetics. Literary theory has nearly destroyed the man.” Shades of Poe, Schlegel, and their coterie of Romantic-era artists and poets.

The Author then moves into his tale. It is a story concerning “a rather wayward infant given to vice, gambling and womanizing,” and whose unseemly inclinations only grow stronger in adulthood. This long-time friend of The Author is aptly named Toby Dammit, for he is also given to swearing, but with the unusual choice of phrasing, “I’ll bet the devil my head!” Poe and The Author endeavor to tell a story with a clear moral as to why betting one’s head to the devil is a rather bad idea, culminating when Toby rashly states, “I’ll bet the devil my head [that] never was a bridge constructed in a more advantageous location…”

The episode is chock-full of the high-quality elements we have come to expect of the Alex Zavistovich-directed  Poe Theatre on the Air productions, including spooky music and creepy sound effects of creaking doors and the like. In fact, this installment pulls out all the stops with its vicarious audio experience of visiting a Mexican fiesta, a Chinese New Year’s festival, and even a circus.

Owing to this array of sound effects, “Never Bet the Devil Your Head” is a bit more impressionistic than some previous episodes in the series, — especially in Part Two. This comes in part from artistic choices made in translating the original narrative-heavy Poe story into a dialogue- and character-driven format. Yet these changes make the story much more accessible to the audience of today and indeed offer an enjoyable change in pace. Of course, the best parts are the slightly ghoulish performances of Mr. Zavistovich as the series host, Doctor Maillard, and Tony Tsendeas’ portrayal of the ambiguous character of The Author. Brian MacDonald and Jennifer Restak turn in fine and, at times, whimsical enactments of Toby Dammit and a mysterious voice respectively. Mr. Tsendeas also wrote the very clever script adaptation for this two-part installment in the WYPR/NPR series.

As it is the month of Halloween, this reviewer would have bet his head that the Poe Theatre on the Air crew would have produced a pure horror story, but this darkly humorous tale is most appropriate, perhaps also serving as an understated cautionary tale against rash actions undertaken in both our own lives and those of public figures. Most of all, the show and its timing highlight how Edgar Allan Poe, in addition to being a masterful horror story-teller, could at times be (like Poe Theatre on the Air) “inspire[d]… with the vibrations of humor.”

Part One of “Never Bet the Devil Your Head” is already streaming as a podcast and can be heard here while Part Two will begin streaming in early November.