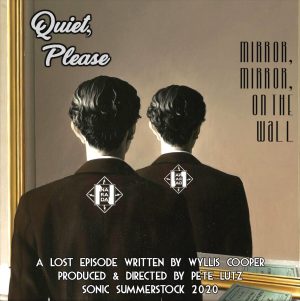 Sonic Summerstock Playhouse offers productions which, among other things, are certain to put one in the mood for Halloween.

Cultural historian Martin Grams’ annual October Mid-Atlantic Nostalgia Convention in Maryland, with its film showings, radio recreations, and lectures on popular culture, was cancelled this year due to the Coronavirus pandemic. Fans of retro entertainment, however, might enjoy another nostalgia-oriented, yet experimental, venue in Sonic Summerstock Playhouse, hosted by the Sonic Society of Nova Scotia. This 11th annual summer event features productions from podcasters throughout North America.

Series host and producer, Jack Ward, describes Sonic Summerstock as “a summer anthology recreating the great shows of the Golden Age of Radio for a new audience . . . an effort for producers from all over the world to recreate old-time radio scripts with their current casts.” The festival actually includes much more, as the audio productions also feature homages to classic movies, vintage TV shows, and beloved comics. All this can be enjoyed for free at the Sonic Society website (now a part of  the Mutual Audio Network).

Sonic Summerstock Playhouse is a series deserving of a listen…for those interested in podcasts that mix the old and the new in creative and unexpected ways.

Perhaps the production most loyal to its original series is “Nightbeat,” a film-noir type offering, with the actors of the Narada Radio Company. The main star Pete Lutz, imitates the cynical, stately delivery of original series star, Frank Lovejoy, in his role as Randy Stone, a newspaper reporter on the night shift. The episode “The Death of Riley” (referencing ironically another radio series “The Life of Riley”) is replete with noir phrasings, such as “all black and white in the light of day, it took the night to add the color and the shading.”

“The Adventures of Archie Andrews” is a local Nova Scotia production of the Lion’s Den Theatre featuring characters listeners will immediately recognize from Archie Comics, Saturday morning cartoons, or the current TV series, “Riverdale.” Featuring Archie and his friends, Betty, Veronica, and Jughead, this lively production is both whimsical and seasonal as the characters all converge at the last minute on a department store to do their last-minute Christmas shopping. Misunderstandings ensue as they try to hide from one another while shopping. Especially charming is that some of the all-American characters of Riverdale have slight Canadian accents.

The most moving production is likely Emily Bronte’s “Wuthering Heights.”  There are excellent impersonations of Golden Age Hollywood actor, Jimmy Stewart, and legendary director, Cecil B. DeMille (the latter as narrator), but the show really takes off when it leaves its Lux Radio Theatre origin and virtual location behind and immerses itself in a much abbreviated version of the novel about Heathcliff and Catherine on the English moors. Brooding and cynical, Karl Werner is an outstanding Heathcliff, while Alexa Chipman is fabulous as Catherine, ever in despair between her longing for life on the desolate moors with the stormy Heathcliff and her desire to be the conventional “Mrs. Edgar Linton, the lady of Thrushcross Grange,” and thus “the finest lady in the county.”  Series co-host and British voice actor, David Ault, makes an excellent but all-too-brief appearance as Catherine’s cruel, then later dissipated, brother Hindley.

Sonic Summerstock Playhouse salutes not just vintage radio series and classic novels but, with the help of Lightning Bolt Theatre of the Mind, also presents a spirited audio drama of the pilot of the gothic television serial “Dark Shadows.” The episode focuses on the arrival of governess Victoria Winters at the mysterious mansion of Collinwood high atop the cliff in Collinsport, Maine. Cutting-edge sound effects in stereo and atmospheric music help render a particularly spooky evocation for this month of Halloween. Halloween props in a dark storeroom in a school with a ghastly history frighten listeners in an original offering called “The Mark of Markus Hellfire,” starring the players of the NoSleep Podcast, including David Ault, who occasionally “puts on the greasepaint” between his hosting duties from the Playhouse’s virtual balcony.  (Parental guidance is suggested for this particular production due to language.)

Another movie-to-audio feature is a production of Ed Wood’s famous (some would say infamous) B-movie “Plan 9 from Outer Space” (again, from Lion’s Den Theatre). This show deftly highlights and even accentuates the original film’s campiness while adding some salty language unimaginable in a 1950s U.S. film due to the strict “Hayes Code,” then in force in Hollywood. “Quiet, Please,” an inventive and creepy radio series created by Wyllis Cooper in the 1940s, known for long monologues, sometimes lasting the entire episode. In this episode, “Mirror, Mirror, on the Wall,” the monologue lasts seven minutes. The cast of the Narada Radio Company takes on the script of a lost episode (thus “resurrecting old ghosts,” we are told) in which Mr. Lutz, earlier the hard-boiled reporter, Randy Stone, plays the very different role of a nebbish named Oliver who meets his Doppelgänger in a mirror.  When upset, Oliver is in the habit of making rash statements about killing people  — often in exotic ways, such as “I’d have brained the man with a T-Square!” The Doppelgänger, perhaps representing the main character’s inner desires, gains the ability to exit the mirror into reality, with unfortunate results.

“X Minus One,” a mid-1950s sci-fi radio show once heard on NBC, is given special attention, as it is revived at the 11th  Sonic Summerstock Playhouse for two episodes. The first episode, “Mars is Heaven,” is based on a Ray Bradbury story, and appears just in time for the 100th anniversary of the author’s birth. Sound effects, solid acting by the Amigo’s Audio Collective, and, most importantly, a well-adapted script concerning spacemen finding dead relatives alive on Mars, makes for compelling listening. “Junkyard,” written by another “golden age” sci-fi writer, Clifford D. Simak, is a story in which an alien presence taps into the memory and drains the knowledge from an earth crew. Even more alien to the listeners of the original show would be a mostly female crew, including an electrifying performance by Tanja Milojevic as the commander trying to solve the problem of her crew members losing their memories, making lift-off from the planet impossible. This gender shift may make the episode more accessible for today’s audience. As series founder Jack Ward explains: “Some producers will take classic radio scripts and modernize or customize them in various ways, and others will do more faithful recreations.”

We end our review of Sonic Summerstock Playhouse on a local note. Baltimore producer (and MD Theatre Guide contributor), J.V. Torres, turns in an unusual production and riveting performance in a reconstruction of a 1928, religious-themed audio play from the radio series “Biblical Dramas.”  The episode, “The Third Soldier,” revolves around a conflict between father and son, which also represents conflicts between the old Roman world and the incoming Christianized Roman empire. “I chose this episode because I found that the characters’ choice of words in describing Rome in their time parallel what many others have said about the governments of their time,” Mr. Torres tells us. He has also employed several actors from the main series in which he is writes, produces, and acts — “The Rise of King Asilas.” Mr. Torres addresses commonalities between this 1928 radio episode and his own series. “Both productions deal with reflection from a religious standpoint at some level. They are parallel in their points of view of humanity, and in their devotion to the divine during a period that religion is in a decline.”

Sonic Summerstock Playhouse  is a series deserving of a listen, not only for nostalgia aficionados, but also for those interested in podcasts that mix the old and the new in creative and unexpected ways. Episodes from the 11th season can be streamed free of charge here.