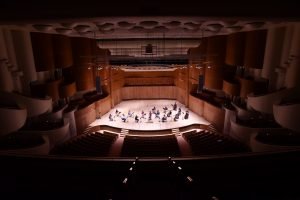 As the pandemic drags on, the performing arts have worked hard to adapt to a safe and accessible format. Theatres have hosted outdoor shows and online staged readings. Performances from well-known groups have even been televised. Creativity is key in keeping the arts alive and the performers and companies above water. In these uncertain times, the Baltimore Symphony Orchestra created BSO Offstage, a collection of online content highlighting artists, composers, and the basics of classical music education. Their newest Offstage series is BSO Sessions, a digital concert series that takes viewers behind the scenes at Joseph Meyerhoff Symphony Hall with interviews and performances with orchestra members.

In their inaugural Sessions episode, The Return, the BSO string orchestra performs pieces by Litszt, Hindemith, Elgar, and Puccini. The camera pans the stage and the empty theatre, and the pieces are interspersed with commentary and explanations. Between the performances, the viewer is treated to interviews and a behind-the-scenes look at the inner workings of the Baltimore Symphony Orchestra. Associate Conductor, Nicholas Hersch, and Assistant Conductor, Jonathan Rush, are interviewed, and their distinct conducting styles are showcased. During the performances, the camera pans the orchestra as if the show was a sporting event, allowing the viewer to pick up on details of the performance they may miss with a live event. As the orchestra performs Hindemith’s “Five Pieces for String Orchestra,” the camera zooms in on Concertmaster, Jonathan Carney, as he is featured, emphasizing his exacting precision.

The BSO Sessions episodes are a gift to fans of the BSO. They are affordable and accessible, enabling community members to support the arts from the comfort of their own homes. They also permit viewers a deeper look as they follow the musicians from rehearsal to performance with an almost documentary-style approach. They combine beautiful music, interesting videography, and candid interviews to give viewers a better understanding of the BSO as a whole.

However, the episode isn’t the respite from COVID-19 life that viewers might crave. Orchestra members and conductors speak frankly about the effect the pandemic has had on them and the BSO as a whole. The masked artists playing the pieces from socially distanced chairs onstage in an empty theatre are a stark reminder of how different things are. Nevertheless, the haunting beauty of the eerie performances shows the resilience of the performing arts, despite it all.

Access to BSO Sessions episodes can be purchased here. Episodes 2 and 3 will be available starting October 21st and October 28th, respectively, and November episodes will be announced in the coming weeks.