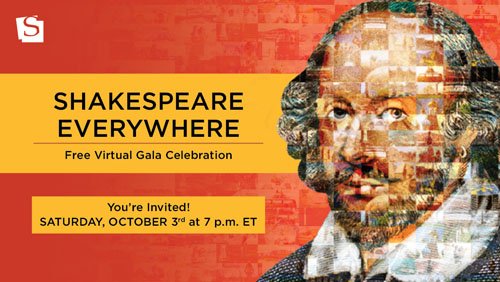 Somebody should bottle the boundless energy of Simon Godwin, the Shakespeare Theatre Company’s Artistic Director, who hosted a fabulous fundraiser on YouTube on October 3. His enthusiasm is bound to cure the ills of our society, or, at least, provide some hope that Shakespeare’s words will once again be spoken to a live audience.

You can always count on two dames and a male Brit to celebrate Shakespeare in grand style.

A clever scene in the hour-long show depicts Shakespeare’s famous quotes voiced around the world in 25 languages in 25 countries. And I was moved by the young performers who articulated Will’s familiar lines, “”We have seen better days” (“Sir Thomas Moore”) near the mural of Ruth Bader Ginsburg; “To thine own self be true” (“Hamlet”) in front of the Supreme Court and “There is no darkness but ignorance (“Twelfth Night”) in front of Ben’s Chili Bowl.

The pros offered too-many-to-list memorable moments, especially Ralph Fiennes, weeping for Cleopatra, as he articulates Antony’s dying soliloquy in the desert. You could tell from his passion, this actor lives for theater. On a lighter side of Shakespeare, Dame Helen Mirren gets to play her dream role, Juliet. Her take is much more knowing and mature, even when she whispers.

Maureen Dowd is hilarious when she admits she had a crush on Hamlet. “He taught me about men, impossible men,” she said. “Is there any other kind?” She admits she also liked Macbeth as a boyfriend and considered Othello, though “double dates with Iago was a buzz kill.”  Looks like another career for this New York Times columnist…take note Simon Godwin!

Music abounds in this fast-paced program with a family of musical prodigies from South Africa; operatic tenor Russell Thomas singing an aria from Verdi’s “Otello” and members from the castoff James Baldwin’s “The Amen Corner.”

Perhaps Dame Judi Dench sums up the underlying theme of the program when she looks directly at the camera and calmly suggests, “I can’t wait until the theater comes back. We tell stories…that’s what we do. We have to keep our fingers crossed.”