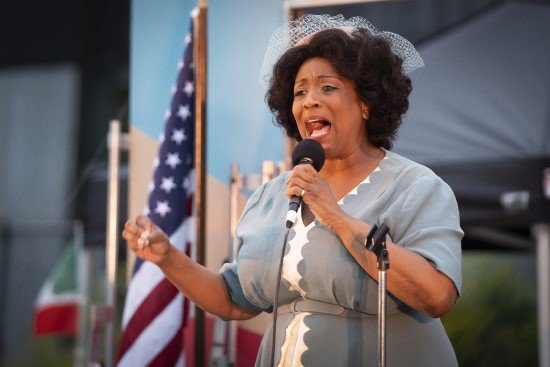 On Friday, Arena Stage produced its first live production from the Transit Pier Floating Stage at the Wharf since their closure due to the pandemic. The performance is an adaptation by Cheryl L. West from her play, “Fannie.” This adaption, called “Fannie Lou Hamer, Speak On It!” is directed by Henry Godinez.

This timely production is a one-woman show featuring E. Faye Butler as Fannie Lou Hamer. Butler is an award-winning actress who has made numerous appearances at Arena Stage. However, the real star of this play is Fannie Lou Hamer. Hamer was a courageous and strong woman who was an important part of the Civil Rights movement of the 1960s. Her work and bravery fighting for the right to vote for millions of southern African Americans may not be as heralded as Dr. King’s and others, but her battle was just as hard. She grew up the youngest of twenty children. Her family was the victim of horrible racism, and Fanny had to leave school at a young age to help her aging parents. Even after she contracted polio, she picked cotton to support her family. When Fanny led drives to vote she was arrested and beaten within an inch of her life at a police station, leaving her with permanent injuries. She was also sexually assaulted and demeaned by the police. However, Fannie knew that power was in the vote. During these times, we know the importance of each vote. Many have that right, especially in the South, due to the unfailing efforts of Ms. Hamer and others.  We need to remember that is was just not the right to eat a lunch counter, but the right to have a say in our democracy which was at the core of the Civil Rights movement and legislation.

Musical direction and arrangements are by Felton Offard and sound design is by David Naughton.

Arena Stage will have daily productions from October 23 – October 30, 2020. Performances start at 5:30 p.m. except for two 1:00 p.m. productions this weekend. There are no tickets available in part due to limited seating made necessary to keep social distancing regulations. There may be some standing room spaces available. To check on that availability, go to this link. There also may be a video sponsored by Nelson Mullins in the near future.

Fannie Lou Hamer understood your vote is your voice. We all need to vote whether by mail, in-person during early voting or on Election Day and remember how hard Ms. Hamer and others worked to insure this right for all of us.

Running Time: 50 minutes with no intermission.

If you miss Arena Stage productions, go the their website and see what they are offering online now and hopefully live in the near future.