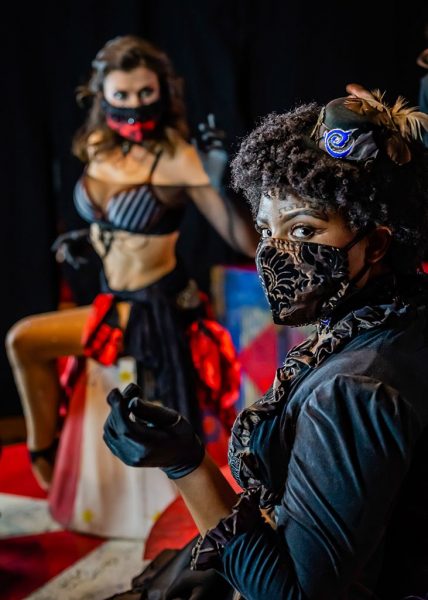 Erik Satie’s “La 1ère Gnossienne” — usually considered a quietly contemplative, slightly melancholy piece of music — is rendered positively spooky in the skillful hands of Sound Designer Meghan Pelfrey, who blends it with atmospherics by Leslie Caulfield as a bed beneath the opening section of “Plague Tales.”  This imaginative design is typical of consistently excellent work by Phantasmagoria (a company that appears regularly at Baltimore’s Theatre Project) in their first virtual presentation streaming through November 2.

This production is wonderfully well made and beautifully performed…

Phantasmagoria is a company based in Orlando, billed as a “Victorian/steampunk storytelling troupe.” Their current production is loaded, not only with technical brilliance, but with a large ensemble that delivers knockout performances. “Plague Tales” is an original compilation of stories by Edgar Allen Poe, W.W. Jacobs, and the like, presented not as dramatization, but in group recitation form. Choosing texts from the public domain allows the group a lot of artistic leeway (and saves money on licensing), yet this script by John DiDonna (who also directs) paints within the lines.

Dazzling costumes by Shelly Henriott include masks on some of the actors. Those wearing them sound predictably muffled, and their lines can be tough to understand. Those without them obviously escape this problem but at the expense of potential questions about safety measures taken. Nevertheless, all of the visual design elements, including some masks and striking makeup work by Gina Makarova, combine with a circus-like set by DiDonna and Dion Leonhard DiDonna and superb lighting by Draco Aleksander to create a unique, compelling world.

But it doesn’t stop there. Phantasmagoria also tosses in a dizzying assortment of performance and technical wonders including aerial work, dancing with fire (performed outdoors), puppets, and more surprises.

This year has taught us that there’s just no substitute for the audience experience of sharing a darkened space with live performers. In a visually stunning work like “Plague Tales,” that absence of immediacy is felt more painfully. This production is wonderfully well made and beautifully performed — worth seeing this weekend, certainly — but one feels more strongly a desire to experience it someday, in person.

Advisory: Elements of horror – recommended for ages 8 and up.